This trek was my 2nd 14er attempt. After having such a great experience on Quandary last year, we were ready to give it another go this time around. As an added measure, Mom decided she wanted to give this 14er thing a try and joined us under the ambiguous understanding that this was an "easy" hike.
Two words come to mind as I recollect the Sherman hike: mining and windy. There is plenty of leftovers from the mining days that can be seen along this hike especially during the drive past the Leavick site. The Dauntless mine is passed early on in this hike while still on the road. The Hilltop mine is seen around 12800 along the trail along with several other sites.
We parked along the road around 11,880. This is about 1/4 mile short of the current (2010) gate closure at 12,000 ft. The first half of the hike follows the old mining road as it gets rougher. This takes you up to near 12,800 where the trail finally leaves the old road. From the end of the road near 12,800 its an easy hike west up to the Sherman-Sheridan saddle. Memories of this saddle are that it was terribly windy. I recall even after having a hood and a hat on the wind was bad enough to hurt my ears.
From the saddle its an easy 1.5 mile hike up the southwest ridge to the summit. We had great weather for our time on the summit while we had lunch and rested up. There was much debate on the way down as to how many miles this hike ended up being. History in the years since this hike has had claims from Mom claiming she was told it was only a mile or two hike. When it ended up being nearly 6 it was a "shocker."

This is the original 1992 track, but here is a track of one of our more recent hikes up Sherman. It shows almost exactly where we stopped along the old jeep road.

In my records I had but one photo from this hike. It shows Marcia, Mark, and David atop the summit: 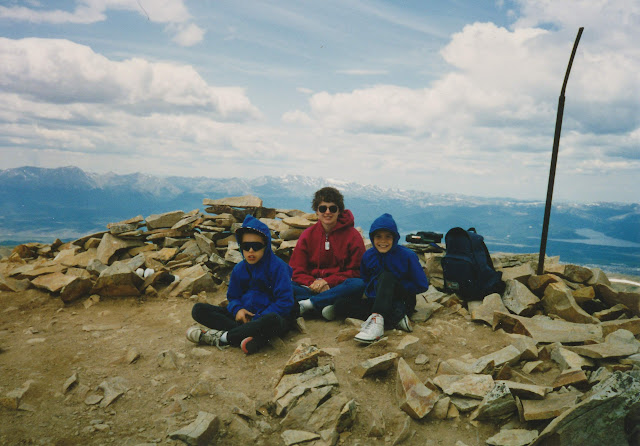 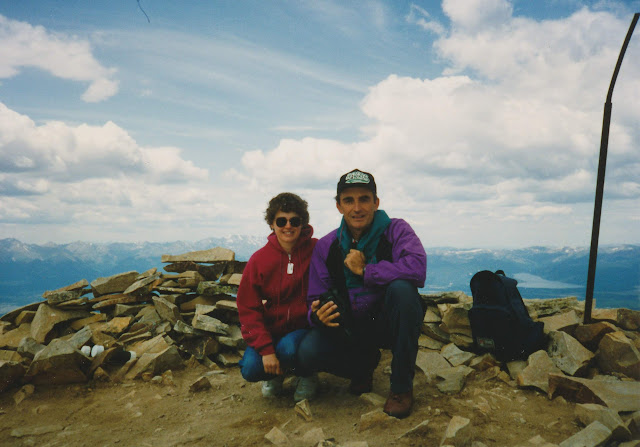