Spent a lot of time reading routes and TR's for the Harvard and Columbia combo, so we were pretty sure we knew what to expect. We set out for the TH at 3pm from Frisco, it was my friend Matt and I, plus my father and 5-year old son. We grabbed some Subway in Leadville and ate it at the trailhead. We spent about an hour and a half hiking in 2 miles or so to about 11000 feet and found a nice established campsite just off to the left (south) of the trail. Had a nice fire that night despite the wet ground conditions.

Matt and I set out at 4am that morning for Harvard. As we ascended through Horn Fork Basin we had moments of disappointment that we couldn't see this beautiful basin in the sunlight. That disappointment quickly left as we were treated to a sunrise over the eastern slopes of Harvard. 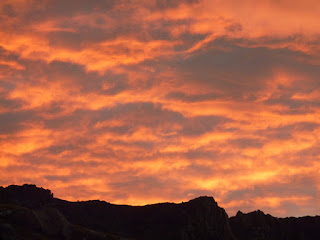 It looked like the sky had been lit on fire. The hike up Harvard went easily on the well-established trail and we summited at 7:46am, just under 4 hours from camp. The last 50 feet or so getting onto the summit block posed a few challenging moves, but it went well.
The traverse I'll describe in greater detail through my photos below. We tried to take a thorough account of our trip to Columbia. We hiked at a contour of 12900 after descending from Harvard. The traverse took nearly 5 hours, mostly due to our slow pace through the talus.

Clouds were surprisingly kind to us on Harvard and for most of the traverse over to Columbia. We'd read the dangers of being on the east side of the Harvard-Columbia ridge and this is so true. You have no warning of the storms coming while you're on the "dark side of the moon" as it would seem. We had darker clouds finally rolling in as we were about 500 feet from the summit of Columbia. We had no thunder or lightning signs yet so we made a push to Columbia's summit, made it, spent about 10 seconds up there, and quickly descended as we finally heard thunder in the area. Got rained on for a good 30 minutes on the descent from Columbia.

Trail up Harvard and through Horn Fork Basin is very well established and easy to follow. There is one trail intersection along the North Cottonwood Creek approach to be aware of. The descent from Harvard is well-marked to about 13450. This is at a point where your options are to ascend on or over the 13500 point or to descend the grassy slopes way around it which is what we did. After this point there is no trail to speak of until the summit of Columbia. The descent down Columbia is somewhat clear. As many TR's have pointed out, DON'T DESCEND TOO EARLY. Follow Columbia's south ridge until a clear descent trail is found following a western arm that takes you more gradually down into the Horn Fork.

3:53 from camp to Harvard's summit
5 hrs Harvard to Columbia
2:50 from Columbia to camp

I used my Nokia N800 tablet with Maemo Mapper to put together a GPX file which I then put into KML. Please feel free to download it and use it as you see best. At the least, it can give someone an approximation of the route we decided upon for traversing up to Columbia.

If you would like to see all of my photos from this climb you can click the photo below and it links to my Google Photo Album: 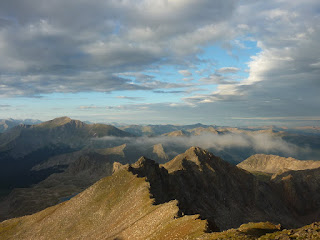