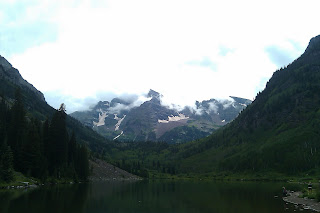 This hike came on an "off-day" from our 14er hikes of 2010. This perhaps is better described as the "family" day for our trip. We took the entire group of us over Independence Pass this day and to Aspen and on to the Bells. It was a mostly cloudy day so the pictures were decent at best. We had a picnic lunch at Maroon Lake and did some walking around there until the hiking instinct kicked in and we decided to make a run up to Crater Lake. 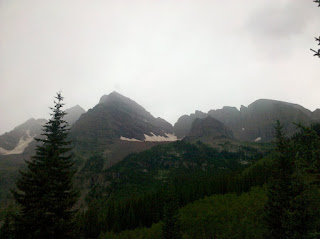 I had vague memories of this hike from the last time we were at the bells which was in the late 90s. The first mile of the hike hugs the north side of this valley ascending the slope above Maroon Lake. It is predominantly in the trees as it gains elevation with occasional views down to the Lake and up to the Bells.
At around 9900 feet the hike plateaus for just a bit. It is also around this time last the hike leaves the side of the valley and heads more down the middle. Here the hike actually follows below a short ridge-line to the south and flatter terrain to the north. In this section the hike meets the turn off for Pyramid Peak which is marked by a large rock cairn. This takes place about 1.3 miles from Maroon Lake at about 10,120 feet elevation. We hiked another quarter mile past that turn-off to the point where we could begin to see Crater Lake. It was here we were quickly forced to turn around. The clouds were evidently bad and the rains quickly followed. Luke and Denny had an umbrella and better raingear so they decided to take their time on the way down. Matt and I started jogging back down the trail to at least get into tree cover. To make matters worse we saw some lightning in the area which made us nervous as the upper section of our hike was somewhat exposed.
Matt and I upon making it into the trees started to slow down as the trail became wet. We found good bunches of trees to stand under and stay dry. We would do this for several minutes as other hikers passed us and then we'd take off again to head for the next bunch. With the uncertainty of the weather, and having Luke out there, we finally waited up awhile under a tree bunch to make sure Denny and Luke made it down from the exposed area above 9900. Once we found they'd made it we turned up the speed once more to head for Maroon Lake. We hit the flat area and then turned it into a near all-out sprint for the cars. We were drenched and it was getting cold! Luke and Denny turned out to be about 20 minutes behind us by the time we all made it back. This whole trip was indeed one rainy mess and today exemplified that well.

The track file I took for this hike was done with My Tracks on my Moto Droid smartphone. I started it at our turn-around point which means it actually only has the descent portion of our hike. Here it is for download:

Here are the photos I took from this hike and a few from around Maroon Lake: 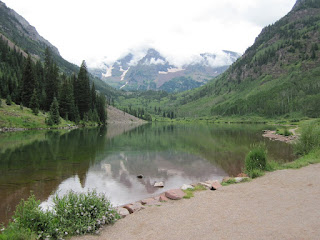 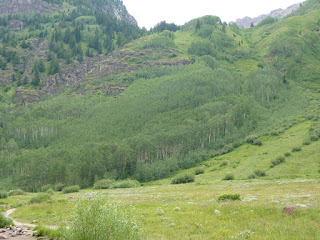 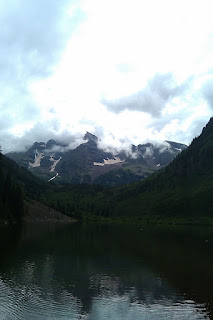 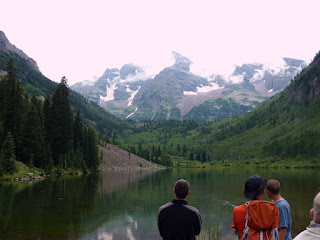 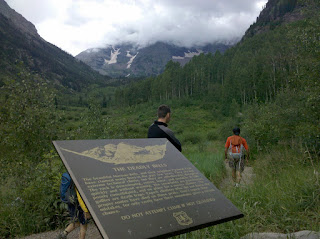 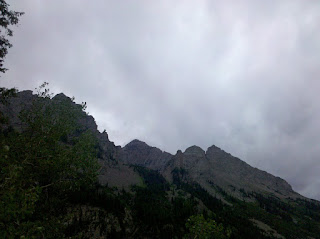 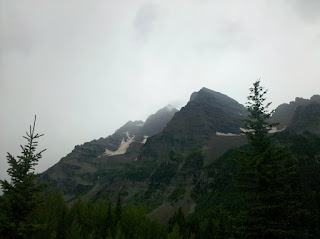 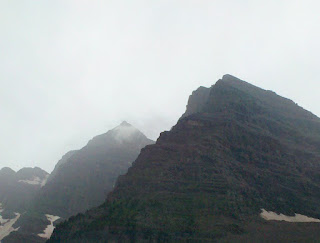 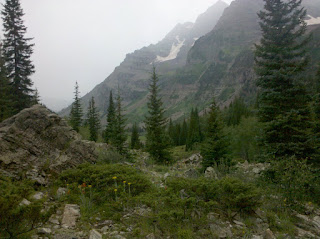 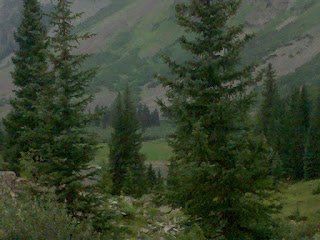