My initial plan to explore Boyne this year was to tackle the Red Loop which is rated at 9 miles. I was hopeful with a 2 1/2 hour window I could get it in by running a chunk of it. I had studied the primitive map off Boyne's website to some extent hoping it would be fairly easy to follow. Well, as you'll see from the rest of my report that hope would not exactly come true. 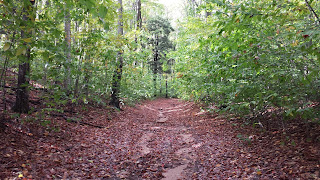 When break time began at 3pm during our Conference I headed out quickly to our van to change into some suitable hiking/biking clothes. I also grabbed my light backpack to put a snack and some drink into. As I changed I was checking the radar. It was very cloudy but no rain specifically on the radar. I started out on the south side of the resort buildings and decided to make this more of a trail-run than hike. I found the Red Loop start along the south end of the east slopes of Boyne Mt. It worked up through an initial set of trees and then hit an opening where the trail meets the paved "trail". I had found this spot in 2011 as well and followed the paved road for a bit. I did the same this time around. I would later find on Wednesday morning that the red loop trail crosses the paved trail and heads into the woods across the way. 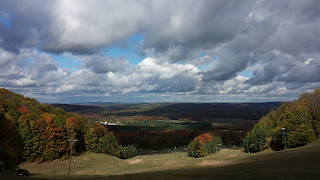 As in 2011, I didn't stay on the pavement long and I decided to bushwhack south up the sloop to the high point and did. At first there were actually some wooden steps put into the slope and I wondered if this meant a trail past them, but there was nothing. On top the slope I followed the sandy slope to the west that is a part of the frisbee golf course and this put me at the retreat center once more. The map showed several red, blue and green loop trails all nearby so I ended up following the wide trail to the northwest that I had done in 2011. 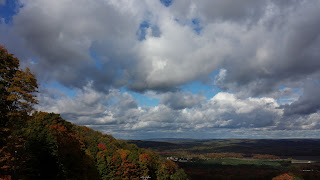 This again found me on the dirt road that leads down from the top of the main chairlifts. I followed that road as its pavement began to where it hits the ski slopes heading to the north. I found the blue/green/red trail heading down the slope as I had started in 2011 and it winds back and forth through switchbacks as it descends. In studying the maps in hindsight I find that I missed where the red trail cuts off NW from this and instead following the blue and green to the NE as they head towards Creekside. I began to realize this error as I neared Creekside and the trail was heading further and further from the red. So at Creekside I bushwhacked across the hill a bit until I found trail again. This worked well and I was pleased with how the new trail went and it had a few red markers along the way. This went well until I realized that it was taking me right back up to where I started high on the slope. I was on the red and essentially went in the wrong direction. 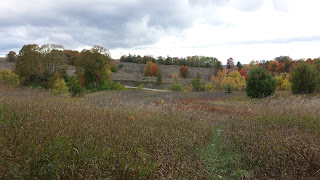 At the top I sought out a new trail and ended up on what I now discover was the Black Downhill loop. I followed this for awhile and lost it ending up on the edge of the golf course. It was this time my frustration with the crummy maps set in. I bushwhacked down the hill in the midst of the trees. To make matters worse the drizzle turned into a shower and I was just getting wet. I finally realize that a paved road heading to condos was close by so I bushwhacked some more through some thicker brush through someone's backyard and onto the road. I was able to follow this out to the Mountain Pass Rd. 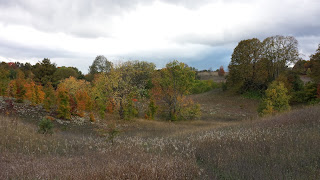 I ran up the MP Road for a tenth of a mile and realized the red loop ought to be just up the hill from where I was. So once more I bushwhacked and headed up the slope a bit and indeed found the loop. I headed west and found this finally curled north as I suspected the red loop would. I was able to keep the trail even as it moved east. As I hit the map feature "Danger Will Robinson" it appears I lost the Red again at a junction when it moved north. It appears I followed the blue moving east but at another near junction picked up the red moving east again. The forest was thin in these areas and several junctions were nearby. The occasional trail signs I saw were of little to no help. The red moved north again once I was on it and left the woods to a beautiful tall grassy meadow. I was hopeful at this point until the trail started heading west again when I knew I wanted to be moving east. Again, I was on the red and essentially heading in the wrong direction. 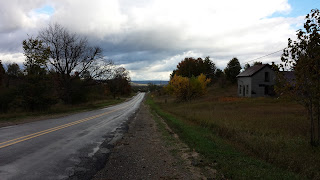 At this point my time was beginning to run out. I had told Sarah we'd meet up at 5pm and I knew I needed to be making headways. I bailed on the trail and instead tracked through the grass a few hundred feet out to the highway. I ran along the highway for a half mile til the meadows ended at a line of trees. I could tell from the map I could follow the tree line and rejoin the red loop inside the woods. This worked. I followed the red again heading east for awhile to an opening. It was here finally I grew tired of never knowing if I was on trail and I headed to the MP Road. I ran this the rest of the way back to the resort parking lot.

For Tuesday's break time Sarah and I wanted to be able to do something together. Since our biking plans had been rained out on Sunday we decided this afternoon, with its perfectly sunny skies was the time to go. When break time arrived at the conference Sarah and I headed to the parking lot and grabbed the bikes out of the car. Neither of us were dressed for the occasion unfortunately. I had brought a workout top but forgot shorts, so I was stuck with my dress pants. We headed out of the parking lot and started onto the Mountain Pass Road hoping to do the entire gold bike loop which was about 8 miles. The MP Road proved to have several small hills on it and these quickly tested Sarah on her bike. Much to our dismay we found our her handlebar was loose, and much to our greater dismay, I found that my hex tool set was not in my light backpack as I had hoped. We used fingers and keys to try and tighten the hex nut tight as we could to keep the handlebar steady but were unsuccessful. Sarah was able to manage it down the hill off the MP Road to the clubhouse area of the golf course.

At the clubhouse we ran into a young man working and asked him if they had a hex tool for us to borrow for repairs. He looked around but was unsuccessful. So we opted to trudge on. We biked down a road from the clubhouse and then turned on a path that was either for bikes or golf carts, or maybe both. We followed another path at a junction thinking it was the bike path cutting off but it dead ended. So we trailed back to the junction and continued on ahead. I will say, for the first time at Boyne, from this point onward it was fairly clear following the rest of the gold loop.

We had some beautiful views of the golf course and the meadows as the bike trail worked between the fairways. We pretty much ended up walking all of this as the uphills and the loose handlebar make biking difficult for Sarah. As the trail steadily gained elevation up the hill we ran into a couple of Pastor friends of ours enjoying their break time with a round of golf. At the top of the hill the trail we found still wound through another two sections of forest along the upper part of the hill and then popped out at the retreat center. 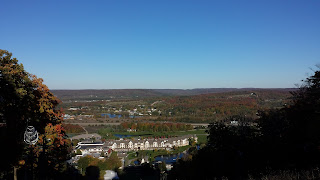 From there it was a steep downhill to an intersection. Turning left goes up another steep hill to the top of the main lifts. I biked up this stretch on my own as Sarah began the walk downhill the other direction. This was a haul to bike it up and it was relentless. On the plus side I was able to zoom downhill and caught up with Sarah in about a minute as the bike trail makes its way out into the open slopes on the east side. I noticed at this point that the clock was beginning to near 5:30pm. We wanted to get into the conference room for the banquet and get seats so I biked ahead to the car to start loading my bike and changing clothes. It wasn't too long and then Sarah also joined me at the car.

This third hike was a bit of a spur of the moment idea. I figured if we got to Boyne early enough this morning I would have an hour to get another run in. I wasn't sure exactly which track I wanted. Running the whole gold loop was tempting but I didn't really want to be on pavement the whole time. So I opted to start up the Red again and descend the north side on the usual blue/green section which I usually was on and then see what time it was.

I held a running/jogging pace the entire time on the mountain today whereas on Monday I had gone to a hiking pace at several points. I followed the red loop up from the south side of the mountain again and this time I followed it perfectly to the top of the mountain and along its crest. And again as I passed the chairlifts and the top of the golf course I then hopped onto the blue/green section that cuts off to the southwest. In here I had contemplated hitting the bottom of the hill and then retracing my loop back up and over the mountain. But time was just late enough I felt I would continue to the bottom and head back.

As this trail passed through a beautiful section of evergreens, and then a meadow near the MP Road I must have lost it again. I crossed over the road and ended up finding some open "trail" and headed east on it past a maintenance area where I picked up the red/green/blue loops as they ended up near some tennis courts as the edge of the resort. I was back by about 8:40am and had time to clean up and head into our last conference session by 9am.