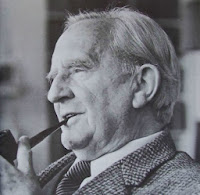 I ran across this quote of J.R.R. Tolkien on twitter tonight and of course it got me thinking:

"Fantasy is escapist, and that is its glory. If a soldier is imprisoned by the enemy, don't we consider it his duty to escape?"

This quote is recorded in several writings of Tolkien including "The Tolkien Reader".  I find it sums up Tolkien's motivation behind all his sub-creation of Middle Earth rather well.  When people would ask, or even criticize him, about the lengthy hours and obsessive moments spent over his many works, this is how I would imagine him responding.

As I consider this quote more I find that while it works for Tolkien, it may not work for all fantasy lovers.  Here is what I mean.  For Tolkien his escape from this world was into a world of his own creation that was reflective of his core beliefs.  Middle Earth was just that.  It has intertwined all throughout a deep Christian theology which Tolkien himself personally held.  For Tolkien to escape into Middle Earth was to escape into the very things he held to be true, which also happened to be Christian.

Contrast that to the many fantasy lovers today who also escape into worlds such as Middle Earth, or that of Star Wars, or that of Harry Potter.  For many of them it is an escape into a world that has no personal connection.  It is a fan's obsession that may hold no deeper connection other than to be a usurper of their time and livelihood.  In this sense, the escape into fantasy may not be all that glorious.

I believe that in the aforementioned quote Tolkien was ultimately alluding to the "escape" that God provides us in faith.  That as Christians fall deeper and deeper into God's Word in Holy Scripture we too can escape this world in which the enemy, that is Satan, acts as overlord.  Christians should seek to escape this world for we are but mere strangers here after all.  And as a prisoner of war escapes from his captors, we should take as many others as we can with us.

Another quote  of Tolkien's seems to agree with this thought, that Christianity is the ultimate "fairy story", the great true myth and fantasy:

The Gospels contain a fairy-story, or a story of a larger kind which embraces all the essence of fairy-stories. ... But this story has entered History and the primary world; ... It has pre-eminently the "inner consistency of reality." There is no tale ever told that men would rather find was true, and none which so many sceptical men have accepted as true on its own merits.

As we find various stories in our world to escape into, and hours are spent reading and digging deeper into the histories of our favorite stories and fantasies, let us find ourselves falling in love with the greatest tale ever told, the true tale, the one of Jesus Christ.