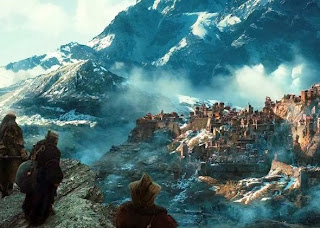 If you read on and don't wish to know what happens in The Hobbit: Desolation of Smaug don't say I didn't warn you.


.
.
.
.
.
.
.
.
.
.
.
.
.
.
.
.
.
.
.
.
.
.
.
.
.
First of all, I loved it!  When I had first seen An Unexpected Journey I had several reservations about it after having returned home.  While it was still a great movie it hadn't lived up to the impossible benchmarks set by the Lord of the Rings Trilogy.  Desolation of Smaug comes really close.  The character depth in this second installment of The Hobbit was in my opinion incredibly well done.  The storyline did a fantastic job of tying scenes from beginning to end together.  And while this second film became more divergent from Tolkien's book as the film went on, it still developed a worthy story of its own.

One of my favorite storylines in the film was the increasing concern for Thorin and his will falling claim to the allure and the destructive power of the wealth under the mountain.  As Bilbo and Smaug talk it is ironically the dragon who first points this out.  He warns Bilbo that Thorin cares nothing for him and the treasure and the arkenstone in particular will bear this out.  Some time later Balin also begins to notice a change in Thorin as the nearby treasure begins to grab hold of him.

I was also intrigued by the storylines of Thranduil, Legolas, and Tauriel.  Of course, Peter Jackson found a way to bring the elves far deeper into The Hobbit than they ever were in the book.  And who can blame him, the elvish race just rocks.  I liked the contrast of Thranduil's isolationist tendencies with Tauriel's care and concern for all the peoples of the world.  And then there was Legolas in between them both.  I think this will help add depth to Legolas' character in the Lord of the Rings when all the films are said and done.

Lastly, the ending of the movie was, well, a shocker.  The whole of the theater screamed out in horror.  We were awaiting the awesome scene where Smaug was to attack Lake-town and Bard was to have his moment of fame.  And then, suddenly silence.  The movie ended.  Smaug was in flight, having left Erebor, and then ... roll credits.  Noooooo!!!  My wife put it into perspective for me as we watched the credits through: "C'mon, its not that bad, its only one more year til we see the end."