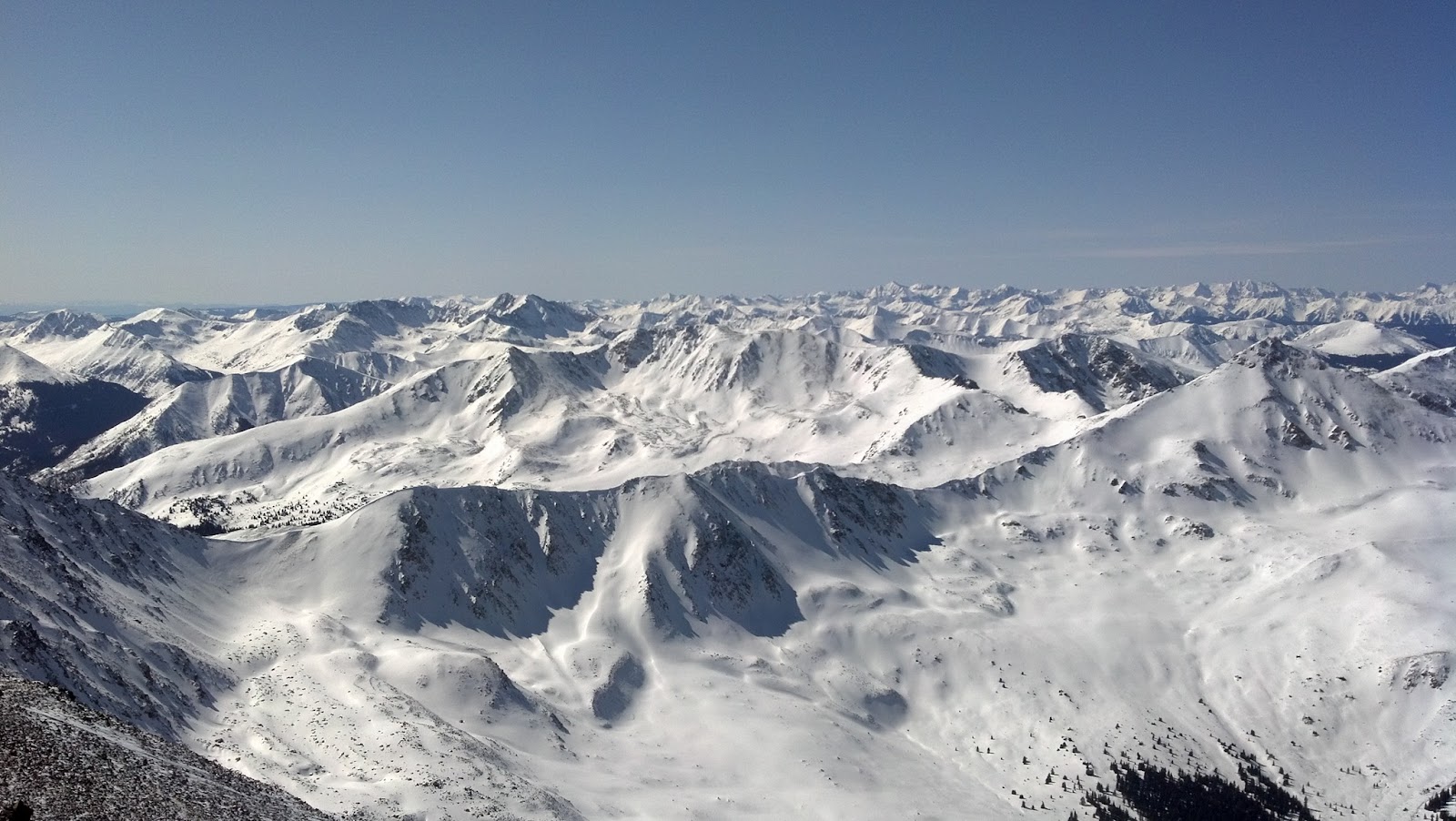 Its one thing to go out for a fun hike on a nice summer day.  Its a good thing for us all.  Find a trail, watch for rain, and just go for it.  Heading for a mountain summit is even a fun and very achievable summer objective for the physically fit.  But how about in the middle of winter?  Well, that's a whole different ballgame.

My hiking partners, that is, my father and brother and I asked that question back in 2010.  How about a winter summit?  Why not?  We had already begun to accumulate some of the necessary gear from when we'd encountered snow on our summer hikes and so it came down then to a matter of planning.

This year I'm making plans for my 4th winter ascent and its still just as fun as the first.  As I've worked my way through plans for this year's hike it seemed appropriate to share some of our tips and tidbits of learning. While there are a great many much more learned and experienced individuals than myself in the realm of winter mountaineering, I do have the privilege of having an audience of fellow flatlanders who are curious about what this is all like.  Our experience is we found it is possible to live near sea level and visit the mountains once or twice a year and still make the mountain tops, even in winter, accessible to us.

Using pictures and experience I've gained I want to share with you some of the biggest concerns we deal with when going from your average summer dayhike into a full-blown winter mountain hike. 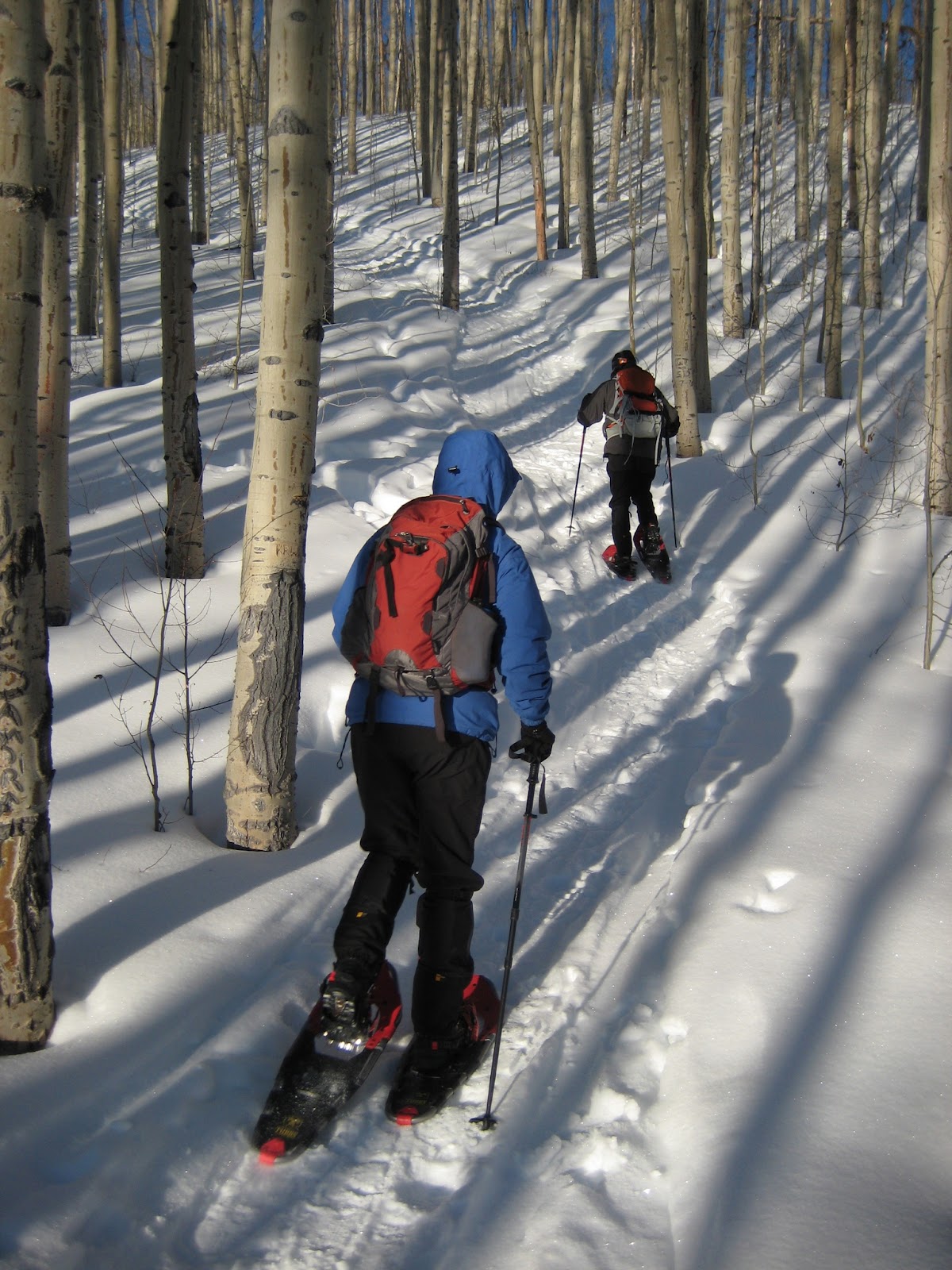 In this photo you can see us working up the Mt. Elbert trail with snowshoes on.  When hiking through powdery and deep snow, without flotation devices such as snowshoes a hiker will begin to post-hole.  That happens when your legs punch through deep snow and it comes up to your knees or higher making walking very difficult, slow, and exhausting.  The snowshoes manage to keep this from happening. 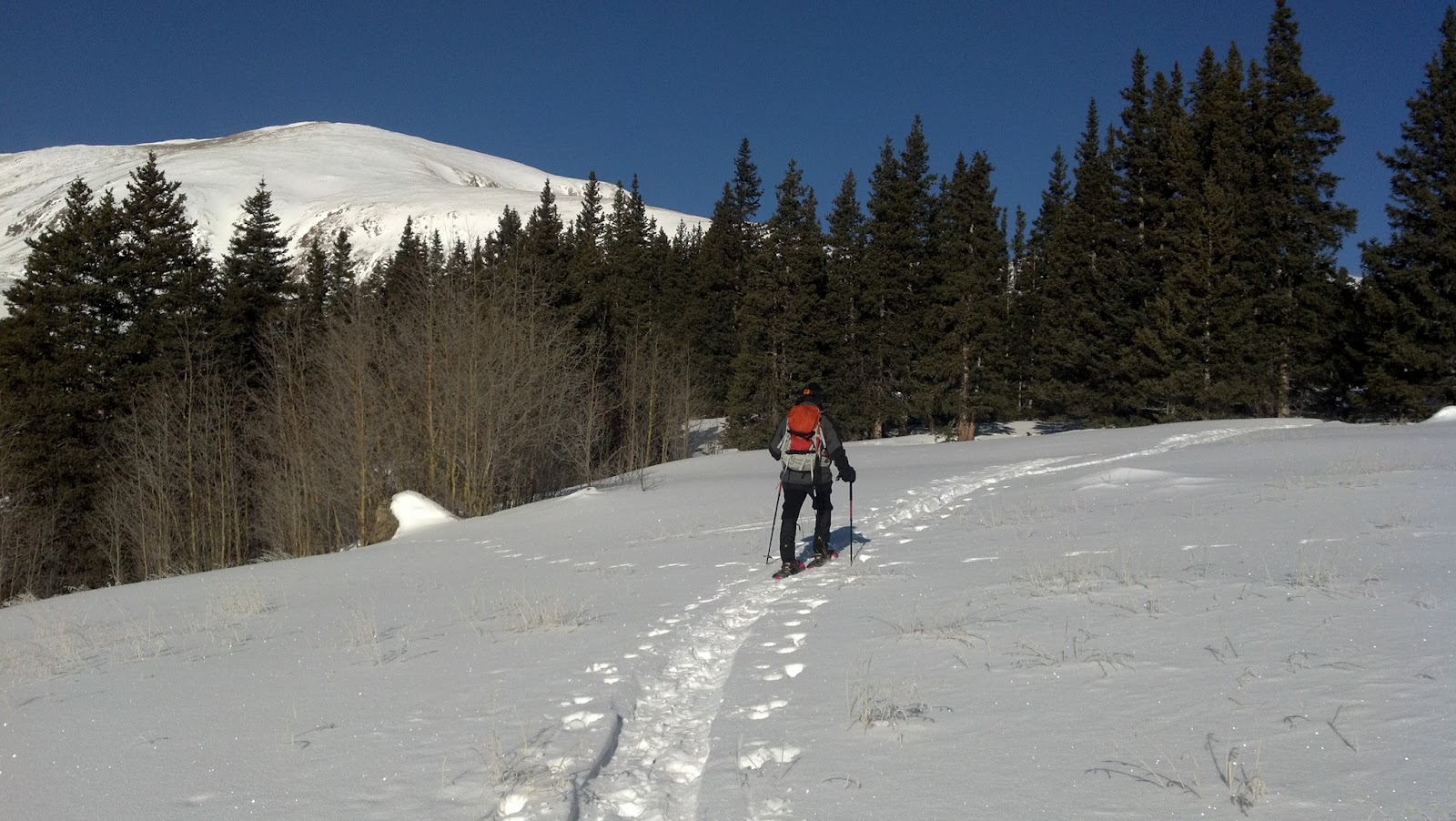 When we're really fortunate we'll be on a trail someone else has already compressed the snow with their own steps which creates a trench.  When that happens even the snowshoes can sometimes become no longer necessary.  In my picture to the right you can see what a good trench looks like.  It is a peculiar joy to hike in a well-made trench.

In the following pictures you can see another example on the left of a deep trench into powdery snow.  On the right you can see some of what a mess it can be working through deep snow without a good trail or flotation devices.  We ran into this problem on Mt. Royal near Frisco, Colorado.  Even with snowshoes we hiked up through several feet of snow on a steep slope and had quite a time of it. 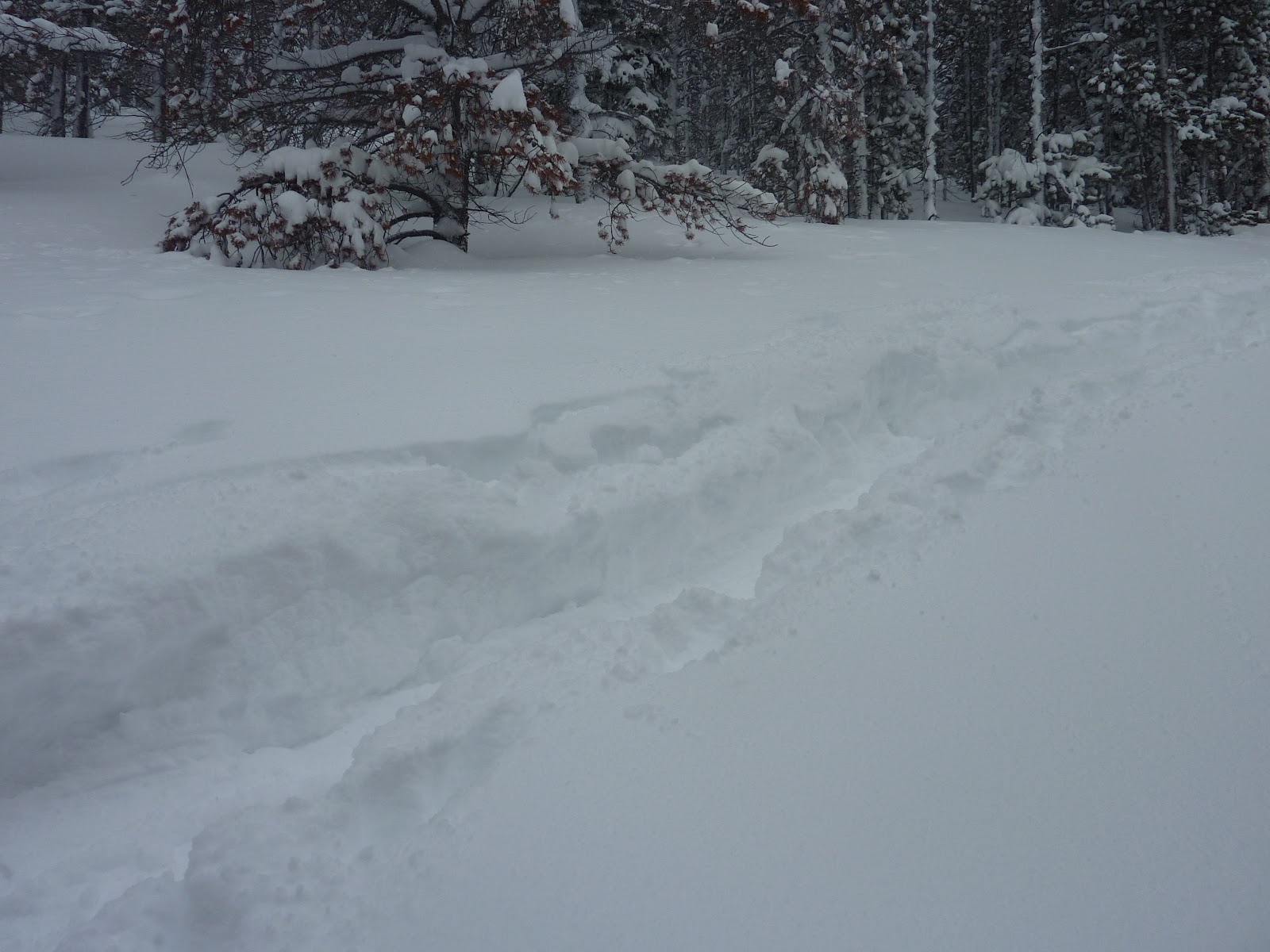 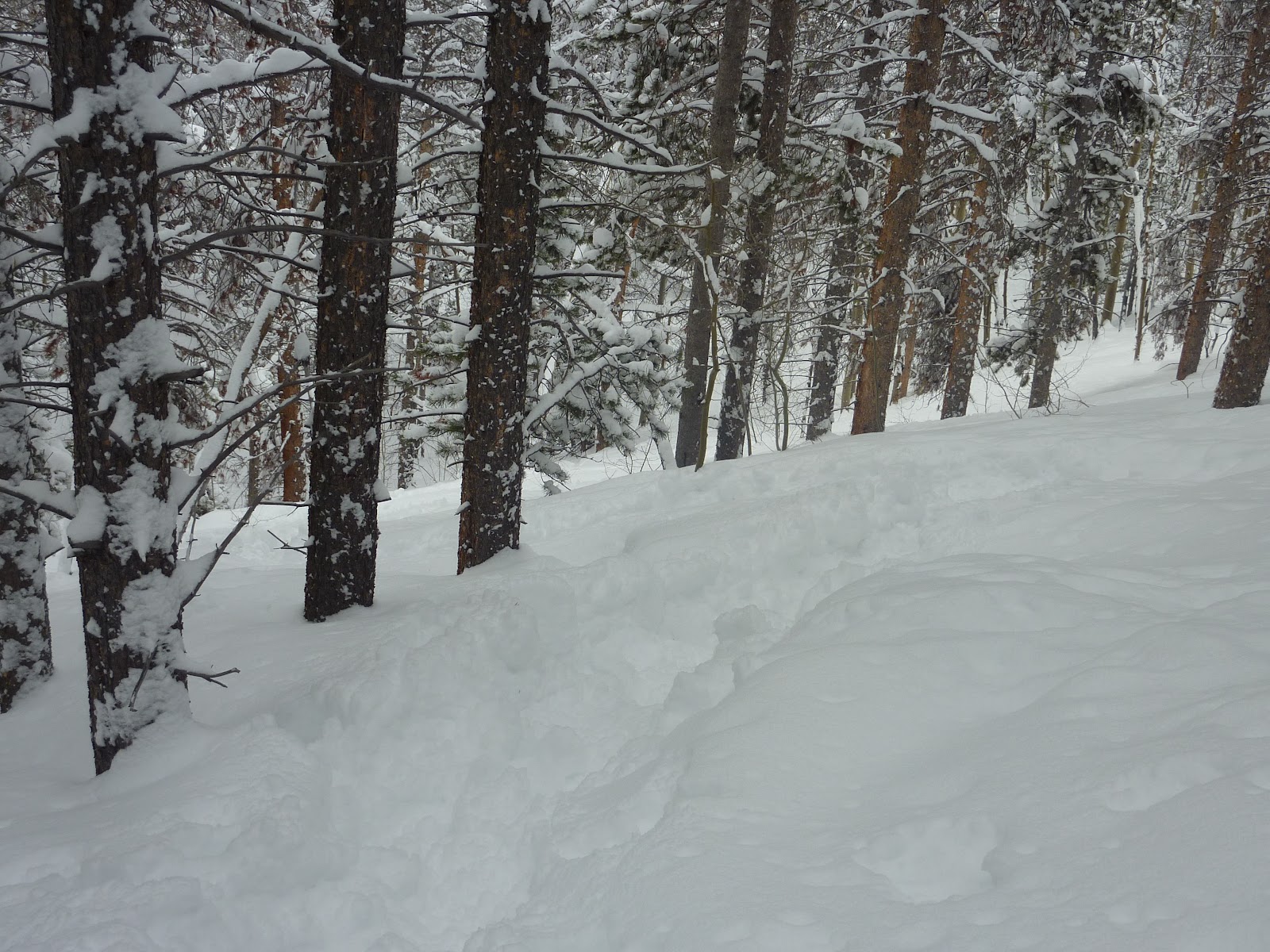 On the high parts of mountains it is also common for the snow to be so windblown that it has either become very hard and walkable on the surface or it will have blown away completely.  When this happens snowshoes can be stashed and we'll continue a hike without them to a summit.  On hardened snow like this the next concern becomes traction. 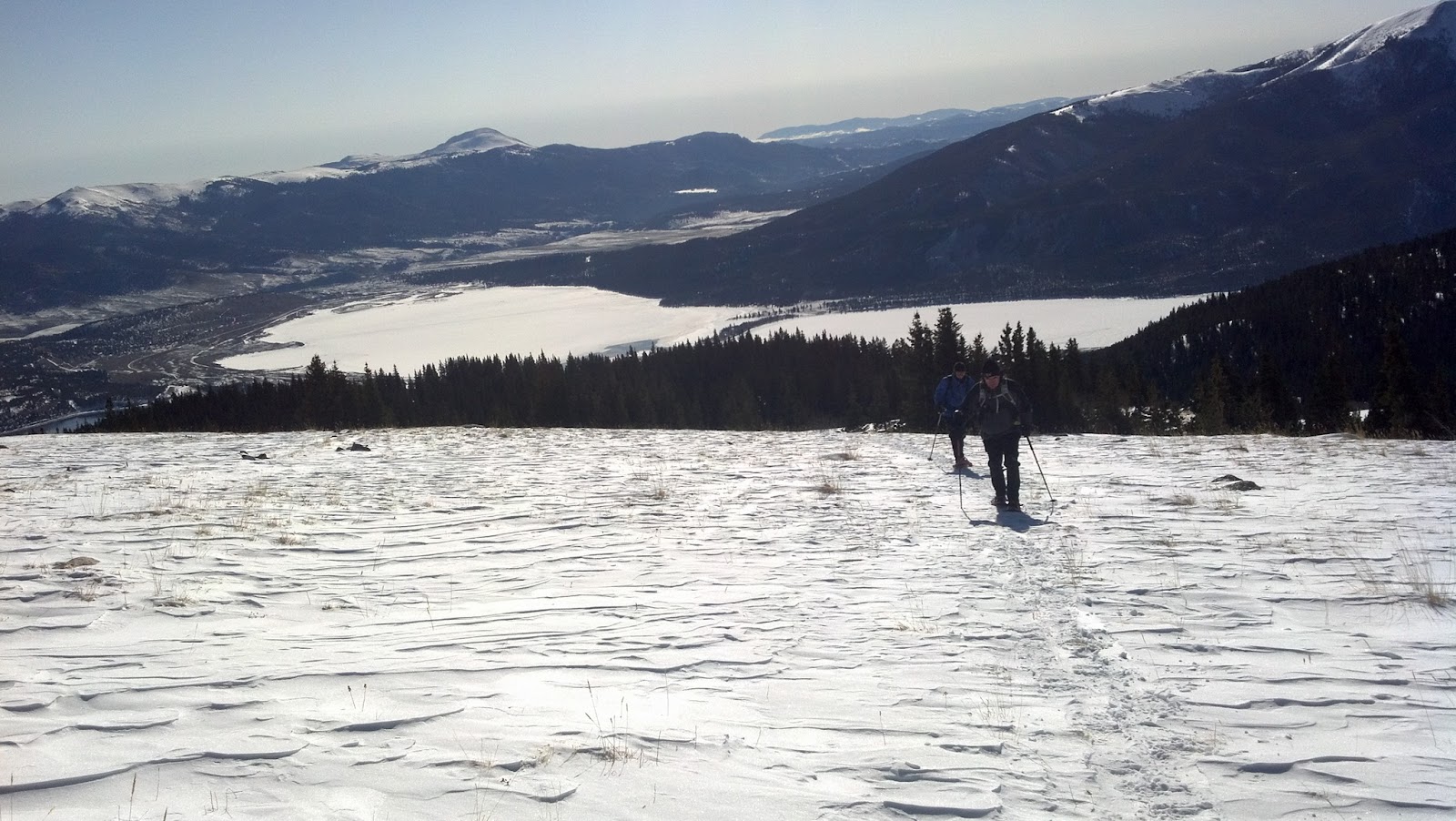 Some people will have heard before of a type of gear called crampons.  These are metal spikes that a mountaineer clips onto the bottoms of their boots to give them a way to cut into hard snow or even ice.  Crampons are even used to climb icefalls.  We use them when traversing and hiking onto steep snow fields where the snow is hard and the possibility of a serious fall is present.  When traction is simply needed for hiking along level or slightly sloped hard snow or ice we use a simpler type of gear called microspikes.  You could picture these are tire chains for your boots.  Their spikes are not nearly as aggressive as crampons and they are easier to hike in.  The picture to the right above shows a snow field with hardened snow that we hiked through.  The slope angle is very modest though and so we ended up using no traction devices at all.


This one perhaps may seem obvious.  Hiking in the winter takes this as a given.  Though surprisingly some of our winter hikes have ended with us having nearly stripped down to short-sleeves because the air temp was above freezing and we had worked so hard.  Nevertheless, temps on the mountains can easily dip to zero degrees and below especially when a wind is blowing.  Hikers in the Himalaya have to be ready to deal with temps 30 degrees below and sometimes worse.

The name of the game when dealing with the cold is layering.  We typically start with a system that has a base layer, thermal layer, and then wind layer.  An extra layer or two like a t-shirt could also be slipped in between.  This allows us to add or subtract clothing as our body needs and activity change.   Gloves are also an essential in the mountains and we typically use a glove liner plus an over glove or mitten to insure warm fingers.  It is also a good idea to have a spare in your backpack.  I've read horror stories of hikers in the mountains dropping a glove on a steep slope, losing it, and returning home with near frostbitten fingers. 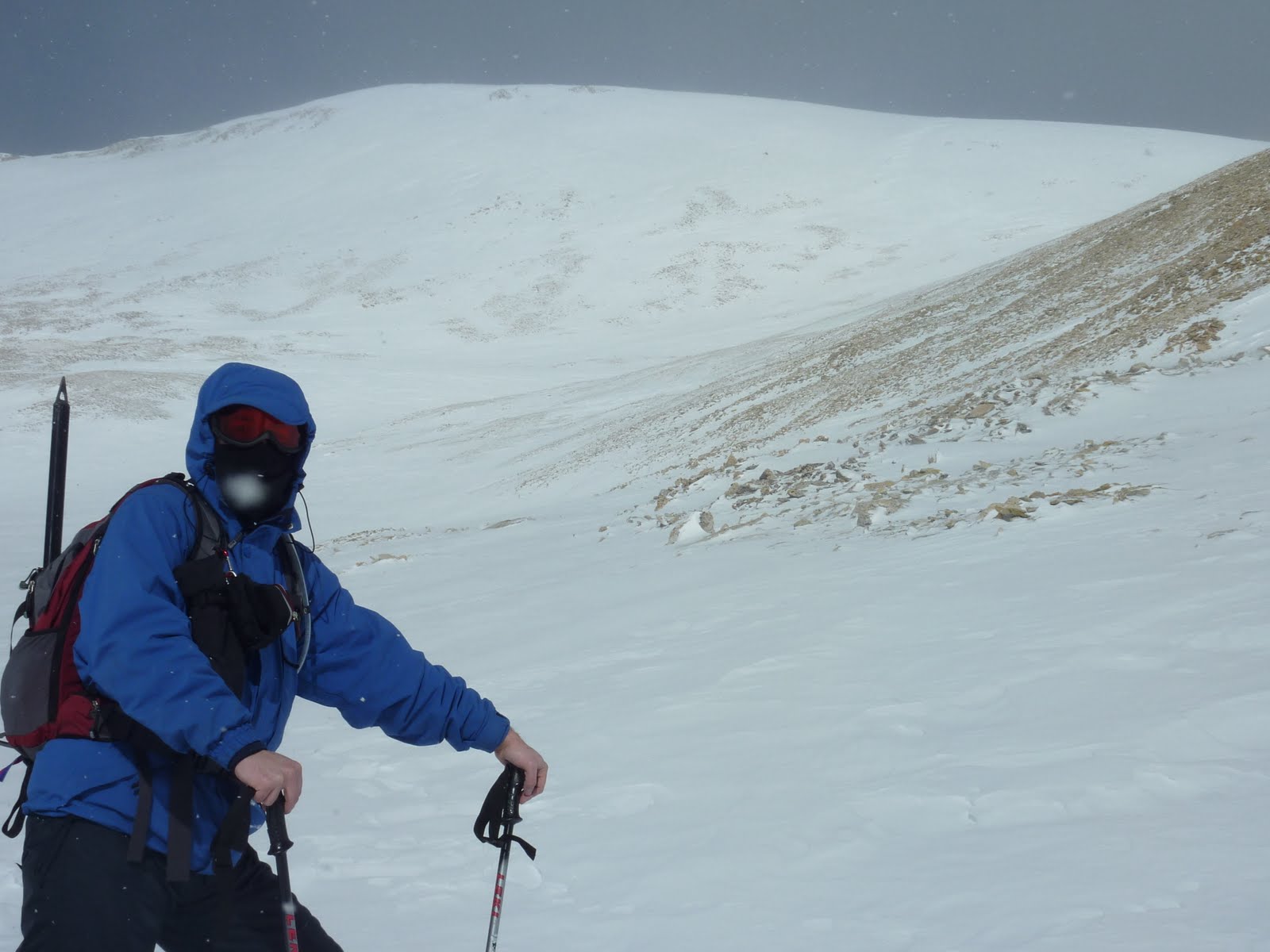 The wind blows pretty hard on most mountains throughout the winter (summer too for that matter).  As you know even back home when wind is added to cold is just gets nasty.  When the wind is blowing our best bet has been to keep moving and keep warm.  To protect our face during windy times we wear a piece of clothing called a balaclava.  It covers mouth, nose and cheeks as well as the forehead.  There is an opening under the nose to allow for better breathing and the fabric over the mouth is more breathable as well.  We wear snow goggles over the eyes to protect from the extra light reflecting off the snow as well as from blowing snow.  We've seen winds get strong enough that they could literally knock a person over.  When they get this bad it is usually just time to go home. 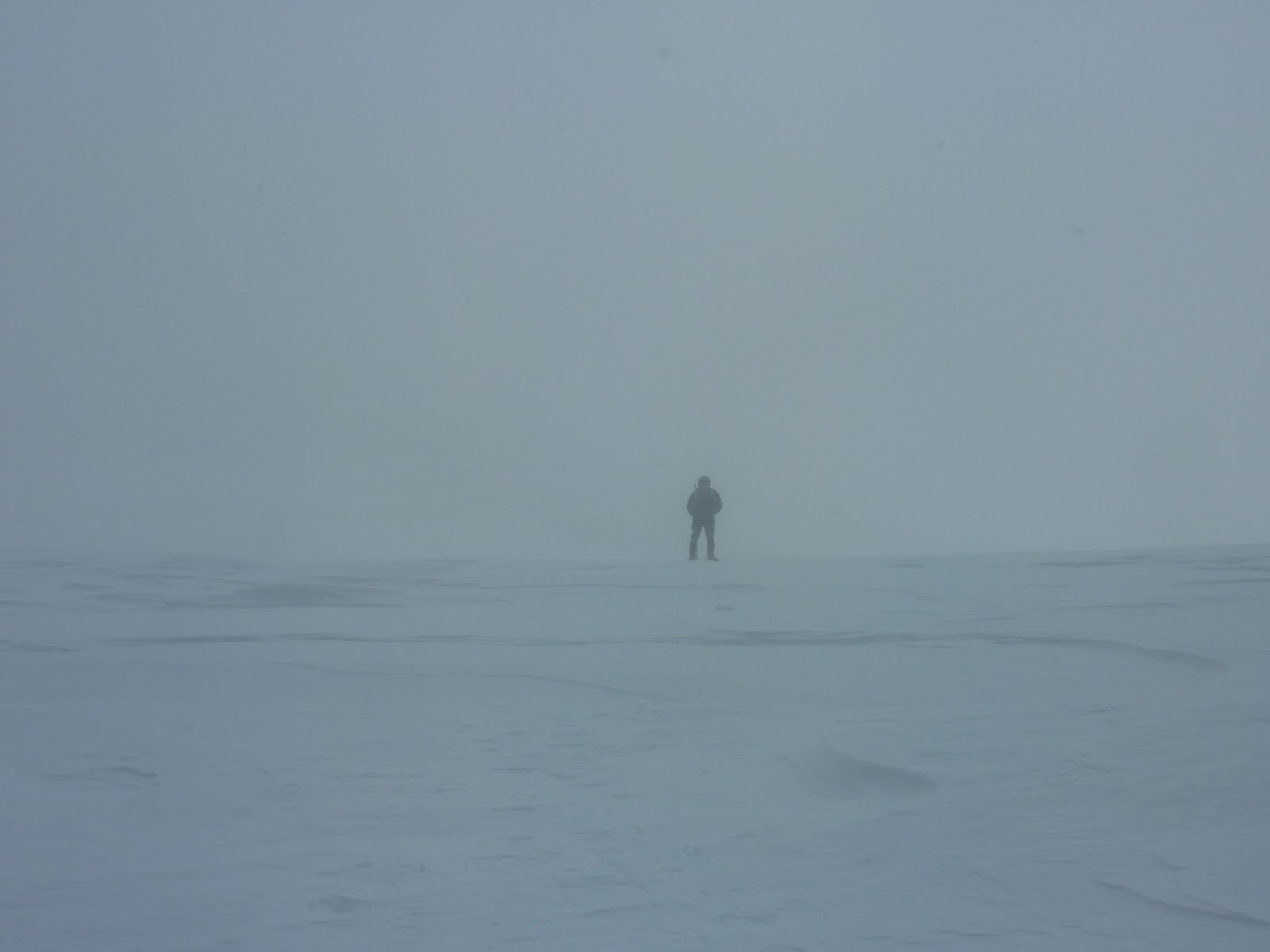 Strong wind can also create another problem for the hiker and that is something called a "white-out".  Blowing snow and a clouded sky can create a condition where visibility becomes near zero and it is easy for a hiker to become disoriented with everything looking the same.  My photo on the left shows a little bit of what this looks like.  We've never dealt with this severely in the winter, though ironically, have actually dealt with this twice in the summer.  For different reasons of course, in the summer it is usually a dense fog that sets in that becomes the culptrit of bad visibility. 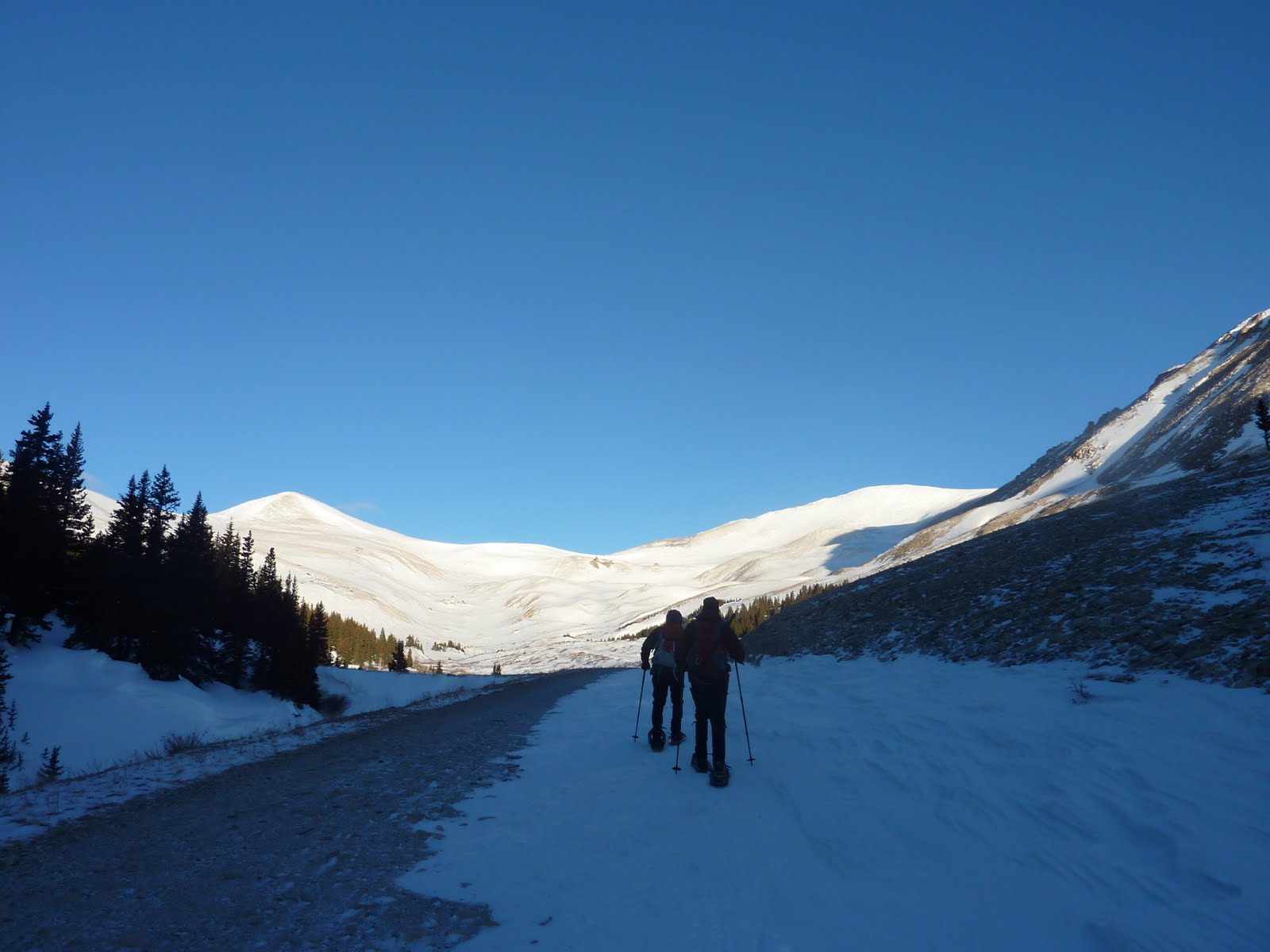 The question of access is an interesting one that the winter months brings up.  Some mountains which are considered simple in the summer can become quite a challenge in winter.  This happens because the roads accessing trailheads will get closed as the winter snow piles up and this means much longer hikes to simply gain access to a trailhead.  When we hiked Mt. Sherman several years back we had to add a couple of miles in each direction to our basic hike because of this issue.  For other peaks it could mean 10+ miles or more to be added in each direction just to access a trailhead.  This helps to limit the number of winter hikes that an individual has reasonable access to.  Of course, to the crazier hiker this just means its time to look for a 4-season tent and to learn how to stay warm overnight out in the freezing cold. 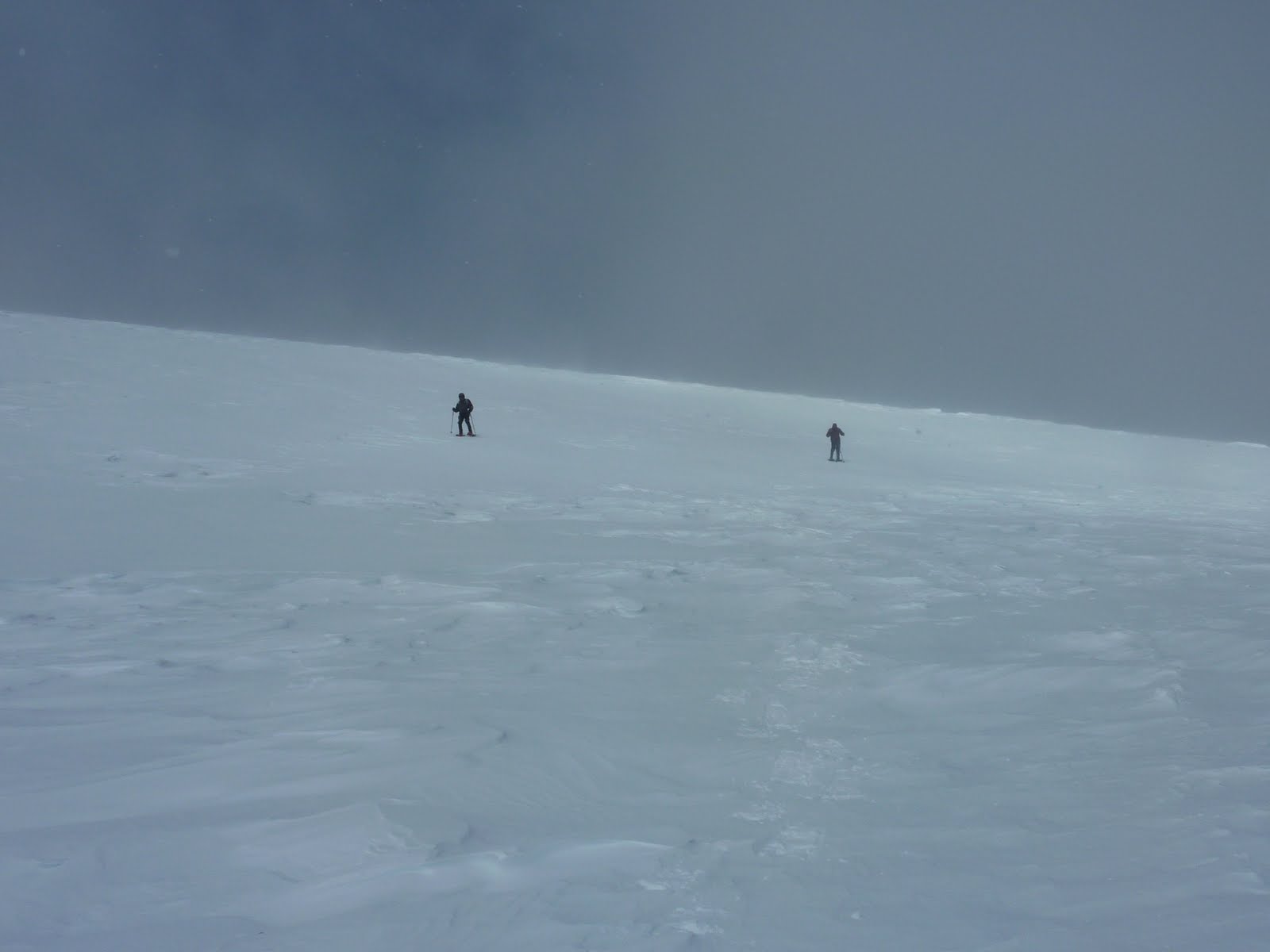 I really should have put this first.  But awareness of avalanche danger is likely the single greatest thing we consider when preparing for a winter mountain ascent.  As simple flat-landers who only enjoy the winter mountain snow once-a-year at best, we handle this danger predominantly by simply avoiding it.  We have thus far picked mountains and routes that as much as possible avoid the avalanche dangers.  This is done by avoiding slopes where the angle is between roughly 30 and 50 degrees.  On this kind of slope large slabs of snow form and bond and when triggered will slide in potentially catastrophic avalanches.  We have worked to pick routes that are less steep than in that danger zone which is one way to avert this danger.  We also pick routes that follow ridge lines.  On the crest of a ridge the snow is usually wind-blown and is also much less likely to form the large slabs that make the worst avalanches.  Quandary Peak, which was our first winter ascent, has a classic and long ridge which made for a safer hike for us.  The most experienced mountaineers are also able to dig a pit in steeper snow and investigate the snow layers themselves to make a determination if a slide is likely.  We've not the experience for this which forces us to limit our choices of mountain and route to preserve maximum safety for us.

I hope this helps bring you into our world.  It does take a lot of work and preparation to ensure safety which is always our biggest goal.  But with the willingness to make the effort, not to mention good physical training, the mountains are accessible even to the average flat-lander to enjoy all that precious snow.