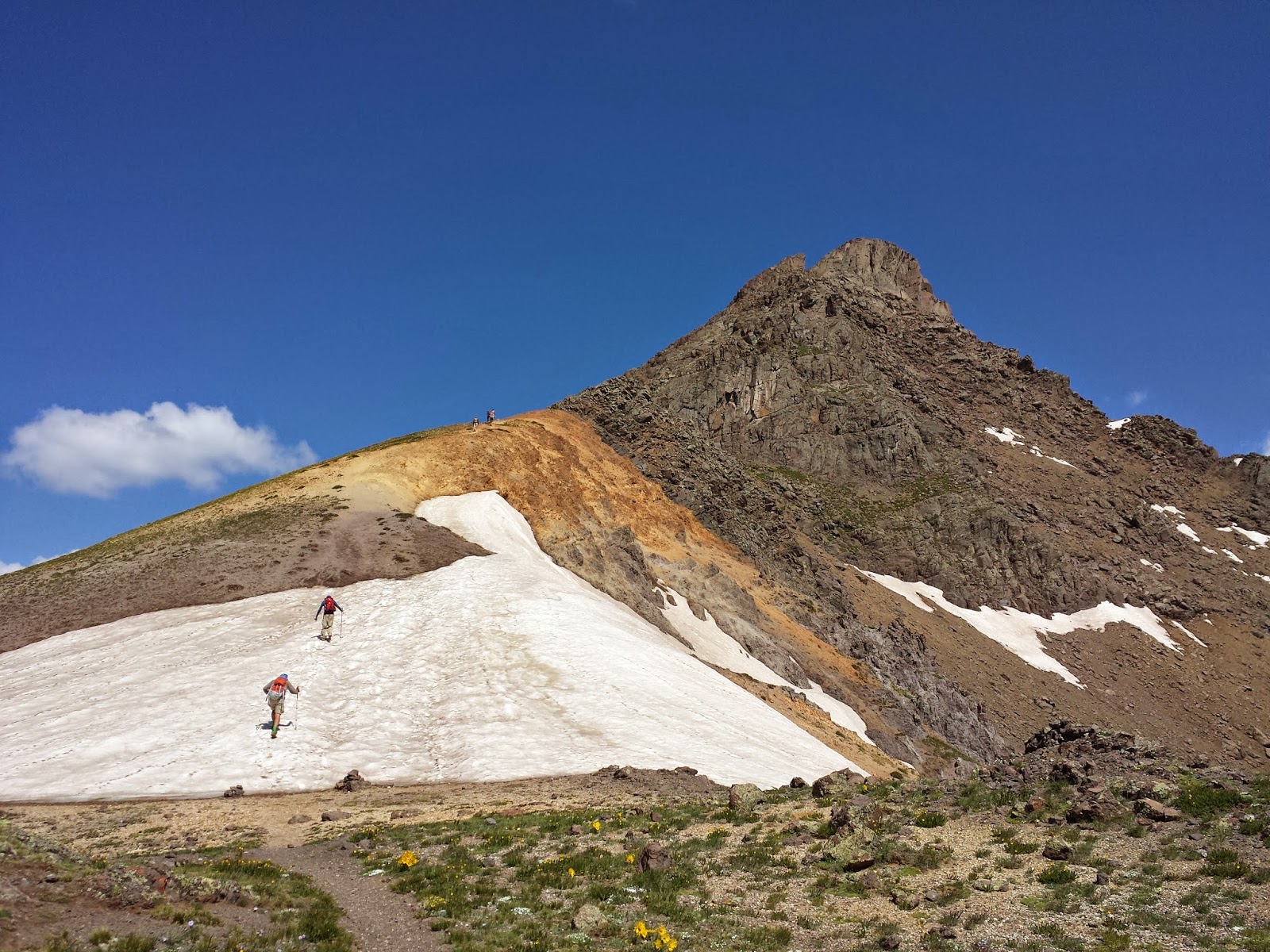 Today's hike almost didn't happen.  If you read my Snowmass trip report you'll see that we didn't make the Snowmass trailhead until 8:30pm last night.  We then had to drive from that trailhead through Snowmass Village, and beyond.  Our original plans had us heading for the Wetterhorn trailhead to camp there, but it would be over a 3 1/2 hour drive.  We added to the time crunch by stopping in Aspen to grab a quick supper.  As we drove over Independence Pass we made the wise decision to grab a hotel in Gunnison to ease our pains.  It wasn't until 1am that we arrived there.

Having had a late night we decided we would risk the weather and delay our starting goal to 8am.  This gave us enough time to grab a quick breakfast at the Econo Lodge (which had sausage, waffles, and eggs by the way) and then make the 2 hour drive to Wetterhorn.  Lake City was a wonderful little town and the dirt road, that is County 20,  heading west wasn't bad either.  The last two miles of the drive when County 24 breaks off got more rough.  A sign at its beginning says that 4WD is recommended but we were able to make it in our mid-size rental SUV.  There were some big rocks and some steepness in the road but it was manageable.

The 4WD road up Matterhorn Creek is well signed and this became our "2WD" trailhead.  We made quick work of the 7/10 of a mile up to the 4WD trailhead.  There are the typical set of 3 sign boards there which help to explain Wetterhorn Peak as well as LNT principles.  Past this trailhead it will quickly become evident why this trail is a special one.  The views will quickly improve and the surrounding landscape opens up into a beautiful green valley.  We were curious as we hiked why many of the hillsides were nearly tree-free and instead covered with green grass and spreads of wildflowers.

At 1.3 miles in (from the 2WD TH) we hit the first trail junction.  Heading left, and what would appear to be the closest way to Wetterhorn, is the Matterhorn cutoff trail.  You  However, the Wetterhorn trail goes right.  Several people have etched Wetterhorn with right arrows into the sign.  The trail here makes a switchback up onto a hillside and then continues to the northwest.  At some points in here you can actually see Wetterhorn's small summit poking above a large plateau.  This plateau is actually the far edge of Wetterhorn's southeastern ridge.  Check it out on a map!

At 1.9 miles in the trail starts winding more due north and then to the northeast to begin to gain the upper basin below Matterhorn and Wetterhorn.  The value of the views increases with the elevation.  At just over 2.5 miles in the next trail junction arrives. To the right is the Ridge Stock Driveway trail which would take you towards Uncompahgre.  To the left is the Wetterhorn trail.


After the junction is a quick stream crossing and then the trail climbs up through a wonderful grassy meadow.  I wanted to preserve the views and so I pulled off trail onto a large rock slab and took the photosphere that I shared below.  It is awesome.

Photosphere as 12,300 in the upper basin below Wetterhorn


Views: In the upper basin below Wetterhorn's Eastern Face by Mark Witte

At 12,400 and just over 3 miles in perhaps the most amazing section of the trail begins.  We were curious if this is part of a re-route that CFI has done recently because it was impressive.  A trail restoration sign was seen to the left closing what was presumably an old trail.  We entered what was a boulder field, though most of the boulders were spaced apart from one another.  In betweenst them all ran the most impressive of trails which wound its way on mostly easy dirt ground through the large rocks.  To add to the delight dozens and dozens of Columbines colored up the grass and spaces between the boulders. 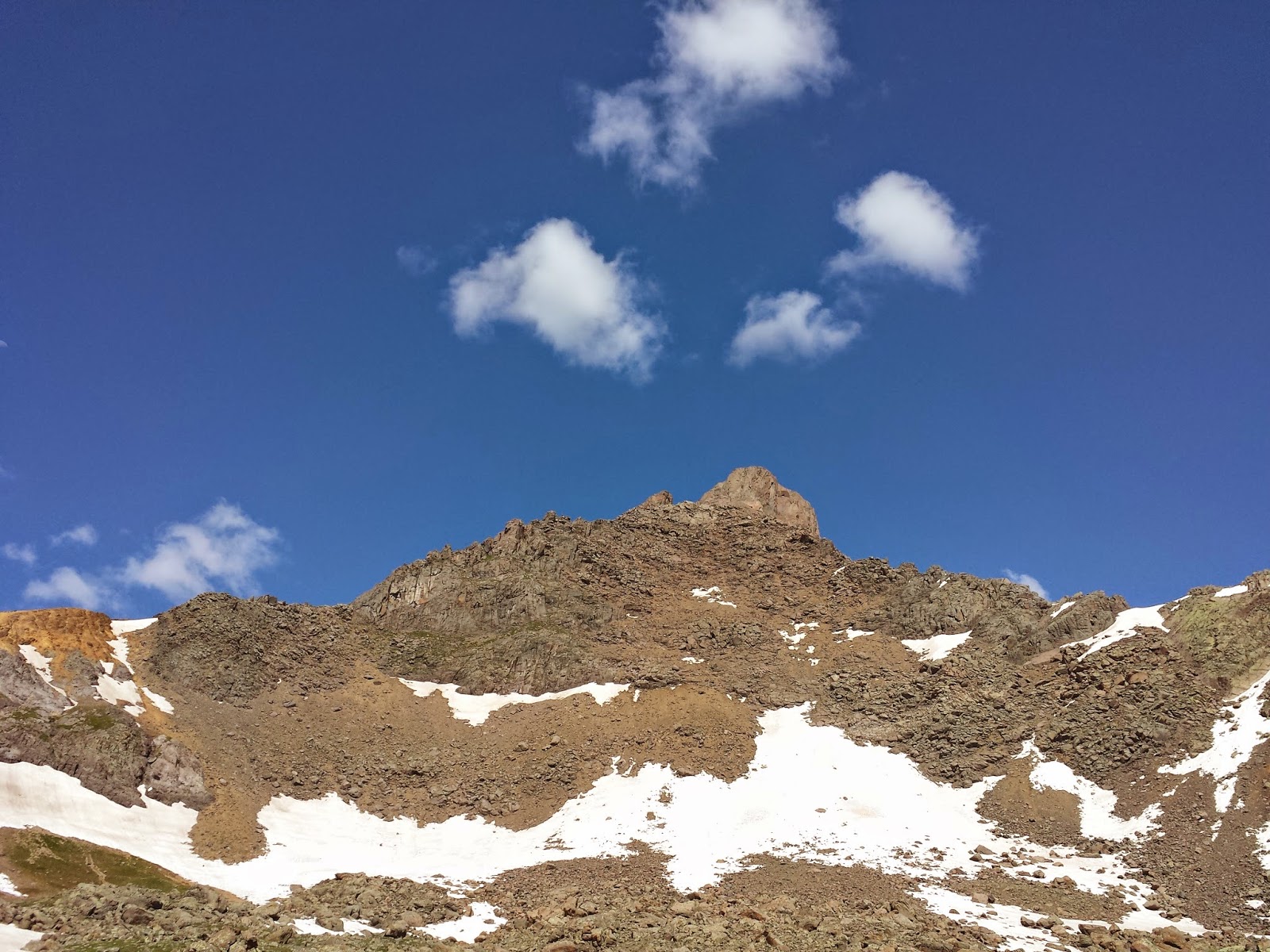 Looking up to the west from here we were treated to ever changing views of Wetterhorn's summit and the jagged ridge over to Matterhorn.  You could also see a large grassy ridge above which the trail would eventually wind its way up to the crest of the ridge.  On the green ridge crest the rocks gradually thin out to a grassy meadow which leads into a switchback that climbs up to Wetterhorn's southeast ridge.

Just before gaining the saddle before the ridge there were (on July 18) two small patches of snow that we crossed.  No traction devices were necessary when we hit them just before 11am.  The saddle that begins the SE ridge was wide open and flat.  It leads into an easy climb that led into one more snow patch that was probably at just short of a 30 degree angle.  We again skipped traction devices and largely because a slip back down the snow would lead to no harm but perhaps a wet bottom.


Above this last bit of snow was a steep dirt slope which led up to the very noticeable yellow-orange dirt saddle on the ridge.  It is this saddle, which is just over 4 miles in, where the more difficult climbing finally begins.  We took a chance here to put on our helmets and to double-check the route one last time.

The initial scrambling above the ridge is likely still considered class 2.  It slowly gets steeper but we still found ourselves moving through it with ease.  The slope directly to climber's left begins to drop off creating more exposure but the terrain you are ascending on is not difficult.  In route descriptions we had read of a rock rib that will block passage on the ridge ascent and we found ourselves before it rather quickly.  We saw hiker's descending the climber's right of two gullies just before the rock rib.  We decided to head up climber's left of the gullies to avoid them and both looked very passable.  This was the first real class 3 climbing yet still not overly difficult.  At the top of these gullies was a well defined notch.  Passing through it and dropping down about 10 feet was a slightly tricky down-climb.  After clearing this obstacle it is worth looking back at it for the descent as we noted two other climbers had already done.


Beyond the notch is more climbing back towards the ridge crest.  We followed some more cairns and found ourselves with some tricky terrain.  I noticed a rocky and somewhat awkward climb right above us that would have gained the ridge crest.  We also saw cairns that moved to our left around some ledges and a rib.  We followed them and this proved to be somewhat difficult.  As it goes, on the descent I would remember this and we ended up finding the awkward climb down through the rocks to be a better way.


After traversing the ledges and this last rib it was an easy climb up a dirt gully to the area below the prow.  This was rather easy terrain to move around the Prow and then up next to it.  We arrived at the notch which gives access to the summit pitch.  It is a 10 foot climb that anywhere else, with exposure, may be considered class 4.  But here it is an enjoyable and somewhat easy hands and feet climb up to a large sloped slab at the base of the summit area.

Here we encountered 10 or so 20-somethings who were making their descent from the summit.  We sat back on the sloped slab to watch them do their work (and to stay out of the potential rockfall area).  Once their group had cleared the summit pitch (minus 1 of them who stayed above) we started our work.  There is a quick walk down a narrow but not difficult ledge to enter the final summit pitch.  It was most everything of what people describe it to be.  Very steep, very exposed, but thankfully, also pretty short.  We found the rock in there to be mostly pretty solid and plenty of ledges to catch your breath.  We picked the routes of least resistance and found it gained some steepness as we headed up.  Nearing the top in the middle of the pitch I encountered a very thin and steep stretch which had me wondering about the down-climb.  I ascended up through it without trouble.  My father and brother then found what I had forgotten.  They traversed climber's left around a ledge and this led into an area of slightly easier terrain to climb up to the summit through.  I completed my line and they climbed this alternate line and we were soon on the summit.  It took us 3 hours 53 minutes to gain the top and we spent a good 30 minutes on top.

What a wonderful summit atop Wetterhorn.  It is mostly flat, spacious for probably 30-40 people and provides unobstructed views in all directions.  To take advantage of this I made another photosphere to preserve the moment:

Photosphere on the summit of Wetterhorn


Views: On the summit of Wetterhorn Peak by Mark Witte

When beginning the descent from Wetterhorn's summit it is very important that you recognize exactly where to start.  I had climbed the steeper more difficult finish and didn't really wish to drop into there again.  I used my brother to follow him into the slightly easier beginning to the descent.  This is worth nothing previously when you gain the summit.  As we worked out way down the summit pitch I found it most comfortable to face in and hang on with all fours.  We noticed others had descended mostly face out.  Whichever works for you.  By facing in I was able to look down between my legs and see the holds as they approached and yet I didn't feel as though I was fighting gravity and exposure so much in my face.


Slowly but steadily we made our way back down to the ramp and were out.  Despite the very real steepness and exposure I found this to be enjoyable.  We worked our way around the prow and once more face the descent down the ridge.  As I mentioned above, I found a place to drop down by scrambling through some rock which put me into the terrain heading towards the V-notch in the rock rib.

Climbing back through the notch and then down the gully on the other side of the rock rib carried some steepness but was typical class 3 terrain.  Behind we could see the weather was starting to give way so we worked steadily to get back to the yellow-orange saddle and off the more challenging terrain.


As we returned to the more regular trail we moved back into hiking mode and began to enjoy the descent.  The weather ended up holding well and we didn't get any showers.  It was actually a delight for us to head down this trail back to the grasses and the winding trail through the boulders.  We spent 10 minutes swapping stories and conversation with a nice couple we met below the boulder fields.  Further down we were passed by a pair of guys who had just done Wetterhorn and Uncompahgre and were cruising down the trail.  Good job guys!  Despite having done 22 miles the previous two days, and adding in another 8+ today we were feeling pretty good on our way out to the 4WD road and the trailheads.  After a mostly uneventful descent we hit the car after a descent of 3 hours.

I have a track and waypoints from the hike all contained in a KML file that you are welcome to download and use (at your own risk): .