This was my second trek to the Pinckney Recreation Area and also second trip on the Potawatomi ("Poto") trail.  I hiked it last November when the temperatures were radically different from what I would encounter on this Labor Day weekend.   This drastic change in temps would heavily weigh into my planning and packing for the trip.  Last November I layered up heavily and had to plan to carry all of my own water.  I was also packing my winter sleeping bag, gloves, and other necessities to stay warm.


For this trip, the overnight low was going to be around 68 degrees which is quite warm for camping.  It allowed me to pack the bare minimum of clothing.  I also came to the realization, one I was quite pleased with in hindsight, that I didn't even need the sleeping bag.  Hoping to save on weight and space I brought a thin bedsheet along just to add some sort of cover for sleep.  If worse came to worse, I also knew I had my rain jacket and I had worn zip-off pants with the leggings.

One of the conclusions I came to on this trip, and one that was likely born out of my last November trip, was the need for an ultralight 1-2 person tent.  I've been hiking with the 4-person REI Half Dome 4 tent which weights almost 8lbs.  Its an awesome tent ... for 4 people ... but a bit overkill for one individual on his own.


As I arrived at Pinckney I was more prepared this time to handle the Rec Passport and camping permits.  It also helped there were actually people here this time.  I got setup for Site #6 at Blind Lake and made my way to the Silver Lake parking lot.  I had forgotten exactly where the Poto hiking trailhead was and at first headed towards the exit trailhead instead.  I finally figured this out and was on my way.  This trailhead starts at the lake end of the upper parking lot.

I was expecting to see far more bikers this time around seeing as it was Labor Day and the weather was warmer.  In my initial hike on Friday afternoon I was guessing I ran into perhaps 2 dozen bikers, but that wasn't nearly as many as I expected.  Its also possible my 3:49pm start had me late enough in the day to not catch as many.  One thing I've always been pleased about in regards to hiking the "Poto" is the bikers are all pretty good about announcing themselves when they pass you.  They also are good about declaring how many other bikers are in their party behind them.  I've always tried to return these courtesies by giving them plenty of room to roll by.  I have noticed in my contemplation about hiking that I would be hesitant to hike with my young kids.  I say this because many bikers do come by at high speeds and often you encounter them at nearly blind corners.  I found myself always intentionally being alert and cautious in these sorts of situations. 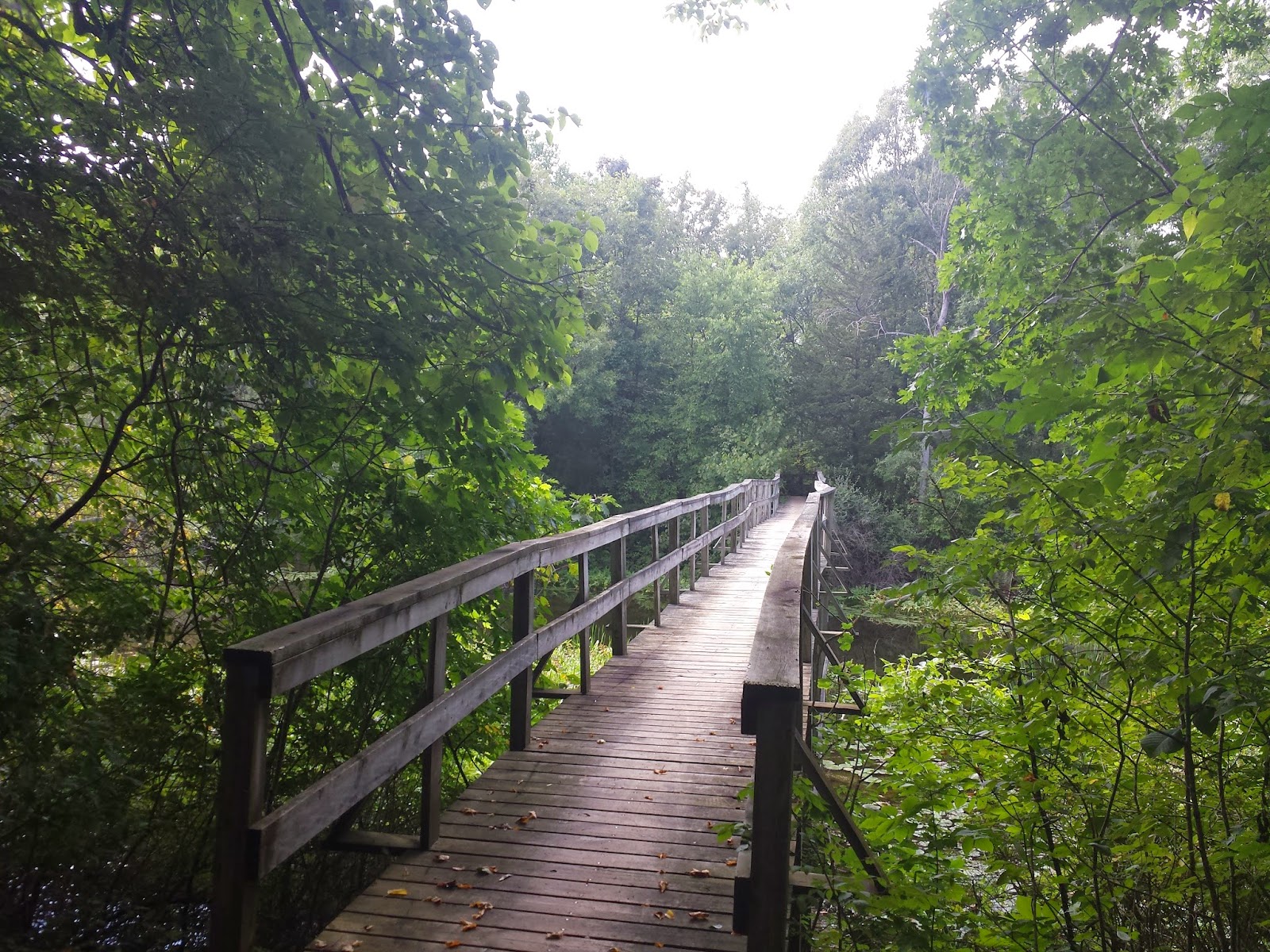 This time around I decided to attempt the "shortcut".  Around 4 miles in from Silver Lake the trail hits an access road.  The regular trail crosses this road and continues north.  The shortcut heads west on the road to Glenbrook Rd, crosses that, and continues further west on the access road following signage to the "Yurt".  About 2/10 of a mile west of Glenbrook Rd. the trail finally breaks northwest from the road.  There was a signpost here but it wasn't all that well marked.  The rest of the shortcut was easy to follow and eventually intersects once more with the Poto  on the western side of the area.


Upon regaining the main trail I was 5 miles in with around 2 more to go to hit Blind Lake.  As a point of comparison, last November when I did the whole northern stretch from Silver Lake to Blind Lake it said I had hiked 10.74 miles.  With the shortcut today it said I did 7.06 miles.  A noticeable difference.


It was just after 6pm when I hit Blind Lake Camp.  It was much as I remembered it from last November only this time I would have some neighbors.  There were folks camping in sites #3 and #4 as well as #9 and #10.  I was in #6.  I spent a few minutes scouting out exactly what constituted site #6 and after consulting the camp map eventually figured it out.  There is a small tent area just beyond the sign board for site 6.  It was a small area but a good and flat area.  The picnic table for 6 was about 10 yards away more near to the lake.

I got camp setup and decided to leave the rain fly off the tent to keep the air moving.  Though the temps were in the mid 70s the entire hike today felt very warm and humid.  In the midst of the trees there was no breeze to speak of so it felt much warmer than it was.  I put all of my gear in the tent which was at least one advantage of having the 4-person tent along.  I event setup an REI camp chair which my brother got me a few months ago.  That was well worth the 1 pound weight of carrying it in.  I setup that chair in the tent and was able to read and enjoy the views.  This happened to be another advantage of the 4-person tent, I actually had space to do this.   The bugs were pretty bad around camp so it was strongly desired to spend time in the tent.

For supper I settled on packing in a Subway sub.  I had debated the cost and weight difference between carrying in a freeze-dried meal and the necessary cooking equipment to boil water, or to just carry a sandwich.  Given the warm temps I decided a cold-cut sandwich would be just fine. Strangely enough, I wasn't able to finish the foot-long sub.  I had this same problem in November when trying to eat a full freeze-dried pouch.  Just not as hungry as I would have suspected. 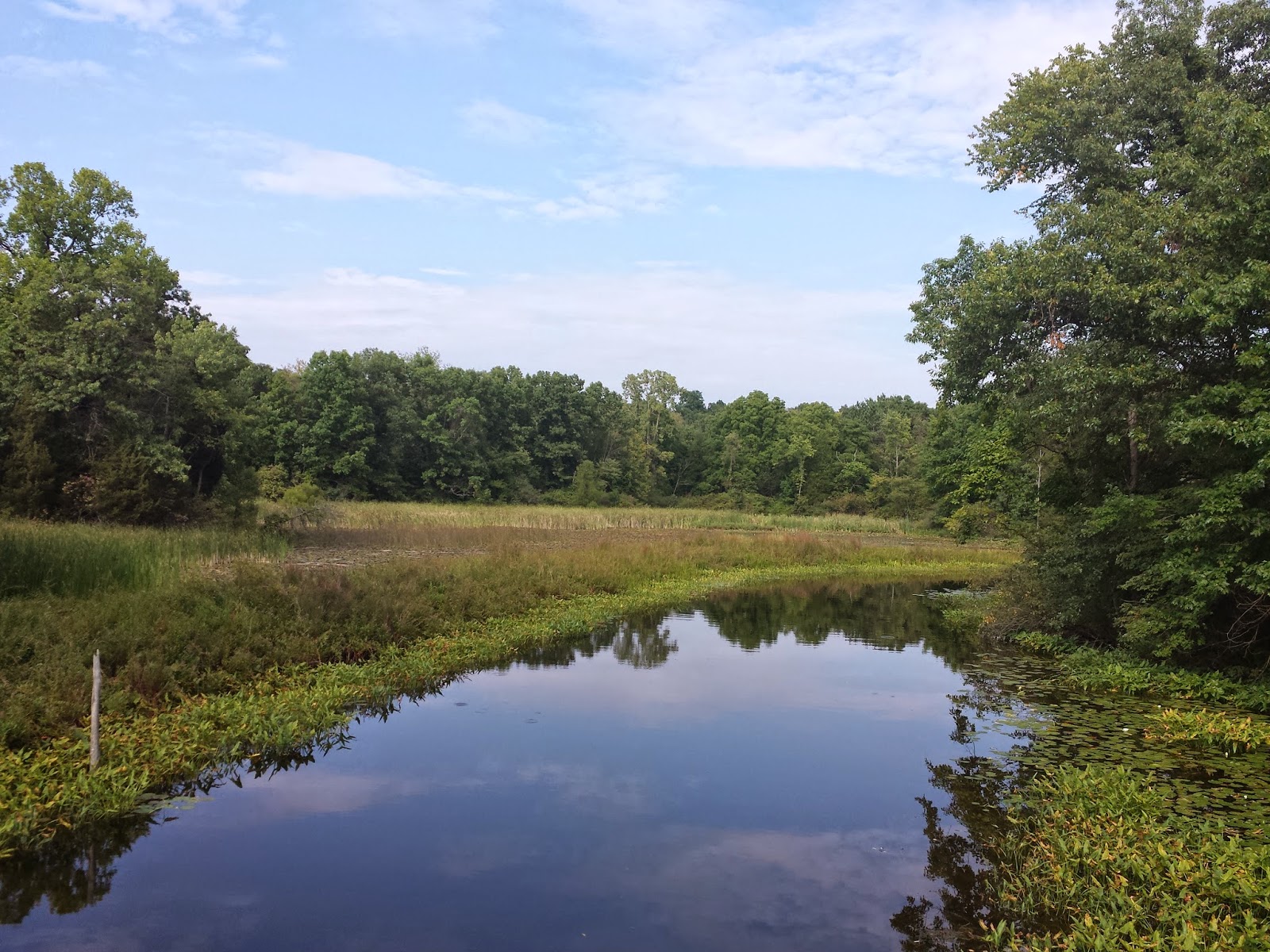 That evening I enjoyed spending the time in the tent reading more and relaxing.  I did put the rainfly on as there was a chance of overnight showers.  As the night went on I was thankful for the sheet as the temps felt just cool enough to want that layer.  Thankfully, no storms ever arrived and I was greeted in the morning with a dry tent.

In the morning I was up just before sunrise to get ready for a run.  I've been eyeing the Trail Marathon here at Pinckney for the last year or so and this was my chance to have a go at the course.  The Marathon runs on Sunday so I'm more interested in the half marathon which is one lap following the same route   I'm hiking.  I got started from my camp at 7am with some GU gels in tow for food.  I started running clockwise around the loop and so I retraced the previous day's route back to Silver Lake.

Through this first section I felt pretty good and it felt like a decent pace.  One extended hill about 2 miles from Silver Lake had me slow down for just a moment.  At the Lake I hit the restrooms and took a break for a few minutes to eat as well.  I was intrigued watching some swimmers out in the lake who were apparently getting a morning workout in. 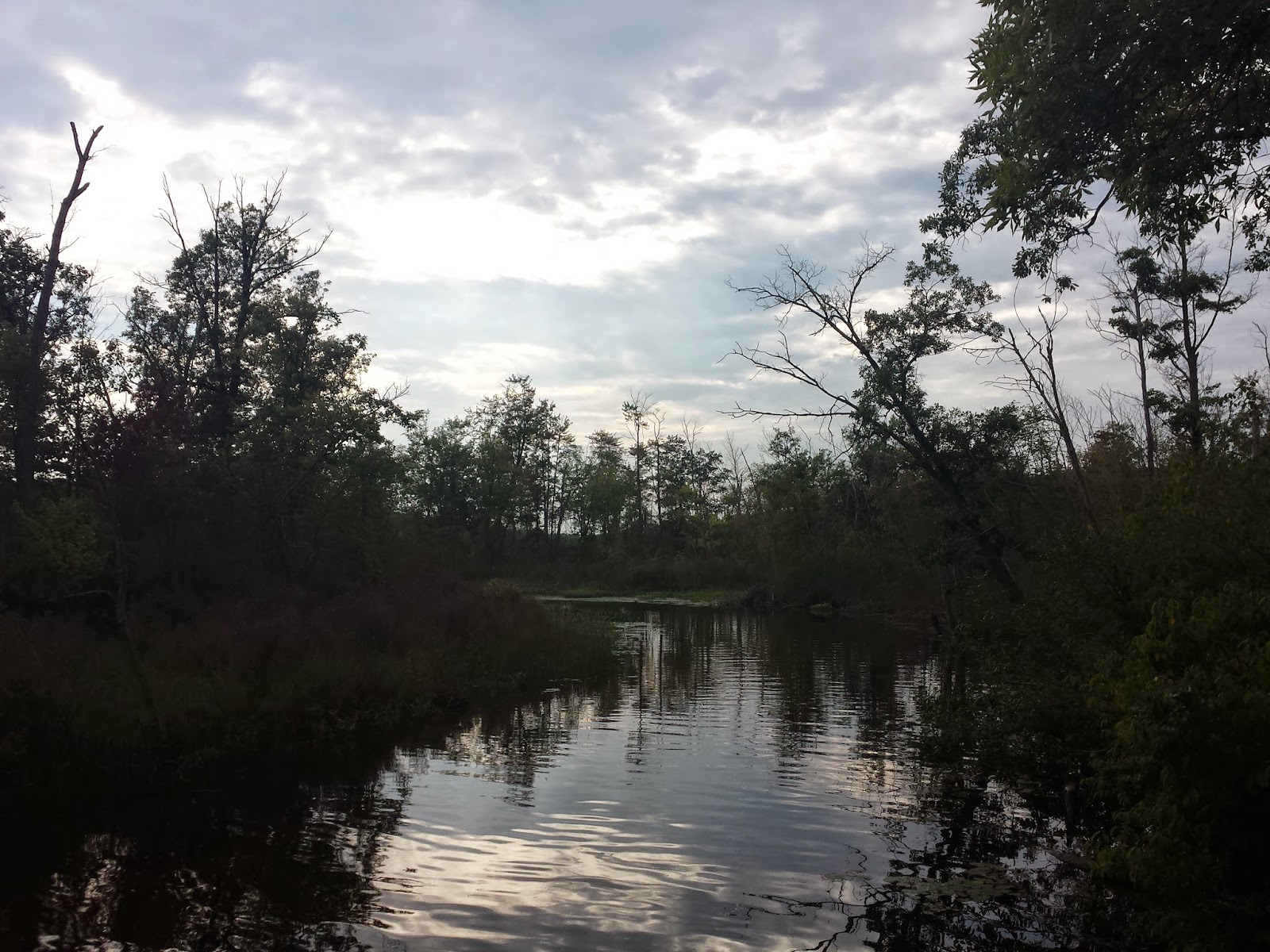 Leaving Silver Lake I did some studying of roughly where the Trail race begins and I'm fairly confident I found it.  It begins with signs for the hike to Losee Lake.  It heads up onto a small ridge in the trees and eventually curves west to hit the main road into Silver Lake.  It follows the road south for just 100-200 feet and then heads west into a parking pull-off.  At the south end of that parking area it gains the main Poto Trail and proceeds onward.

I managed that bit of route-finding and was on the heart of the Poto again now heading back to Blind Lake.  Many hills in this area and as I progressed they started to slow me down.  It was in here I had my first, and thankfully, only tumble of the day as well.  I was sweltering in the humid air through here and that didn't help me either.

I finally made blind lake at almost a minute over two hours.  I was fairly pleased with that timing and left with the feeling I could do much better next time.  I was also a bit wiped today and incredibly sweaty.  It was difficult for me to actually stop my track and use my phone at this point as my  hands, and everything else, were drenched.  It was also a challenge for me to even consider tearing down camp yet as I was dripping.

Instead, I spent my time grabbing water and trying to cool off.  I finally used my bedsheet to dry off as much as possible and eventually this was successful. A few sprinkles from the sky fell in the meantime and I strongly debated making a quick packup of camp.  I knew storms were possible all morning.  It took me nearly an hour to strike camp and pack after finishing the run and thankfully the rains never came. 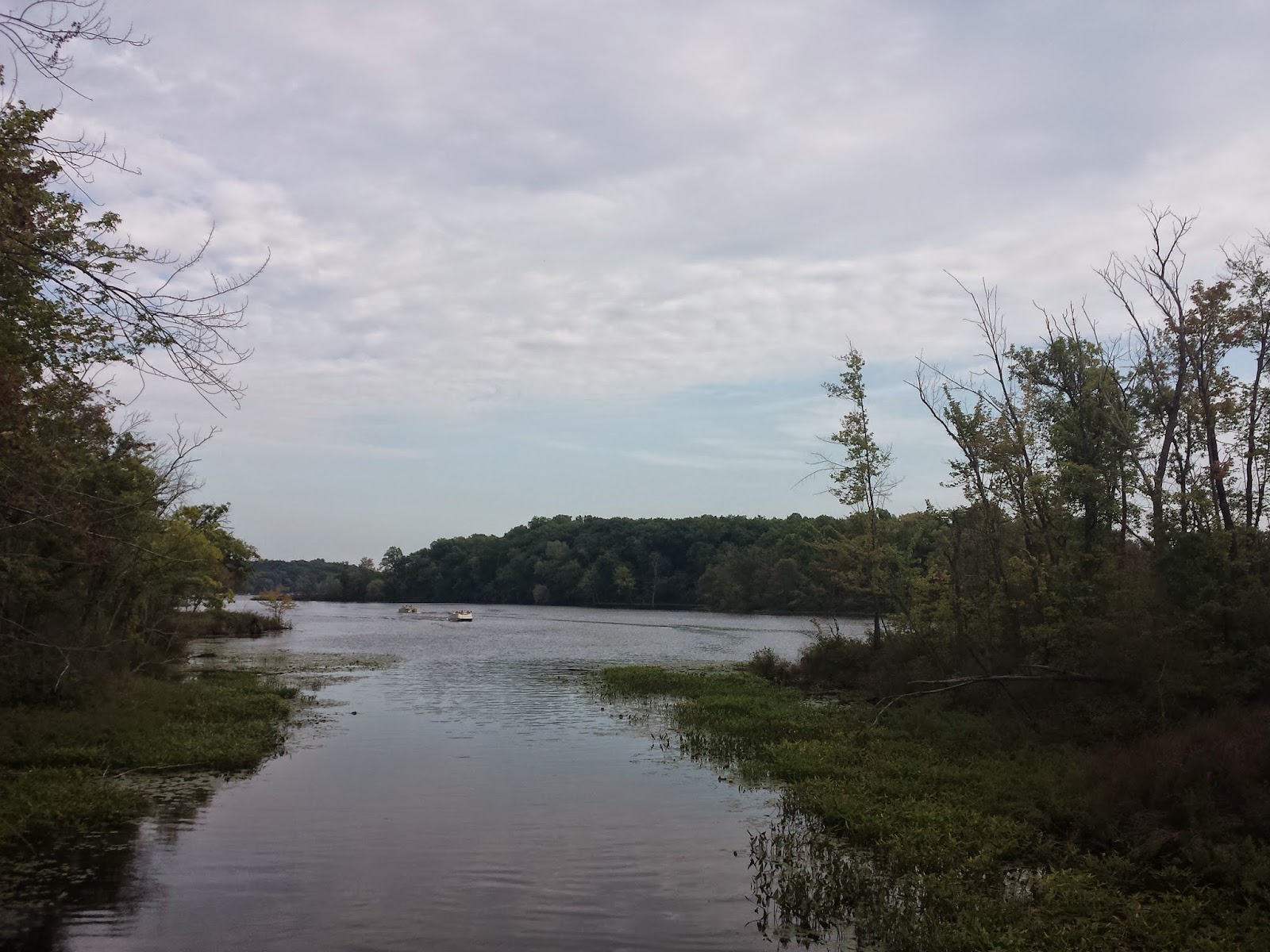 It was 10:25am when I began the hike out.  I filled up a nalgene and pounded my last GU gel to replenish some energy. I followed the same 4 mile "short" route out that I had done in November.  After the morning run I wasn't intested in any further exra credit on the hike out.  I stopped about halfway to eat some trailmix and replenish some energy.  I realize in hindsight that I may have underestimated the toll I put on my body over the last 24 hours and probably didn't eat enough on Saturday morning to compensate.  If counting a 6 mile run I did at home on Friday morning, I logged 30 miles in 24 hours, 19 of which were run, the 11 others with a 35 lb. pack.  I made the car around noon and my legs were wiped and I was yet again drenched from the humid air.

I find myself looking forward to a return with a few more modifications to my plans.  Finding a good ultralight 1-2 person tent is definitely high on the list.  This will lighten the pack and make things more efficient.   I also decided I would take last November's 20 degrees over the humidity of this September effort.   When running, I also need to plan to keep up on the nutrition better.

My hope is to be back here next April for the Half Marathon, if not sooner.

I captured a track of the hikes and run with BackCountry Navigator app on my smartphone.  This KML is available for download.