Tuesday 12/29
David had told us several times before of their family hikes up Pinnacle Mountain which is just northwest of Little Rock. I remember having seen pictures and having been impressed with a mountain, here in the midwest, that was rocky on the top with views. That is precisely the wonder that Pinnacle Mountain offers. Most peaks are still tree-covered to the top leaving minimal, if any, views. Pinnacle with its rocks also adds in the extra fun of scrambling on its more difficult eastern side. 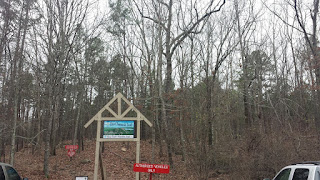 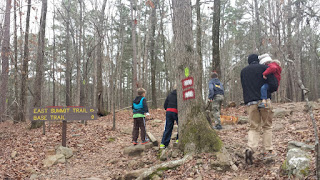 We got the whole family together, except for my sister-in-law Megan and my wife Sarah, and headed up to Pinnacle State Park.  We even had David's 1-year old and his corgi dog along.  We went to the east summit trail parking and were off on the trail at 1:53pm.  A few of the initial sections of trail got steep which provided us a very quick workout.  I ended up carrying my 1-year old nephew in a back carrier so David could help with my 4-year old nephew.  We made nice easy slow-going of this great trail.  One thing I would observe about all of the trail we hit is it was rocky just about the whole time.  This would be a fairly technical trail-running trail. 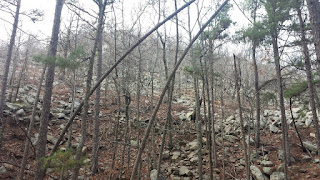 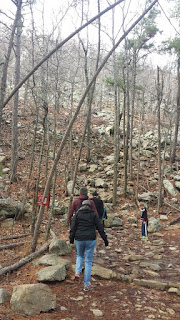 About 0.40 of a mile in after a nice flat area, you'll see a sign and then the trail heads very steeply uphill.  This is where the real difficult scrambling begins.  From this point on to the summit it is relentless large rock to maneuver over.  This section had numerous difficult points for the little corgi dog.  Luke had to help him up and over a few boulders and slabs.  I was also abundantly cautious about keeping myself and the bag carrier with my nephew in it level and in a safe place. 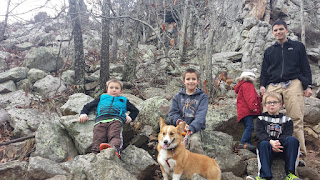 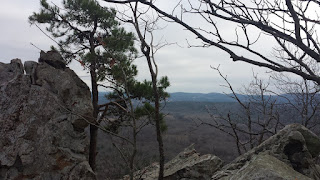 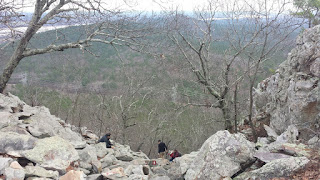 We were passed by a few groups in this area and below.  David had mentioned this was a popular trail and he wasn't kidding.  Even for a Tuesday in December we probably saw over 30 people today.  After some very slow going and copious amounts of class 2, maybe 2+, scrambling, we made the summit in 58 minutes.  Mom pulled out snacks for our group of 5 kids and I shed some layers as I was sweating pretty good. 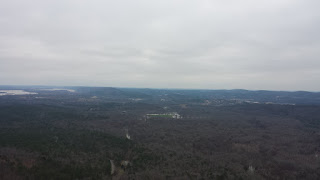 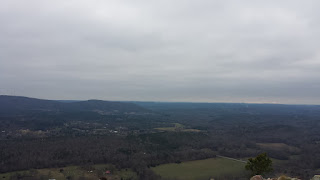 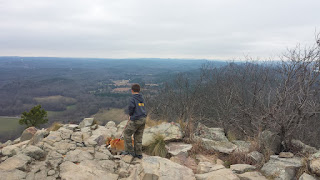 While on top, Luke, Jonah, and I headed over to the sub-summit just to the north.  It was perhaps 20 feet lower in elevation and no more than a 0.1 of a mile walk.  Some bonehead had dragged up an old toilet and littered the sub summit with it.  Not cool. We spent a minute over there grabbing some pictures and then headed back to the main summit. 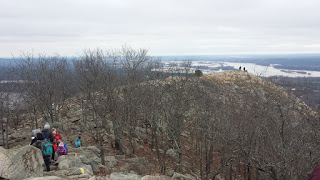 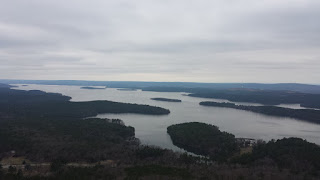 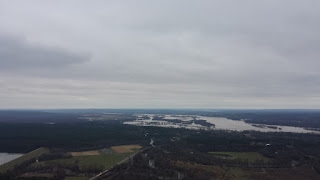 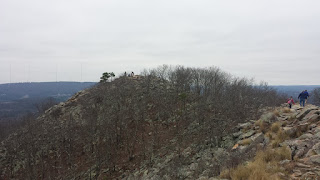 The hike down begins with an impressive staircase made out of large rocks.  It was actually somewhat dangerous as a fall forward would have one crashing their head into rock.  This kept our work slow.  As this steep rock staircase ended the trail split.  To the south was trail built on more rock for sustainability. This was the newer path.  The older path headed north more as a typical dirt trail.  These met up again after about 0.2 of a mile. 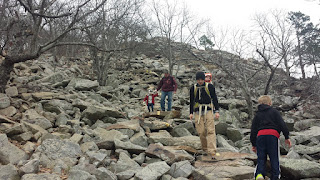 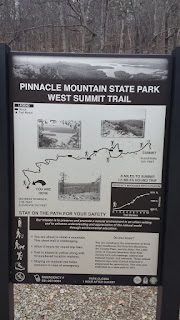 Around this point Dad and I ran into a nice older man and his 20-something son.  They were carrying some full backpacks and Dad got them talking about 14ers after asking what they were doing.  I ended up talking to them the whole way down.  They were training for a rafting expedition into the Grand Canyon. They would spend 8 days on the river and then hike up the Bright Angel trail.  They had also done a few of the easy 14ers in Colorado.  I told them about a number of our exploits finishing the 14ers and about which were the hard ones and all.  We were 50 minutes in the hike down to the west summit trailhead.


As the rest of our group arrived at the trailhead we learned that Mom had taken a spill.  She had rolled her ankle, and then a few steps later tripped and hit part of her face on a rock in the trail.  She had cut her nose and hurt some fingers on the fall. 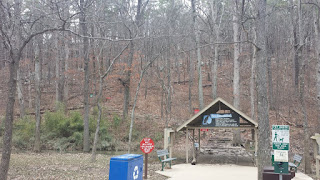 Now that we were at the west trailhead with our vehicles at the east trailhead David and I volunteered to run the 2-mile trail around the base of the mountain. There was trail running the whole circumference of the base we went the west/north side trail.  David had concerns the east/south side may have some flooding.  This trail had some ups and downs and was also pretty rocky.  We kept up a jog pace the whole way and had a blast.  It was fun for me to have someone along for once on a trail-run to chat with and pass the time.  We felt great on the run.  The GPS said we only did 1.45 miles and we did it in 23 minutes.

Wednesday 12/30
Dave and I quickly drove back over the next morning to trail-run the mountain. We started from the east summit trail and jogged up to the difficult section where we then still worked to push the pace. We were up to the top in 17:30. We trotted most of the way down the west summit trail. It didn't go as fast as we had thought forgetting that there is a lot of rock. While we moved quickly we couldn't keep a full running pace the whole time. We did the first traverse in 32 minutes. We had only seen one person who was coming down and 2 more on the summit.We hit the west trailhead and grabbed a quick drink and turned around to head back up. We hit a group of 4 by the trailhead. We jogged the first part of the ascent and then power-hiked most of the rest. On the way up we ran into the couple we had seen on the summit. They asked us "you guys trying to set some kind of record?" We smiled, David replied "nope, just having fun training today." Near the top where the trail heads north for an easier ascent to the summit area David showed me the direct route up the rock ridge. He thought this used to be the trail. It was mostly steep slabs and a workout but more direct and a bit of exposure. We summited in about 15 minutes, only about a minute slower than the west side descent. The east descent was slow going because of the rocky terrain. We also took a minute or two for David to show me where he does some rock climbing setups. It felt great when we got off the steep area and back to the easier terrain where we picked up the trail-running pace again. That was awesome to open up the legs again. We made it back to the car with the second traverse at 34 minutes. 1:06 total for the double traverse and an awesome trail-run.