This hike was one of the more unique hikes we've taken. For starters, it is all on private land which required several hoops to be jumped to make this a reality. When we hiked this in 2005 the Ranch which owns the land required prior registration and payment in order to hike on a given day. I can't recollect exactly what we paid, but it was in the $50-$100 range a person. The morning of the hike we had to show up there early, 6am or so, to meet a man at the gate to get entrance to the ranch. We then signed our life away on some waiver forms and were finally on our way. At least the people we met at the ranch office were quite nice to everyone and at least tried to make it an easy process.
Our other worries were simply making it to the ranch in time that time. It is somewhat remotely located when it comes to the roads and we were staying way off in Alamosa. It was quite a long drive, the last of which were all dirt, to get there in the first place. Once passed the ranch HQ it was a 3.4 mile drive to "Four-way". We ended up stopping here as our vehicle did not have 4WD. The actual end of the road was another mile and some elevation ahead of us. We were fortunate enough to find someone with room in the back of their vehicle to give us a ride to the trailhead. The early morning view was beautiful. Mostly clear blue skies with just a small cloud rolling in over Culebra's ridge.

The early hiking, to our surprise, was actually bushwhacking our way up the drainage to the NW ridge. Luckily there were not that many actual "bushes" to "whack" but there was no real defined trail as we ascended. As we ascended past 12,000 feet our next adventure of the day was just beginning. Thick clouds were coming in right on top of us the more and more we ascended the slope to the ridge. It came to the point where visibility was down to 20-50 feet. We could not see the ridge crest ahead of us nor anything below us. We were fortunate enough to have an idea of where we needed to go and had the power of an old Garmin GPS. We continued the ascent to the ridge.

Our next surprise of the day came as we nearly gained the ridge. We ran into a couple of hikers who were already descending. They were coming at us from the north on the ridge and said they had already summited and were on their way down. Now I knew roughly what the terrain looked like and I know the summit was not to our north along the ridge at that point. We're pretty sure they got lost and thought they had topped out, but by no means did they top out on Culebra. We think at best they had hit Point 13,400 which is at the northern end of the horseshoe-shaped bowl to the west of Culebra.

Gaining the ridge for us was exciting as it made navigation much easier in the white-out. It also meant we'd knocked out more than half the elevation. Along the ridge there are several massive cairns which help you know you're sorta in the right spot. As we moved along the ridge some clearings in the thick white-out were beginning to open. This was good news for us as it meant we might actually get visibility when we neared the summit. This photo here shows our very first look at Culebra's summit:

From where that photo was taken and beyond the trail begins to curl south, then southeast, and finally east around a bowl and this then gets you to the summit ridge. As we traverse on the ridge around the bowl we started to get more and more great views of the surrounding area: 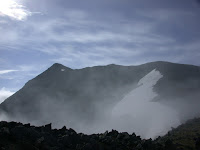 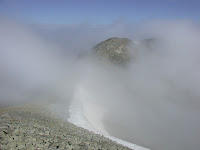 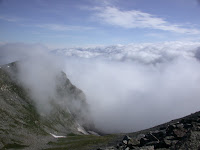 Past the bowl the summit hike ahead is fairly easy. Actually as a whole this hike barely strayed above class 1. The greatest challenge was the white-out conditions and the necessity to know where you are and where you are going. This photo gives an idea of what the final climb towards the summit looks like:
Near the summit you do finally get small bits of rock scrambling, but its barely class 2. A small grass meadow awaits you just before the final summit push and some beautiful views of the southern Sangres. This was a special summit for us as it was the #54 finisher for our good friend Jim Laatsch. Pictured here showing off "5" and "4":
We had done the Blanca group with him the year prior and also did Elbert two days prior to this hike. He had amazing stories to tell us about several of the peaks such as the Crestones and Wilsons that still await us. We did some celebrating up top and the clouds allowed us a few good pictures and thankfully: no rain. The hike down was mostly uneventful. We at least could see everything we were doing without the white-out on the descent.

I did not have the original track from this hike so I have embedded one from a more recent hike:

To see all of my photos from this great hike click the photo below and it will link you to my Google Photo Album: 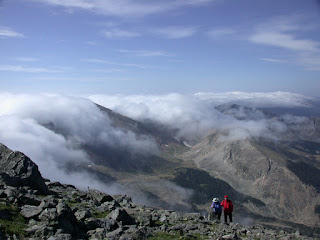