We left the condo around 5:30am this morning to head for Handies. We made the drive up to Silverton and then found CO-110 heading northeast out of Silverton (also County Road 2). This road travels for about 7 or 8 miles out of town on a mostly flat dirt road. You'll then hit what seems to be an RV park where the road starts heading uphill and gets much rougher though still passable for 2WD. After a few more miles of bumpy driving you hit the ghost town of Animas Forks. From here the 4WD road heads east and you have a choice between Engineer Pass or Cinnamon Pass. We went up and over Cinnamon Pass which turns out to be a beautiful drive. The 4WD isn't bad and the road is mostly straight with not too many switchbacks. At the summit of Cinnamon Pass you're up in a green meadow area with ridges of peaks to the north and south. The trailhead for Handies in American Basin was only about another mile from Cinnamon Pass.

We left the trailhead for Handies at 7:45am. We had gone to the extent of the 4WD road in American Basin (as did several others) which cuts about 1/2 mile off your trip heading in. The climbing was very good and the route easy to follow as you headed up into American Basin. As you get about a half mile into the basin you start to veer left (southeast) into the upper parts of the basin. The trail will take you to the bottom of a green slope on which you climb several steep switchbacks which will take you to just below Sloan Lake. From here you traverse along a rocky trail east across the back end of the basin to a few longer switchbacks which take you up to the saddle at the southeast end of American Basin. Once on the saddle you're at roughly 13,500 feet elevation. From there it was a steep climb up the summit ridge to Handies. There is really no exposure along any part of this trail and the path is well-defined the entire way. We summited at 10:15am, only 2 1/2 hours from the trailhead. There were 3 or 4 other groups at the summit some of which had come up the Grizzly Gulch trail. The view was hazy but we were able to pick out most of the other San Juan 14ers.

We spent a good half hour on the summit talking to the other hikers. We found out much of our group up there were schoolteachers. We headed down from the summit at 10:45am and made a quick hike back to our jeep getting there at 12:15pm. The legs still felt good when we hit the bottom and the altitude didn't even get us today. After having spent last night in Ogalalla, Nebraska at relatively low elevation we were calling Handies our acclimation hike for the trip.

Once in the jeep we spent the next 2 hours plus once more driving Cinnamon Pass and heading out to Animas Forks and Silverton. We spent a little bit of time at the ghost town on our way out. The road at this point in the early afternoon was littered with ATV's and tourists making their runs on the rentals into the mountains and the ghost town.

I did not have a GPX track of my own from this hike. I have taken a generic KML of the Handies trail and embedded it into Google Maps so you can get an idea of where the trail takes you and what the Handies Peak area looks like:

To see all of my photos from this hike click the photo below and it will link you to my Google Photos Album: 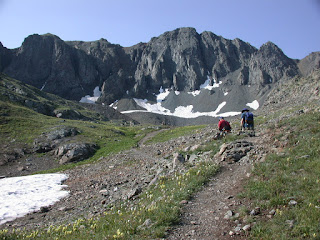