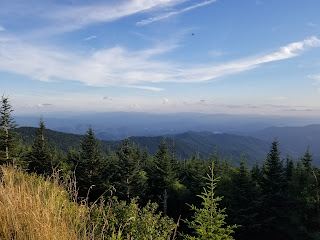 
Trip Report:
All throughout our week at Pigeon Forge and Great Smoky Mountains National Park I had contemplated a fun way to do a family activity with Clingmans Dome. I also wanted to make sure we had the chance to hike it. The obvious solution kept pointing out a group hiking it from Newfound Gap with the remainder driving the road to the top. The main question was merely who would join the hike and when to go. The plans ended up getting pushed to our last day. Our group of 8 for the hike made it to Newfound Gap just after 2:30pm and we parked and made ready to go. We carried the basics of food and water but not much else. The weather was looking pretty good for our afternoon. Though temps were around 90 down in Gatlinburg, it was just over 70 up at 5,000 feet. We made our way on to the Appalachian Trail crossing the highway at the gap.
We had hoped with this route being up so high for some good views in places but this would not turn out to be the case. In fact, before reaching Clingmans Dome I would say we only hit 2 or 3 spots with some kind of views and even they were still a bit obstructed.
The first mile plus of the route is a fairly gentle climb up to Pt 5,530. We would find the AT in this section to be very well maintained but still technical with rocks and roots. From that first Point the trail drops to the parking for Indian Gap Road. This would be the only spot where the trail fully pops out to the road. It gets close in several other spots but never fully comes out.
Another 450ft climb is ahead up to Pt 5,738. Early on the kids were all full of energy and leading the pack along the trail. The younger ones ranged in age from 8 up to 17. We made sure to keep them all entertained and fed with calories and sugar. After that point is a fairly modest downward section that bottoms out near the Spruce Fir Nature TH but you never actually come out to the road without doing a bushwhack.
From here another 600 foot climb commences up to Mt. Collins. As you near the top you bump into a big well marked trail junction for the Sugarland Mountain Trail. We learned that the Mt Collins Shelter is actually a half mile or so down that direction and not actually on the AT. Atop Collins we had a brief view out to the east. Coming down from Collins might be the biggest bummer of the route as you drop considerably. After having gained over 1500 up to this point you give almost 600 of it back. We were surprised to see that the descent total for this was 1,540 feet which wasn't a far cry from the 2,800 feet total ascent. The altimeter showed just under 5700 when we bottomed by Collins Gap. My brother and I did a short 20 ft bushwhack here to briefly pop out onto the road at the gap. My brother got some nice pictures out to the southeast. We began the final climb up to Clingmans. It was in here that I learned that some of the in-route entertainment was my son Luke and one of his cousins were slipping small rocks into my pack. I knew they were doing something behind me but was both surprised and impressed to find at least a dozen small rocks had been slipped in. I had never noticed the extra weight but was glad to be at the receiving end of their joke and their fun. All the while on the hike we had tried to get a couple texts out to the driving group to let them know of our progress. From Newfound Gap to Mt Collins we couldn't get anything through. Finally atop Collins I got a text out to update them on status. It seems like after Collins every once in a while we would reconnect and my wife would see us on Google Location Sharing. While they had already left the house with plenty of time to spare these updates allowed them to take extra time at Newfound and not hurry to be near the summit.
As we worked the final switchbacks up to Clingmans I wondered how the AT would get us to the summit tower. I could see one possibly was it would swing us around to the west side before coming in which is sort of what the maps implied. Yet I hoped surely a shortcut would be found more on the northeast side of the tower where the AT seems to reach the top. Sure enough as the tower came in sight we found a clear path leaving the AT right up to the base of the tower. It was perfect. We made our way up to the circular ramp that winds up to the tower and were delighted to get some beautiful views of the smokies. We were also surprised to see large amounts of clouds ascending vertically on the northwest side of the peak obstructing the views back towards Gatlinburg. The hike was fun but we had hoped along the way for a little less "tree tunnel" and a little more open spots. It gave me a renewed appreciation of the hiking we dearly love out in Colorado and the gorgeous wonder of the alpine and the land above treeline.


Track:
I have a track and waypoints from the hike all contained in the embedded Google Map. Check it out and use at your own risk.
Labels: National Park North Carolina Tennessee Trip Report
Location: Clingmans Dome, North Carolina 28713, USA