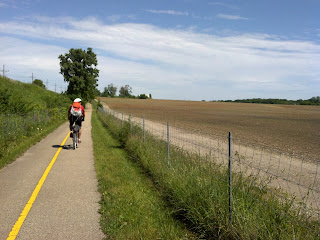 We had a larger group this year riding four up to the border and back. Where we had just Matt, Ken, and I last year we added my Dad, Denny this year (who has done this trip probably more times than the rest of us combined). Denny and I got started from our house in Lombard and headed up to the Great Western where we met Matt and Ken just a few moments after 6am. The Great Western was in great condition this year where we had quite a bit of mushiness and standing water last year. We faced some head wind but made it through this section well.


My biggest concern this year was my left knee. It was sore last year and when I did a 60 mile ride earlier this Spring it came back really sore. I'm finding it must be something with my pedaling motion as the pain only comes while biking and only in that knee. Some sort of patella tendinitis based on my initial research. I was taking Advil regularly this day to keep that knee pain in check and for the most part it worked well for the day. I also dealt with lower back pain last year because of the way my backpack rode hard on the small of my back and my hunching over on the mountain bike. This year I went without the hydration bladder in my pack and just grabbed gatorade bottles from the sides. This worked well and my bike was nearly a non-issue all day. Only major pain and discomfort this year was the norm: the seat. Even with padded bike shorts and the seat cushion it still hurt. 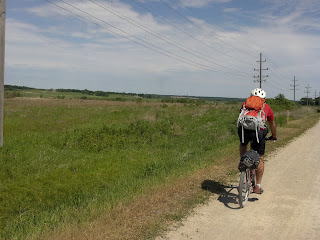 This year's trek was a good one for animals. We saw handfuls of chipmunks and birds along the way. We ran into two small snakes as well, one of them literally got run into. The highlight amongst animals was on the return trip near the Fox River. We saw a doe and a very young fawn. The fawn must not have been more than a few days old. We saw them clear the trail and as we passed by the fawn was just a few yards into the brush. 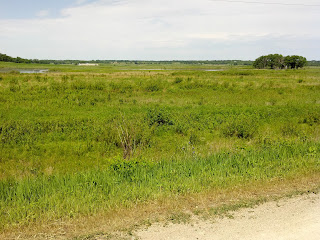 Weather was also perfect for us. Mid 60s when we left home in the morning and did not get up the low 80s all day. Had mostly sun though some clouds rolled in on us up by McHenry on the way home. Storms were threatening in the north but as we moved further south the skies cleared for us. The last 20 miles was clear skies.

Most of the trail was unchanged. Sternes Woods was the same ole challenge as usual. I had the added benefit this year of having had my right gear shift recently replaced which gave me my full complement of gears. This helped in getting through the hills in the woods with no trouble at all. Up by the major intersection near Lake In the Hills we noticed they were building a bypass bridge which would appear to be near completion. This will help the bike traffic avoid that rather large intersection and the congestion. 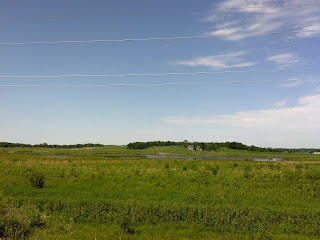 We had a few major stops on the way home this year. We hit the Subway up at Richmond for a 30 minute lunch and also the gas station by the trail just after that for refreshments. We also hit the gas station on the corner in Algonquin for drinks and the Dairy Queen in East Dundee for a snack. We also had some stops for Ken's calf which started cramping up on him on the second half of the return. Thankfully we all made it though and we treated ourselves to a nice big Portillo's supper upon returning home.

Here is a track of our bike ride as taken by my Runkeeper app: