We left at just past o-dark-500 this morning to head for Twin Lakes and the South Mt. Elbert trailhead. We arrived in the morning twilight of about 6am and proceeded to get our gear ready. Another pair of vehicles were in front of us in the parking lot with four guys also getting their gear in place. They were testing out their avalanche beacons which were obviously new to them. We also would later learn they had rented their snowshoes as well. They had the impression there would be plenty of avy terrain on Elbert today, but the recent beta we'd read said otherwise.

It was cold but with the snowcover it was quickly getting light. We set out on the trail at 6:16am and headlamps were not even needed at this point to navigate the 4WD road. We started behind the other group of four but within the first mile had caught up to them. The 4WD road was hard compacted snow in the tracks of a pick-up truck that had gone up this morning. We were surprised to see someone had attempted this with the snow. About a half mile in the truck had finally stopped at a bend in the road. After this point the snow was less compact but still firm enough not to require snowshoes.

I made a rookie mistake in dropping my main snow glove at one of our quick drink breaks. Had glove liners on beneath these and so didn't realize I hadn't put it on til we were a tenth of a mile up the road. Luckily the guys coming up behind had seen it and I came down and met them and got my glove back. There were a handful of junctions we met along the road but double-checking the map on my GPS it wasn't difficult to ensure we stayed on track.

It was 7:30am when we hit the 4WD trailhead. There were 3 sign boards here making it an obvious stop. Proceeding immediately after this TH is the small bridge-crossing noted in route descriptions. We put on the snowshoes here knowing the true ascent was just beginning. The snow cover was also quite a bit deeper the further we headed in, though there was a well-trodden trench still at this point. It was only about quarter-mile hike from the 4WD TH to the trail break to head up to Elbert from the Colorado Trail. The trench actually short-cutted this intersection but we could see the sign marking this junction below. From here it was a fairly steep climb up the slope. The spikes on the snowshoes were welcomed as well as the ascension bar on the heels of the shoes to help grip the slope.

About quarter-mile up the South Elbert trail we ran into a pair of guys who had a campsite going just off the trail. They cleared a flat patch out and looked as though they had bivy sacks around a campfire. They also had a pretty good size bottle of Captain Morgans. Impressive! They talked about taking a couple of days to get up to Elbert. Not long after passing them the trail curls to the north and finally begins to work on gaining the east ridge. There is one long sweeping switchback that took us back east and then we gained the ridge and headed west the rest of the morning.

A third of a mile up the ridge at 11600 we entered a large meadow with some deep snow! At the far end of the meadow as the trench re-entered the trees we were amazed to find even the trench was over a foot deep, the snow itself may have been 3+ feet deep. Very quickly we ran into a junction with two clear trenches heading out from it. We tried left (south) first and went 50 feet before we figured it wasn't right. We backtracked and then headed north until the tracks ended as well. It was then we saw a single set of tracks post-holing miserably up the slope from a man who was up well before us this morning. We followed him with our snowshoes and found his tracks did regain the ridge crest and a clear path up. Past this point it was all wide open. Our path gained a saddle at 12,400 and we could see the clear wide open ridge climb the rest of the way to the summit. On the north side of the major hump on the ridge past this saddle (12,500) we dropped snowshoes and went to microspikes. For the first 100 feet above here we nearly regretted it. We were postholing a foot in at points and it was slowing us down, but beyond that it was plenty of rock and wind-blown snow.

We kept trudging along what was quickly becoming an endless ridge. Around 13000 Denny decided we was tuckered and opted to turn around. David and I wanted to continue on. Optimistically we hoped the summit run wouldn't be too much further, but it did indeed just keep going. Around 13400 we hit the steepest portion of the ridge. You could see it from afar where the ridge narrowed and just went up. The drop-offs to the Box Creek Couloirs were just off to our right. Faintly in the snow we could see the switchbacks of the summer trail and we used these to help ease the ascent through this section. Around 13800 things mellowed out again. The summer trail sweeps south across the east face at this point but we just made a bee-line for the summit. We would stick to the rocks where they were showing and would try to find the snow that was firm enough we wouldn't post-hole a foot into it. 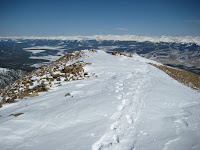 We finally at long last gained the summit at 12:50pm. We had to climb up over a 4 foot snow wall to gain it which David jokingly compared to the Hilary Step on Everest. We spent 19 minutes on top taking in as many photos as we could. The views were just outstanding. Two other guys from the group of 4 that started near us also followed us to the top. The winds were strong but not overbearing up there.


Summit panorama video from Mt. Elbert. Beware the noise of the wind.

As we began the descent the fun was just beginning, and I mean this in a good way. We were trotting down the snow slopes from the summit with great ease letting gravity do all the work. The small post-holing that slowed and tired us on the way up was now a traction device slowly our jumps and trots on the way down. We tried to glissade in a few short sections but mostly the snow wasn't firm enough to allow a good slide. In an hour and 10 minutes (took us 3 hours to ascend that section) we were already down to our snowshoe stash and took a nice break there to resituate gear. We would be dropping layers and extra gear most the way down to handling the warming temperature.

We wondered along the descent if Denny had already made it to the car and I finally decided to txt him as we neared the end of the ridge and he confirmed he was getting back. We made just enough stops to hydrate and grab snacks on the descent. When we hit the 4WD TH once more we took a longer stop to mount our snowshoes on the packs again. I also opted for a fresh pair of socks at this point to walk the road out with. We TXT-ed Denny that we were starting the road and he said 45 minutes to go. We did the road out in 38 minutes. It was 4:10pm when we hit the car again and were feeling great. Very pleased with the summit and the views today. Beautiful route and would love to do it again.

BackCountry Navigator on my Droid Bionic worked splendidly for this entire hike. It even survived my own stupidity in having dropped it in the snow on the summit of Hoosier Ridge yesterday. Today I was much more careful. Included for download here is a KML including the track taken by BCN.

To see all the photos from this hike click the photo below and it links to my Google Photos Album: 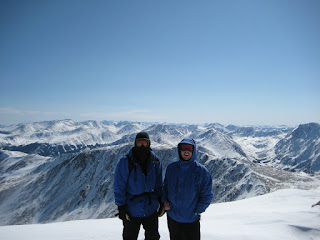