We hit the trail from Hoosier Pass at 9:30am. The weather looked perfect for the day. There was a fair amount of snow on the ground at Hoosier Pass and so we started right away with snowshoes. The main trail heading east was well packed into the trees and so its possible snowshoes weren't entirely necessary, but we always like to have them. It was a clear trail to follow that led us out of the trees and into the shorter brush. We ascended mostly to the north of the crest of the ridge. At around 12000 we left the last of the brush and it was open meadow ahead of us. At this point there was also no clear trail anymore so we just navigated by sight to what seemed the high point of the ridge.

At 12,400 we hit a level patch on the ridge and the depth of the snow was worn down low so we decided to drop snowshoes. We wouldn't regret it past this point. We instead switched over to microspikes which we would appreciate for the extra traction. The smartest thing I did all day at this point was I made a waypoint on my GPS for the snowshoes. They were out in the open and we figured easily spottable on the way down. We would learn otherwise.
We followed near the crest of the ridge and finally topped out for the first time at around 12,800. This meant we were up 1300 for the day already but most of the fun was yet to begin. It was past 11a at this point and we decided to 2pm as the absolute turn around point to ensure we'd be down by dark. So we proceeded on. This would also be the first of our down climbs over various humps on the ridge. One lesson we learned on the ascent, the hard way at times, was to face the humps on the ridge head on. We would at times try to skirt the humps on the north side thinking it looked like the shorter route but it never turned out to be the case. Made the mental note then to stick to the crest of the ridge for all the descent.

As we progressed further east-ward we got great glimpses of Mt. Silverheels to our south. We were surprised to see a set of power lines running up through the gap between Hoosier Ridge and Silverheels. The snowcover on Silverheels was thin enough it appeared to also be a safe winter climb at this point in the year. We continued to find mostly solid and wind-blown snow as we continued on the ridge. The wind got steadily stronger as we moved on.

As the ridge began its curl to the north the elevation was just over 12900. We found it hard at this point to see exactly where the Ridge summit was. We could see tall humps ahead and hoped for the best, but the GPS would tell us otherwise. As we crested on one of the greater humps on the ridge over 13100 and about a mile from the summit still Dad finally said he'd had enough. This was after all supposed to be merely an acclimation hike for Elbert tomorrow and we didn't want to over do it. David and I decided to proceed on though as we wanted the summit. It was also at this hump that we encountered a tricky downclimb with some steepness to it. It almost required some hands but we made it down the 40-50 or so without much trouble. This was about 12:50pm. From here we could see one last great hump on the ridge and were hopeful that would be the summit. The ups and downs become quite the mental exercise on this hike.

We finally neared what seemed like the last hump on the ridge and then we got our view of the true summit. Sure enough it was one more down climb and ascent ahead of us. We could see that a short-cut was available to bypass the second-to-last hump on the east, and this would work in the summer, but a large snowfield guarded it this day and it was steep enough we didn't want to chance a slide traversing it. So we hiked near to the top of the hump to start making our way finally towards the summit hump. It looked liked forever to descend and ascend back over to the summit hump. Elevation-wise we had already topped at 13300. The descent took us back down to 13200 before we had to get back up to 13350. It was 1:44pm when we summited which was 15 minutes before our absolute turn-around time so we did well.

The summit was windy so we didn't stay long. Sadly we did stay long enough for me to drop my Droid Bionic into the snow. I had been putting it into a zipper in my jacket and this time I forgot to close the zipper and it fell out on me. Was fortunate that the snow seemingly didn't affect it even as a chunk of it got in the headphone jack. We spent no more than 6 minutes on the summit and then headed down. We were wondering if we could catch Dad on the descent if we kept moving well enough. We made great time on the descent but the ups we hit were quite a challenge. We could feel the burn in the legs every time we had to go back up 100 feet just to get past another hump. As we descended back around the bend on the ridge and started heading west towards the Pass we stayed closer to the crest the entire way. This put us south of our ascent track which would come into play as we started nearing the snowshoe stash. We were looking attentively for them as we descended but came down about 300 feet away. As we reached a point where I was sure we'd passed them I checked the GPS and sure enough it showed we were off from the stash waypoint. I backtracked uphill and to the north a ways and found them, thankfully. We put them back on to ease the descent and made our way back to our tracks from the morning. We never did see Dad on the descent and as we proceeded I texted with him and found he'd already made it back to the car. We made great time coming back down into the trees and to Hoosier Pass. It was 4:07pm when we completed. This put the ascent time at around 4hrs 15 mins. The descent time at 2hrs 12 mins. We never did have to worry about facing the dark.

BackCountry Navigator on my Droid Bionic worked splendidly for this entire hike. It even survived my own stupidity in having dropped it in the snow on the summit of Hoosier Ridge. Included for download here is a KML including the track taken by BCN.

To see all the photos from this hike click the photo below and it will link to my Google Photos Album: 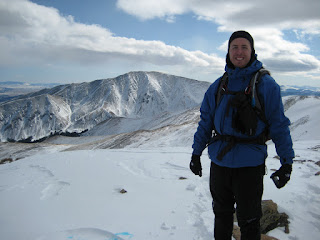