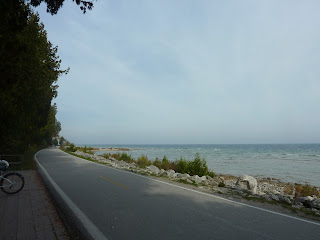 Our pastors conference ended things nicely the day before and gave us an entire free day on Wednesday to do as we pleased. Being so close to Mackinac Island Sarah and I decided to get ferry tickets and head over there. I had done some research on the hiking here ahead of time as well. I found some decent maps outlining trails all over the island to get from place to place. As we arrived we debated what we wanted to see and ultimately settled on renting some bikes. 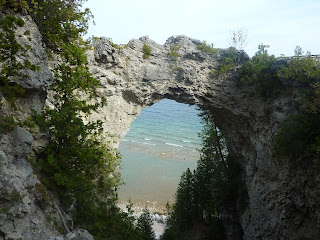 We decided to try the loop highway around the perimeter of the island. This would be the first time on a bike for Sarah since college and she did awesome. We started to the east from downtown and took time getting used to these unfamiliar bikes. They both came with big baskets on the front but I ditched mine before we even left the rental place. It was great riding on the "highway" with no cars to be concerned of. We would even be thankful that the bike traffic was quite minimal most of the way around the island. Sarah pointed out many of the places she had become familiar with on the District Youth Gatherings, including Mission Point.

As the highway turned north it wasn't long til we saw the sign for Arch Rock. There was a nice place to park the bikes here and Sarah decided to stay with them. I followed the trail staircase up the steep slope to the parking lot and viewing area for Arch Rock. It was quite a neat sight to have here in Michigan. I didn't stay long and joined Sarah again on the bikes. 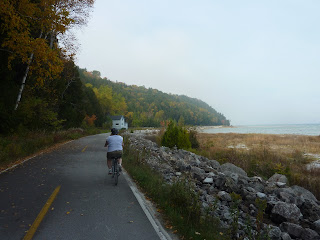 The ride along the eastern edge of Mackinac Island was quite beautiful as the island nearly cliffs out above the highway while also giving nice rocky beaches to the side of the path. The skies were relatively clear on the east side giving us some great temps. We kept a relatively modest pace snapping some pictures along the way. When we first saw the maps we were curious why at British Landing they all advise bikers not to head into the center of the island from there. Come to find out it is because the road/trail ascends nearly the length of that stretch of road and is a challenge for beginner bikers. Most of the north and west sides of the island along the bike path looked similar. The one big difference we noted is that as we rounded to the west things got foggier and visibility dropped. We could barely see the Mackinac Bridge in the distance as we rode along. By the time we began to get back to downtown the skies were whited out and the temps had dropped. The bike hike took us just over an hour to do the whole loop and it was a most enjoyable ride. 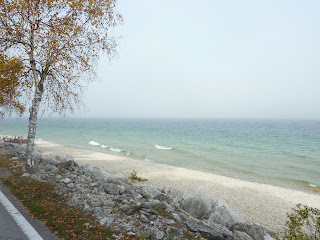 We decided to turn the bikes in though and do some more walking. We had some time still before our ferry would leave so we started to walk up towards Fort Mackinac. We made it halfway up the road to the exit gates to the Fort and quickly realized time would be escaping us. I wanted to get up to Fort Holmes so Sarah decided to turn back and do some shopping while I made my way, quickly, up to Ft. Holmes. I took on a slight jog up the rest of the hill and then made my way along the road behind Fort Mackinac jogging most of it. At Garrison Road I headed left for a few hundred feet til the sign for the Rifle Range trail hit. This was a pretty clear trail and an opening through the trees that ended at Rifle Range Road and the hill up to Ft. Holmes. A short jaunt to the west on Rifle Range Road put me at the staircase ascending up to Ft. Holmes. When I made it up there I was disappointed to find that visibility was near nothing. No great pictures to be had of the rest of the island or Lake Huron. I didn't stay long and descended quickly back to downtown for the ferry ride away.

The photos from this hike as well as our Boyne Mountain hikes are in my Google Photos Album. Just click the photo below: 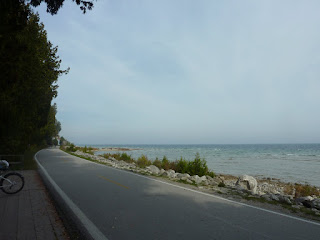