The hiking I was able to do at Boyne Mountain was on conjunction with the Pastors Conference that our district had taking place there for a few days. In looking forward to this I was doing all sorts of research on hikes in northern Michigan near Boyne hoping to take advantage of the free time the conference offered us. I'd found short tracks for the walk up Avalanche Mountain in Boyne City (only about 200ft) and I'd found ways to get on sections of the North Country Trail that runs through northern Michigan. I wasn't able to find any information on the web specifically about hiking at Boyne Mountain Resort so I hoped for the best when we arrived.

As we enjoyed the beauty of the resort area and looked up the small mount it was clear that simply walking up the face of the mountain at any particular point would make for a reasonable hike. So the afternoon of our first full day of conference let out and I worked it with Sarah that I would hike along the base of the mountain to the south aways and then ascend to the top. I would meet her at the top of the main chair lift which they had running at 3pm everyday. So I worked my away along a slightly used road and found a simple trail through a hundred feet of woods that put me further south along the face of Boyne. The slope was cut of grass about halfway up until it became steeper. As I worked my way south I found a 15 foot wide swatch of trail cut to the top of the peek and reasoned this would be an easy place to head to the top. As I made the top of the slope I found a wide open ski trail that led along the crest of the mount and made my way over to the ski lift where I met Sarah.

We decided to walk down together. There was a slight trail leading down directly to the north of the ski lift which cut directly through the grass on some sand. It was relatively steep so we made slow going on the way down until we hit the more leveled out grass. We'd later learn this wasn't the desired way down as there was another mown path a little south of the chairlift.

We decided to ride the lift up and down a few times to enjoy the views and the amazing fall colors that were still on around Boyne. With time to spare I decided to have another hike and explore the northern parts of the mountain. I left Sarah to enjoy the lifts more and I hopped off at the top and headed west along the road/trail atop the mountain.

This road curled to the north as it progressed and I was greeted with a beautiful open view of the eastern holes of the golf course. There was also a mountain house in this area and some workers taking care of one of the lifts. As I moved past this area I noticed a clear trail heading into the woods and so I decided to try it. It wound back and forth every 20 feet down a slight hill. It then oddly starting cutting straight west almost back to the road. As it neared the road it then cut north again and wound its way down the slope in the trees. I was thankful to finally be on a nice forest trail and curious to learn what this trail was for. I would later find out it was one of the many bike trails running around Boyne, but hey, they double nicely as hiker's trails.

As I moved along I checked the GPS to see where it was taking me and began to wonder as it kept moving towards the northwest which was away from the Resort. As I began to complicate bailing on the trail it suddenly turned sharply to the east. I followed to and was pleased to see the trees turn into evergreens and almost had the feel of a Colorado forest trail for a moment. It finally spat me out into a clearing near Mountain Pass Rd. Using the GPS I decided not to walk the road back and instead hit more of the mountain. I followed a side road south past some of the living areas and back up onto the mountain a little ways. I finally found an open ski slope which was workable to lead me back to the resort.

On Tuesday we were given more free time in the afternoon. Sarah decided to head back to our hotel for just awhile so I headed out to explore more of the mountain. I noted on the topo map from the day before that I had never quite made it over to the southern high point of Boyne Mountain so this became Tuesday's objective. I started along the same road at the base of the mountain heading south and remained on it as it began to curl to the southwest and into a wooded area. I found some ease in the steeper slopes in there and bushwhacked through the trees to an opening at the top of the ski hill. I had to walk through the thicker, taller grasses from there to reach the top of the slope and a little hut that was there.

From there I followed a wider ski trail northwest along the top of the mountain and found a Lodge with a parking lot. I was hoping from there to find another trail into the woods and sure enough it was there. A great wide trail took me northwest along the top of the mountain. Along this path I saw a deer a hundred feet ahead, but he didn't stick around long enough for me to get a good photo. This trail spat me out on the dirt road near the top of the main lift I was at yesterday. I followed the road and then my trail from yesterday to head south again along the crest of the mountain and descended the mowed path I had ascended the day before. This brought me back to the bottom along nearly the same path.

Very pleased with the hiking on Boyne and had just enough elevation to get the heartbeat going. Would be happy to return to explore more of the bike trails next time.

The photos from this hike as well as our Mackinac Island hike can be found in my Google Photos Album.  Just click the photo below: 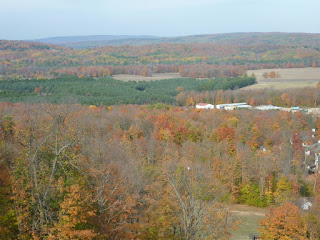