The only plan for this morning was to hike Mt. Royal. My mother wanted in on a hike and we also could incorporate the boys on this so it would be a full family hike. Matt and Sarah decided not to go. They would instead get some good shopping done in Frisco. The hiking group hopped in the van and drove over to the trailhead off 2nd Ave. and were on the trail to Royal just before 9am. We ran into a massive biking event going on with the trailhead area as a staging area.

This was the same alternate trailhead area we attempted in February which ended us up bushwhacking through 3 foot snow drifts on the slope to find the main trail. We were hoping to have learned from our navigational mistakes to stay on better trail this time. We started at the edge of the clearing that has the sign "Mt. Royal TH > 0.2mi" and worked our way along a wide easy trail that started up the slope. Just a little ways in we met the junction we hit in February where we went left and started ascending further. This time we went right and kept on a line directly for the main trail. This led us to another junction another couple hundred feet in that we then took a thinner trail up and to hiker's left. After about 200 feet on that trail we hit the main trail and were pleased to see it.

Thus far all 3 boys were doing fairly well on their own. The younger two were needing some encouragement and Luke was still a bit tired from the Bierstadt hike of yesterday. The early parts of the Royal trail aren't too steep and allowed the boys to work the trail on their own pretty well. It wasn't too long and we hit the clearing with some of the old mining evidence. The boys enjoyed a little break and a few photos again like last year. After this begins the first steep trail section. It ascends for just a few short hundred feet. I have recollections of having carried Jonah down through this section last year. This year Seth finally gave up at the bottom of this section and I ended up carrying him up the steep section instead. It's a true workout when you have an extra 30 lbs. on your shoulders to lift with every breath. Thankfully Luke and Jonah both made it on their own through this stretch. 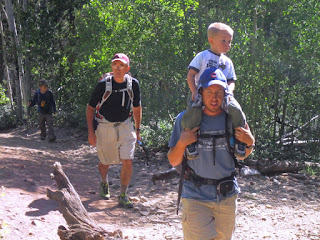 As this steep section ends the trail flattens out a bit as it traverses to climbrer's right for a few hundred feet. In this section you get some of your best views of Frisco, Dillon Reservoir and Grays and Torreys from the Royal trail. That traverse ends at elevation 9800 with a sharp left turn and this begins the last steep stretch on the trail. It ascends 400 feet somewhat quickly to the climber's left towards the small saddle between Royal and the next higher peak. Jonah really struggled through here and I took my time with him stopping as often as he needed it. As you near the top of this section the trail turns slightly to the left and mellows out some as it heads towards a big trail junction. At this junction if you go straight it is the trail heading towards the rest of the Tenmile Range. If you go right you get up to Mt. Royal in just a couple hundred feet. I was able to encourage Jonah and Luke here by letting them know we were almost to the top and snacks were awaiting us. We reached Royal's summit just after 10:30am and sought out a place to sit in the shade to eat.

David went on ahead and climbed as far as he could along Royal's summit ridge to the point where you can finally overlook Frisco. The rest of the group enjoyed some good snacks. Luke has developed quite a fondness for string cheese on mountains which I helped him start yesterday on Bierstadt. The younger two enjoyed teddy grahams and mini oreos. We spent about 15 minutes up top. We met another nice family group who needed pictures taken so we helped them and they turned around and helped us. We ran into another family up there who asked us to take their photo for their Christmas cards. We helped and they obliged in taking our own family photos from the top. 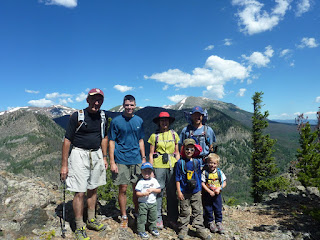 For the descent David took off ahead of us so he could get ready to leave for the airport. Seth quickly grew tired as we began our descent and was throwing a fit no matter what we did with him for the first 15 minutes. Luke and Jonah were doing well but having trouble gripping the trail as it grew steeper. I ended up holding both of their hands through much of the 400 foot steep section to help them steady. At the bottom of the upper steep section I took over helping with Seth as Dad went ahead with Luke and Jonah. As we began the lower steep section I began carrying Seth on my shoulders. I did this down to the clearing with the mining stuff and then went ahead and carried Seth the rest of the day down. I got a call from David at about 11:20am that he was back at the condo already, he literally flew to the bottom. I pushed ahead with Seth and found the trail breaks towards the alternate trailhead and had no problems finding the way back to the trailhead. I told the others Seth and I wouldn't wait by the van and we just started walking back into Frisco. We made it to 3rd and Main when the others called from the van to see where we were at. They were already to 4th and Main and made it back to the condo just ahead of us. We were back home right around noon, in time to help send off Matt and David to the airport.

I have the basic track of our hike up to Mt. Royal and back down. We hiked from the trailhead area at the end of 2nd Ave. and not the true trailhead. This shows our route to join the main trail. We hiked on established trails so this apparently must be a somewhat regular route.

You can see all of the photos from this hike by clicking the below photo and it will link to my Google Photos Album: 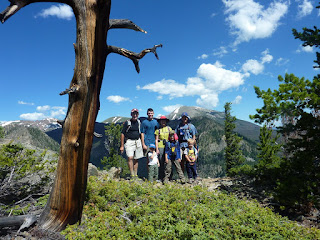