This report should begin with a brief introduction as to how we chose Mt. Bierstadt for summer 2011. Part of this choice was to find an easy, relatively short, 14er that my 6-year old Luke would be able to attempt. Last year we did Mt. Democrat at just over 4 miles round-trip and he handled it well. This year we were looking at the other short options in the Front/Mosquito/Sawatch range and Bierstadt, Quandary and Sherman were the ones that popped up. I was even considering letting my middle son Jonah at age 4 give it a go this year if we did something like Sherman from the Iowa gulch side. Ultimately it appeared as though Jonah was not ready yet so we decided on Bierstadt for Luke.

The other aspect of the Bierstadt decision is that it was about 18 years ago now that my brother, father, and I first did it. And we had quite the experience on it with the willows. Upon leaving the parking lot on that fateful day back in 1993 we got on what we thought was the trail and headed right into the willows full force. We spent the better part of the next 2 hours working through mud and faint trail segments in the mess that is the Bierstadt willows. It was quite the experience and so we were most curious to make a return trip to Bierstadt to revisit these old memories.

Today's attempt on Bierstadt is Luke's 2nd 14er attempt in as many years. He is 6 this summer and was excited about the opportunity. Experience over the years has us starting earlier and earlier and so it was a 5am departure from Frisco today to hit Georgetown and Guanella Pass. On this particular hike, there was also some concern of the parking lots already being full and so we did want to arrive plenty early. Our arrival at Guanella Pass was just before 6p and there were at least 10-15 cars in the lower lot already. As we readied our gear at the car more and more cars were pulling in. We were on the trail just after 6am.

It was fairly chilly to start and Luke's fingers were instantly getting cold, even with gloves on. We had him bundled up in a long-sleeve synthetic layer with a goretex jacket over it. He had a ball-cap and gloves on with zip-off pants. Once we were going a few hundred feet most of him was keeping warm pretty well. The fingers, however, well, they wouldn't really warm up for him til we hit the sunlight up on the west slopes. 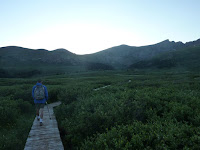 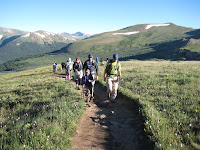 Within a few hundred feet on the trail we were already being passed up by other hikers. This was a bit unusual for the rest of us as we spent much of our time in Chicago Basin the last few days passing up everyone else. With Luke, we took it as his pace. The hike from the parking lot actually descends a little bit into the marshy willows but there are a handful of boardwalks that keep the trail out of the mess. What a change from 18 years ago! After passing through the bulk of the willows the trail starts larger switchbacks up the west slopes of Bierstadt. As we rose higher the views became pretty fantastic of the other front range peaks nearby.

When we gained the northwest shoulder it was also the moment where the sunlight finally caught up to us and seemingly raised the temperature a few degrees. There were a dozen or so people enjoying a break there so we let Luke have some time as well. Thus far the most enjoyable part of the hike for him was greeting all the little dogs that were making the trek up. He was having fun trying to make friends with them as they jumped around the trail.
The ascent along the northwest shoulder is pretty easy terrain and not too steep at all. The trail was always pretty wide so the mass of people coming up and down could move freely. We were stopping every 5-10 minutes for Luke to get quick breaks. He'd get some water and he'd be ready to go again. He never seemed to really tire out though so we were all encouraged. As you get nearer the southwest ridge of Bierstadt the appearance is that the ridge and the summit just aren't that far away. However, the more you ascend the west slope to the ridge the more it seems the ridge keeps getting further away.

At any rate, we finally gained the ridge and Luke was still doing well. The trail mellows out a bit before the final 200 foot push up the class 2 rock to the summit. I wasn't sure how Luke would handled the rock scrambling as he hasn't done much of it before but as we got moving on the rock he was like a mountain goat. He got the hang of it real quick how and when to use his hands and what sorts of routes to pick betweenst the rocks. I have some good video of him moving through the rocks and he showed it to be no problem for him.

See video of Luke scrambling on the rocks

We were able to summit at about 10:15am with probably almost 100 other people. This was by a long-shot the most crowded I had ever seen a 14er. Clearly much has changed in the 20 years we've been doing this because I can only remember a handful of people being on the hike when we did Bierstadt in '93.

We found us a few rocks to drop gear on and snack while on the summit. I talked to a few people heading for the Sawtooth (without helmets?!) and they also recommended hiking the east ridge route on Bierstadt sometime. We were enjoying near perfect weather up there (which is one of several reasons we suspected for the crowds) and enjoy a good half hour on the summit.

See video of us on the summit 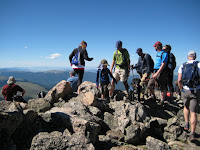 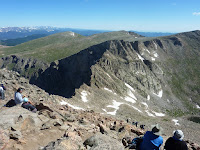 Luke made good work of the class 2 rock on the descent as well only needing me to help him on a few spots. He was feeling great and full of energy so we were pleased the altitude wasn't hitting him much at all. I suspect is also helped he'd been at at least 9000 feet for a week now and had done some hiking already above 12000 ft. The biggest challenge for Luke came on the steeper descent of the trail on the west slopes. Though he had on some pretty good hiking shoes they just aren't big enough to get a lot of grip on steep, loose dirt. I held his hand for many of the steep descent sections to help him get used to finding traction on the trail. We were making great time though on the descent and Luke wasn't needing many stops.

On the descent I stopped at a great vantage point to take in all of the Sawtooth-Bierstadt ridge with a snowfield in the foreground. I stitched several shots together into this great panorama:


Though the crowds can be a bother, it was also interesting meeting some other groups with younger kids and seeing who was the youngest of the day. We were impressed to meet a young 7-year old girl who was no bigger than Luke, but she did not summit that day. It would appear Luke was the youngest of the 500 or so on the trail to summit that day. The descent of the lower west slopes went well and before long we were hitting the boardwalks out to Guanella Pass.

We made it back to the car right around 1pm and were shocked to see how the highway was just lined with vehicles. We had heard that once the lots were full there was supposed to be no more parking but that sure didn't stop anyone from lining Guanella Pass with cars on both sides of the road. We were pretty hungry at any rate, and so left the Pass at 1:15pm hoping to hit the Qdoba in Silverthorne. Much to our dismay there had been a major truck fire just past the Eisenhower Tunnel and we ended up sitting, starving, for about an hour on I-70 until things began to move. 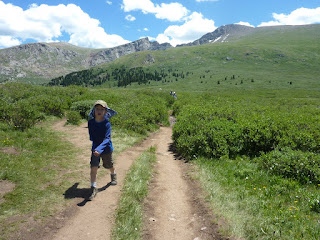 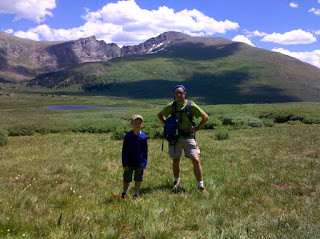 The entire track of the Bierstadt hike is available here as well as waypoints for the TH, the Sawtooth and summit.

If you would like to see all of our photos from this hike you can click the photo below and it links to my Google Photos Album: 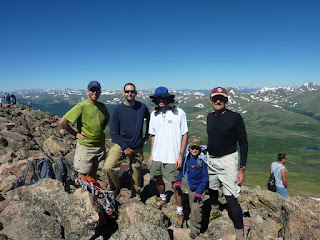