Woke up at 3:50am. Got the stove going and boiled water for a tasty breakfast of oatmeal and chocolate, but only Matt and I partook. We were on the trail by 4:27am for Twin Lakes. We made quick work of the trail to the junction and then headed further upwards towards Twin Lakes. We had heard there were some route-finding issues along the way and we did find this to be a little bit true. As we hit the first rock slab traverse it ended on a big rock slab with no obvious exit until we headed up the rock about ten feet or so and found the trail to have switched back on us. There would be two more rock slab areas to come and with careful attention to the terrain we found the trail exit from the slabs relatively easily. After the slabs the trail goes on to hit two stream crossings as it ascends the headwall below the Twin Lakes.

It was just before 6am when we hit Twin Lakes and our headlamps had been off for the last 20 minutes of the climb up to the lakes. We hopped over to the run-out stream from the lakes and filtered our water bottles full. From the lakes the trail winds east between a rock mound and the lakes where a big snowfield still remained. Above this the trail switchbacks upwards and to the east until you meet a humongous rock cairn that marks the entry and exit into the upper basin between Sunlight and Windom.

See video of our arrival at Twin Lakes 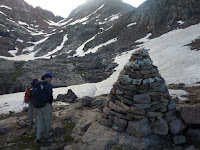 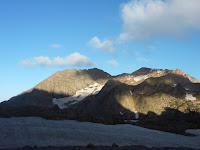 Past the rock cairn another snowfield marks the division between the two trails which could be easily seen in the snow. There was also another snowfield along the Sunlight trail which ended near 13,100. All of the snow thus far was relatively flat and we only used trekking poles to safely pass. After the final snowfield on Sunlight the trail was fairly well marked and proceeded to take us gradually upwards to the scree gully at around 13,400.
The climb up the scree gully is where I put my helmet on finally because of the potential for rockfall. Climbing through here wasn't that difficult and it took a minimal amount of route-finding to get the easiest path. In here we were also finally overtaken by a set of 4 hikers who had been on our trail since the lakes. The gully tops out at 13,800 or so at a notch where you turn climber's left to head for Sunlight's summit ridge.
On the ridge we traverse left under the initial set of cliffs and decided to traverse further past the lower snowfields that we met. This led us to a mostly dirt gully which we climbed to the top where we hit a little bit of snow and ice and a new set of cliffs above us. It was this point we found the first window in the ridge. 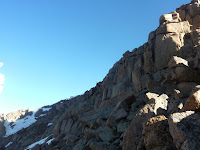 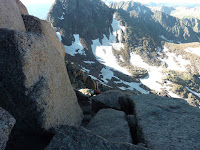 There appeared to be 2 climbing options through these cliffs and a potential third near the window in the ridge. David led the way in climbing the "left" option through the cliffs and made it well. Matt started up next and made it a 1/3 of the way up through this tough class 3 section and decided to turn back. Denny and I followed behind and found the terrain to mellow for a short while after the climb. This quickly led us to the chimney where the other hikers said they'd dropped their packs. It took an exposed step down from a rock to gain entrance to the chimney which was actually a fairly easy climb even with my pack on. After the chimney it was a short walk on the summit ridge to the summit block area.


See video of the climbing along the ridge

We arrived at the summit blocks at 8:25. I'd seen the summit block area hundreds of times in photos and videos and it was still not what I expected. The blocks seemed bigger and steeper and more immense than I had seen in the photos. I fairly quickly decided I wasn't going to attempt the blocks. I had at least figured I'd make it up to the step block but decided even the climb up the first friction slab wasn't going to be worth it. Denny also said no to these and he headed down. David debated for awhile and decided to at least head up to the step block. He made it up there and then debated for another few minutes on whether to make the "leap of faith". He went for it and that part was easy and he made the true summit. He quickly turned around and now worked out how to get back down.

He was leaning against the actual leap and instead worked on hitting the lower step that is hidden behind the step block. He tried this by basically hugging the upper rock and trying to lower himself down to the step. First try failed as he said he was about 6 inches short. He got a new grip and tried again to lower himself down to the step and this time he made it and was back on the step block. He took a few minutes there to catch his breath and grab some pics and videos and then worked his way down the friction slab. He went to the far left here and used handholds to lower himself down the slab and back to safer grounds. 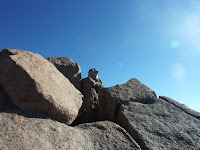 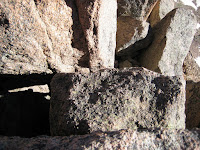 The descent from the summit area was fairly easy. The chimney posed no issues and we were back to the steep cliffs which posed the biggest problems on the way up. Denny had found a descent next to the window in the ridge and helped us and 2 other climbers descend through there and back to the top of the dirt gulley. The rest of the descent to the notch went pretty easy.
As we descended the scree gully other hikers were descending with and ahead of us so we decided to see what route to Windom these others took. As the scree gully mellowed out we scouted a good route through the snow fields around the basin and planned on that. This began with a traverse across a relatively steep snowfield which caused us to pull the ice axes out for the first time. Past there the others were traversing below the remaining snowfields through the rocks where we decided to stay higher and enjoy the snow. We traversed mostly snow and one patch of rocks around to the Windom side where it was a steep talus climb up to the saddle.


See video of the mountain goats at the saddle 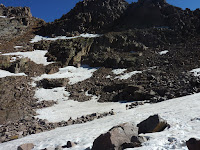 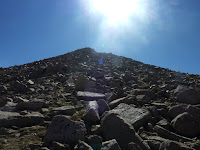 We met up with some more mountain goats at the saddle who proceeded to follow us up the ridge. At about 10:30am we hit the notch on Windom's ridge and were stopped by the apparent difficulty ahead. We couldn't figure out exactly how to proceed from there. We were pretty sure we needed to head straight up and over the rock at the notch. David started up that way but wasn't convinced that it was exactly right. The others weren't sure what they wanted to do either so I decided to head left and descend below the ridge to see if that would be better for everyone. It started okay so Denny and Matt followed. This route wasn't terribly dangerous but it was a lot of work scrambling through the rocks below the ridge crest and we spent a lot of time and energy trying to regain the ridge. David found things moved much better on the crest which was indeed the standard route. We finally regained the ridge not long before the summit area. We summited Windom around 11:05am. We stayed up top for about 25 minutes until it became too crowded and our time was up. We were surprised to see one of the mountain goats had followed us and another group all the way to the top. 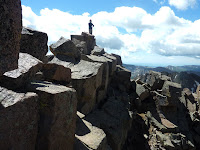 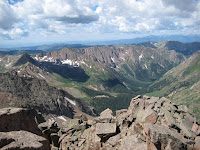 See video of a 360 summit panorama from Windom Peak

We descended along the ridge crest all the way back to the notch and found this to work well for us. The descent into the notch was not bad either and we worked it and the rest of the ridge well down to the saddle with Peak 18. In previous days I had considered going over to Peak 18 but at this point today we had worked so hard there was no desire left to add more to it.


See video from just above the notch on the ridge

We weren't sure the route back to Twin Lakes from windom but figured there'd be enough cairns to keep it easy. From the saddle the trail was well marked and we also followed two other hikers on a steep descent from the saddle. This worked until the trail seemingly ended at cliffs and a snowfield. The two hikers ahead of us scooted down the steep rock and short sections of snow between more rock. We decided to traverse to the middle of the snow and glissade down. This went well and was actually enjoyable. That snowfield left us just before the great big rock cairn marking the exit from the upper basin.

See video of our glissading below Windom

See video of a pair of marmots at play 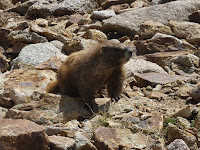 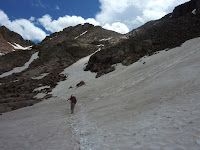 From there it was a few quick switchbacks to Twin Lakes. It was about 1:05p now. The descent to the lakes and on down to camp in Chicago Basin was a quick slog through the terrain we had done in the dark. We were all surprisingly tired after this hard-working hike. We hit camp about 2:30pm.

We, all 4 of us, tuckered out in the tents for awhile getting some rest and sleep. Around 4pm we were mostly up again and shot the breeze for awhile til supper. It was more freeze-dried beef stew and lasagna for supper again tonight. We were more hungry this time around and also made some really old freeze-dried chicken and rice and polished that off. We got packed up early that night and planned to leave an extra hour earlier in the morning for Eolus.

I had serious technical issues with my GPS on today's hike. It tracked well up to Sunlight's summit and even on the traverse over to Windom and up. At Windom's summit the battery was low so I decided to swap it out up there. Usually the Maemo Mapper app saves my track when I shut it down and reload, well this time it didn't. On Windom's summit I realized I'd lost the day's track so far. In my frustration I didn't even bother to track down from Windom and bailed on it.
To re-create things I've pieced together a KML of the standard routes and manually plotted my estimate of our traverse over to Windom from Sunlight. That KML with its tracks and several waypoints is available for download.

If you would like to see all of my photos from this hike you can click the photo below and it links to my Google Photos Album: 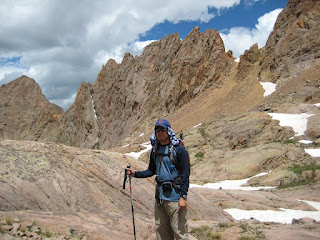