Today was setup to be our family hiking and acclimation day and it worked out very well. Us guys arrived in via plane to Denver last night and arrived in Frisco near midnight. The rest of the group had driven out and arrive early Sunday afternoon. We all had a good breakfast at our condo before setting out for Loveland Pass just after 9am. Things looked beautiful at Loveland Pass. We all hopped out and readied to hike up to Point 12,915. Sarah had a terrible headache this morning so she stayed down near the pass and took pictures while the rest of us hiked up. The boys all three started strong. We were especially impressed with Seth who really took to the trail well. He would sit a minute to rest, and then he was up ready to hike again and he kept saying "come on guys!". It only took about 20 minutes though and the altitude quickly started having its affects on the boys. Matt, David, and I decided to hike on ahead to give us a chance at hitting some 13ers in addition to hiking with the others. We made quick work on the trail up to Point 12,915 to the well-cairned break-off trail towards "Cupid". After 200 feet or so on the traverse to "Cupid" we hit a snow-patch. It wasn't too steep and the snow was quite soft so we walked across it safely. After this the trail continues to traverse around Point 12,915 and eventually makes an ascent upwards to the ridge to gain "Cupid". It was a longer hike than we had anticipated but we still made good work of it. It was about 11:15am when we were on the summit of "Cupid". We debated about going over to Grizzly Peak but realized on the topo that it would be a substantial time project. I gave Denny/Dad a call to check on their progress and they were still not at Point 12,915. He also said Luke got some altitude sickness and was slowing down a bit. We decided to make our way over to Point 12,915 and to hit Sniktau with the others instead.
The ridge walk to Point 12,915 from "Cupid" went quite easily and we beat the others by just a few minutes. Luke, Jonah, Seth, Marcia and Denny all made it to Point 12,915 and only Seth was carried for a few minutes. Just the guys decided to go over and hit Sniktau since the younger ones weren't acclimating all that quickly. We made quick work of the ridge over to Sniktau which involves ascending to a false summit and then down a hundred feet or so and on to the true summit. We were on Sniktau around 12:25pm. As we were making it up there we got a call from Marcia, who had stayed at Point 12,915 with the boys and said Jonah had fallen on some rocks and scratched himself up a bit. She decided to start descending with the boys. I spent only a minute or two atop Sniktau and descended rapidly ahead of the others to help with the boys. While it took around 40 minutes to get over to Sniktau I was down it and below Point 12,915 to join up with the boys in about 25 minutes. The descent was just steep enough I ended up holding Luke and Jonah's hands to help them with the loose terrain. As we made it back to the parking at Loveland Pass it looked as though it were about to rain cats and dogs on us but we were fortunate that it was no more than a minute or so of sprinkling rain.

Great first day of hiking for us and the weather held enough to give us a beautiful day.

My track for this hike was taken with my Nokia N800 tablet using a Nokia bluetooth GPS. For download I'm making available my KML track as well as the waypoints for the peaks we climbed and for Loveland Pass:

If you would like to see all of our photos from this hike you can click the photo below and it links to my Google Photos Album: 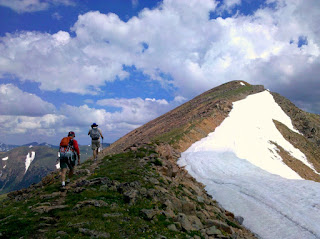