Route: Frisco to Breckenridge and Back. Car drop-off at Copper Mtn, then biked Copper Mtn. to Frisco.
Distance: 32 miles
Time on the Bikes: 2 hours, 30 minutes

We spent our Friday morning putzing around the cabin trying to decide what to do with this day. It was technically a rest day after having done 4 straight days of hiking including all of Chicago Basin. We had also bailed on doing Sneffels today so we were left unsure what to do. Talks of hitting Loveland Pass and Grizzly Peak came up, talks of North Star Mountain, talks of going for Peak 1 from Frisco even. Finally, we decided to explore the biking option again as that was a hit last year.

So we walked into Frisco and stopped in at Rebel Sports. They had raised their prices just a bit from last year but still a pretty good deal. We also noticed they had kid options for those who can't ride bikes yet, that seemingly sealed the deal. We got the info and made sure they weren't running out on such a busy day, and we headed back to the condo to get a quick lunch and gear up. 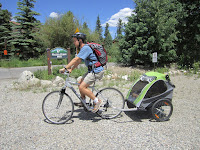 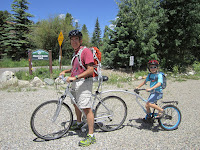 Around 12:30 we were back and did the bike rentals. We grabbed all the gear and then headed back to the condo to load up the boys. Mark started by towing the kid cart with Jonah and Seth in it while Dad had the tag-a-long with Luke on it on his bike. I would learn that the kid cart is about 80 lbs. of dead-weight to tow behind the bike creating quite an amazing workout. Dad would learn that the tag-a-long bike is more of a tactical challenge as it lean and tugs at the main bike in different directions creating havoc for the driver. At least with this one the pedaler on the back can add a little help and isn't so much dead-weight.

We strolled through the back streets and hit the bike path at our usual trailhead where 2nd Ave ends. The first mile of the path is easy strolling behind Frisco and gave us a chance to get used to the "kid gear". After that mile there is a quick switchback and a hill and you ride behind the Medical Center. The next mile and a half take you through a forest that pops you out on the east side next to CO-9. There are some ups and downs in the beginning section of the woods, but near the end is a great section of downhill that gets you coasting out towards Breckenridge. The next mile or so is spent heading towards, around, and past the big High School. The views in here are great as you can see the Tenmile Range and the trail is lined with these purple wildflowers. We took our first break in here to get everyone hydrated.

See video of us passing the high school on CO-9

I was learning quickly that the stretch from here on out was all a gradual uphill into Breckenridge. I was struggling to keep up with the others while towing the two younger ones. There was no coasting, it was a constant hard pedaling to keep speed. After passing the High School and some housing the bike path regains its track next to CO-9. A little over a mile past there you hit the Gold Hill trailhead off the side of the road and we grabbed another rest there to check out the signage boards. At this point we were 5.8 miles with only about 3 to go to hit our Breckenridge stop.
The next 2 miles are pretty basic strolling with great scenery along the Tenmile Range. At one point we passed an intersection where the road to the right had been washed out by the river. We could tell as several points that the river was higher than normal still. I wonder what it must have been like to see that road bridge washed out? The last 2 miles of the trek take you into Breckenridge. There were two underpasses and several easy road crossings along the way. One of the underpasses was nearly closed as the river level was but a few feet away from the bike path. We ended up stopping at the gondola area.

We learned that the gondola was a free ride so all of the group, except for Dad/Denny, hopped on to see where it would go. We didn't think the younger boys had ever been on one before and they did enjoy it. The gondola went uphill just a bit and then over several residential parts to a loading station. We stayed on and it went uphill further to another loading station and we followed it one more time until it ended up at the base of Peak 8. We soon learned this free gondola is basically a people mover and at Peak 8 there is the massive Fun Center. They had the famous alpine slide up there, but they wanted upwards of $15/person, plus Seth wasn't old enough, plus the other two would have to be riders. They also had some sort of an alpine rollercoaster involving tracks running down the side of the mountain. There were several other activities like a climbing wall, a maze and a gemstone panning area. The boys at least talked me into letting them try the gemstone panning ($7) which involved them getting a bag of gems, rock, and dirt and they sifted it in the moving water to get the dirt out of the way.


See video from the gondola ride

We spent a good 30 minutes up there and then hopped the gondola back down to the base and the bikes. For the return ride we decided to switch things up a bit. Luke wanted me to tow him on the tag-along this time and we put David and his fresh legs on the kid cart duty. I took a practice ride without Luke on the tag-along to get a feel for it before setting out. While towing the tag-along with Luke on was physically less strenuous it was more of a technical challenge. Every time he leans it tugs on my bike and it is a constant challenge for the front rider to maintain balance, particularly on hills and sharp turns. While David was challenged a bit towing the kid cart he was fortunate to be getting the benefits of the downhill ride back to Frisco.

The return ride was smooth and enjoyable all the way to the hilly forest taking us back into Frisco. We were all anticipating the great uphill trek that begins this section. Luke and I pedaled it hard and we topped out in the woods without having to stop. The others struggled behind, particularly David and the 80 lbs of deadweight he had to tow uphill. We survived the hills and finally arrived back in Frisco. We ended up dropping the kids off at the house and decided we wanted to do more. The thought of descending Vail Pass came to mind so we headed back to Rebel Sports. We dropped off the kid carts, but it was around 4:30pm at this point. We also learned Rebel closed at 6p giving us a small window to hit Vail. We returned to the condo and had to wait for Mom/Marcia to return with the van from grocery shopping.

We opted at this point to go for a drop-off at Copper Mtn. and shorten the ride for time's sake. If we didn't get the bikes in by closing time we'd be charged the full 24-hour rates. We got the bikes ready, that is, front tires off, and when the van arrived we quickly loaded and headed for Copper. We got dropped off at the gas station just off the interstate on the north end of town. We put the bikes back together and got ready to hit the bike path one more time. Something wasn't right with my bike though. Not sure what happened, but when I re-fastened my front brakes the left pad was rubbing real hard. I could hear it going as I pedaled so I stopped. Tried several things to loosen the pad but it just wasn't helping. I rode the first mile downhill from Copper with the pad rubbing but got tired of that. So I undid my front brakes and decided to pray the back brakes held for the rest of the downhill. From Copper the path to Frisco is pretty simple as it winds around the west side of the Tenmile Range. There is truly very little pedaling necessary for almost the entire path down from Copper to Frisco. The trek when shown on Google Earth shows this path as a downhill slope from 9700 to almost 9000. What a ride! When it hits Frisco it curves around behind town and we rode it back to our 2nd Ave stop again. When we hit Rebel Sports we had time to spare, it was about 5:30pm. Another awesome day of riding.

For the Frisco to Breck and back leg of the biking I had run my Nokia GPS for a track. For the Copper to Frisco leg I didn't carry a backpack so I used my Moto Droid and BackCountry Navigator clipped to my belt for a track. I've put these tracks along with several waypoints into the KML file.

If you would like to see all of our biking photos you can click the photo below and it will link to my Google Photos Album: 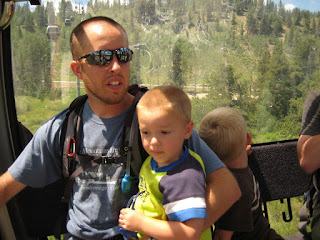