We were up at 3am for round 2 of hiking up to Twin Lakes. The prospect of doing all that hike again wasn't enticing but we were hoping doing most of it in the dark this time would make it go quicker. We were on the trail at 3:26am today, almost an hour earlier than yesterday, and started for the lakes. We would learn that when doing a familiar trail in the dark it doesn't really make it go any quicker, while doing an unfamiliar trail in the dark helps a lot (though route-finding can still be a challenge!). We were to the lakes around 5am with things still relatively dark. It was here that Denny decided that his legs were done. Yesterday had pretty much done it for him and he wasn't going to attempt Eolus' rough terrain without his A-game. Matt also decided to turn around here not feeling his best. After some deliberation David and I decided to continue on. We filtered some water and started trekking upwards from the outlet creek til we found the obvious Eolus trail below the cliffs.

We quickly found the trail ascending to Eolus from the lakes to be much steeper than nearly any part of the Twin Lakes trail. It was in good condition however and we had good traction on it so we moved pretty well. We encountered the first snowfield mid-way up in the bowl below Eolus. We went around it on the wet rocks to the right. Ascended further on the trail to a snowfield blocking the entrance to the ramp. We hit this about 6am and the snow was very firm and slick. We put crampons on to ascend the snow about 30 feet and then traversed another 10 feet or so to hit the entrance to the ramp.

See video of us cramponing across the snow 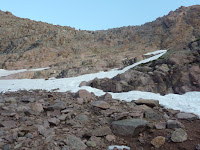 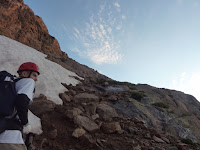 Ramp was snow free but much snow above it putting melt-water onto the rocks of the ramp. At the end of the ramp there were two cairns which makes for a good marker to look for on the descent. We ascended towards the green notch and found another snowpatch blocking the way. We were able to ascend between rock and the snowpatch to a little more trail below the green notch. The green notch was a sustained 30-40 feet of class 3 climbing. David made the comment half-way up "I don't think we're descending this." At the top of the notch we hit the saddle between Eolus and N. Eolus and immediately saw the catwalk. 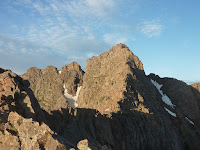 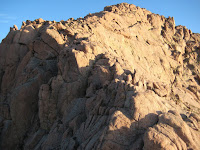 The ascent to N. Eolus looks pretty difficult from here and quite narrow. The catwalk begins with an ascent up a big hump on the ridge. From there it was mixed sections of very narrow ridge, rock slabs, ledges, and other fun on the catwalk. It was mostly class 2 with 2-3 parts of class 3 scrambling as many of the guides say. We best described the catwalk as this "a mental challenge." Physically it is quite do-able but you have to keep your head focused on the task at hand or the exposure can throw you.

See video of us starting the catwalk

The catwalk spits you out on easy terrain below the face of Eolus. There was a snowpatch we saw immediately with tracks on it heading for what looked like rough terrain (this would actually end up being our exit route later on). 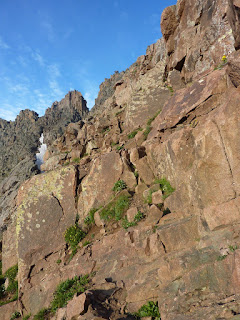 We finally found a crease that moved upwards for what looked like 30 feet and we wedged ourselves in there and followed it to the top. At the top of that crease we found ourselves very near the summit. We found some easy climbing in a steep section of rock with little exposure to gain the summit ridge. At the ridge it was easy scrambling over some rocks to the true summit. The summit area gave us enough space to drop packs and grab some food and phone time. The goat also joined us up top for some extra companionship.We traverse to climber's left below Eolus face to where we thought would be the proper place to begin climbing. We immediately ran into some difficult moves and couldn't see this improving. We backtracked a bit and found a grassy ledge to follow to climber's right for awhile. After this point it was a matter of being incredibly careful on route-finding. We would use the grassy ledges to move laterally to find the "easiest" sections of class 3 to scramble upwards to a newer ledge. After having moved far to the right of the face we began to move left-wards again and found good terrain to move on. It was somewhat frustrating at times trying to find a good route but amazingly, what worked best for us was to follow this wonderful goat that followed us up. He seemed to be finding his own route ahead of us and we would find that where he went was good for us too.

See video from the summit of Mt. Eolus


As always on this sort of terrain we were a little apprehensive about the descent so we started making our way down before long. We would soon learn that route-finding is so much nice going down as you can see far ahead. We would use the grassy ledges to find good spots to descend 10-15 feet. This involved some facing in at times to make easier moves. 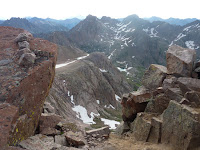 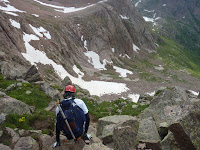 As we neared the last 1/3 of the descent of the face we just could not find a way down to what we thought was the grassy ledge we started on. We found a good ledge that led us nearer and nearer Eolus' ridge crest so we decided to go for it. Lo and behold this ledge spat us out into difficult, but do-able terrain that would lead us to the snowfield and the exit. We went with this and careful made our way down to the snow and off the face, back to the catwalk. One big lesson learned for next time: drop ice axes before the catwalk unless you know you'll need it!


See video after we just finished the east face of Eolus

See video of our return trip on the catwalk

We made our way gracefully back over the catwalk and decided we were a go for North Eolus. The thin ridge looks pretty difficult and exposed from the catwalk but as you get started you quickly find out its much easier going. There are some narrow portions to the ridge but the rock is fantastic and makes for some fun class 3 scrambling to the summit. We spent but a minute or two atop North Eolus.
The descent was also pretty simple and as we descended we scouted the slabby terrain adjacent to the green notch as an alternative descent route. This looked do-able and we carefully made our way to the slabby rock and loose dirt. After having navigated the descent of the east face of Eolus navigating a good route down the slabs and loose dirt was hardly a challenge. At the bottom of the slabs we found a great snowfield to glissade which took us down to the easy terrain above the ramp. We found the two large cairns again and started down the ramp. The snow at the entrance to the ramp was quite soft now so we decided to forego the crampons this time and simply carried the ice axe.

See video of some of our glissade from North Eolus 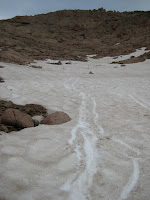 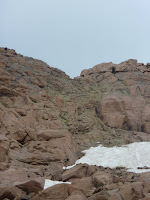 Below here we decided to glissade the lower snowfield instead of bypassing it and that was again a joy. From here it was smooth sailing down to the lakes. Amazingly, our goat friend, whom we dubbed as "Gus" was leading us once more down the trail.


We hit the lakes, grabbed a good snack, and cruised on down to Chicago Basin one more time. We got some amazing photos on the walk out to camp as the clouds and the sun were putting on a display for us. We would have made camp sooner but we were stopping every minute or so to take in the amazing shots. We made camp at around 10:30am.

See video of the return walk through Chicago Basin

Due to low battery issues I was unable to get a track of the entire hike today. My Nokia GPS was done and my Moto Droid with BackCountry Navigator wouldn't get a lock in the Basin. On the summit of Eolus it finally locked and I was able to get a track for the descent route. I've pieced that track with several waypoints in the KML file.

If you would like to see all of my photos from this climb you can click the photo below and it will link to my Google Photos Album: 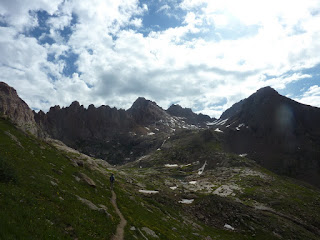