We awoke around 7 curious to see what sort of breakfast the Travelodge would have going. It was pretty standard fair: cereal, danishes, hot waffles. We loaded up on good food and drove down to the train station area. We had read about public parking on the streets nearby and so we put the car on 3rd Ave. and unloaded all our gear for the week. We dragged it down to the station and were checked in with tickets just before 8:30am.

We met a nice man Dan while we waited who was also headed for Chicago Basin. An earlier train left as we waited so we got to see what that would all look like. Come 8:45am they loaded our backpacks into an old red car next to the engine and we boarded our car. We sat in several spots (which ended up being owned by others) til we ended up finding our own seats.

The early ride out of Durango isn't much to see as you mostly pass trailer homes and small parks along the Animas River. About 30 minutes into the ride they start serving in the beverage car. They also seek to sell you all sorts of other memorabilia on the train including even special glasses to keep the soot out of your eyes. I was the foolish one who forgot their sunglasses so I got the occasional bit of junk in my eyes along the ride. At Rockwood the train turns to the east, leaves CO-550 and heads into the mountains more. It was also past there that we lost decent cell coverage. Along the way Denny and I tried out some of the Hebrew national hot dogs and they were fantastic; some of the thickest dogs I've ever had and also had a nice wheat bun. 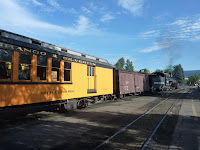 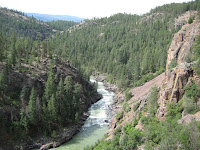 The ride takes us past the Soaring Adventures camp where a man showed us the zip-line between trees as we rode by. After that the train route heads into the canyon and the views become even more impressive. About 11:15am we started getting prepped for the Needleton stop which was only 30 minutes away. We wanted to be close to ready to hike when we departed the train to get us up to the Basin early. On the train we met a nice family of a father, 3 of his kids, and a wife of the oldest son. They had some questions about the Basin and the 14er hikes as they seemed relatively new at this.
At Needleton the train was pretty much on time and 17 of us got off the train and mutually helped unload all the backpacks from the red car. 2 men on the train were headed north towards Pigeon Peak to hike the other 15 would be headed for Chicago Basin. There were about 4 people who left ahead of us and we made our way on the trail within 10 minutes of the train arriving.

At the stop for the wilderness sign we read some of the bulletins and two relatively out of shape guys caught up to us there as we were leaving. About a mile or so past there we caught up to two more hikers who were ahead. After the junction with the drainage water from New York basin we past the last 2 hikers ahead of us. Around 3pm we were the first to arrive in Chicago Basin at just shy of 11,000 ft. We found some campers in the woods there and also met our first mountain goats. 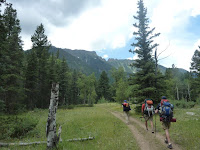 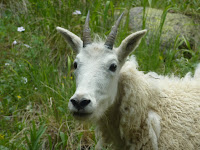 We dropped packs at one of the first clearings and the other three spent about 10 minutes hunting down a good campsite. They ended up going back up trail a hundred feet or so from the clearing and found a use trail leading down into the trees with a great site that sat at about 10,920ft. It was close enough to the river and far enough off trail to provide nearly the perfect site (it also had big logs for seating!).
We set up camp with my four-person REI Half Dome 4 tent and with David's REI Half Dome 2 tent. Yes, our camp was almost like a small REI store. We saw a few other hiking groups pass by above us on trail but were most pleased to have arrived early to grab this site.

Around 4:30 we set out on the trail to explore further up Chicago Basin. It was also going to be a water filtering trip somewhere along Needle Creek. We hiked the 0.94 miles up trail to the Junction sign for Twin Lakes and Columbine Pass. We enjoyed the views out in the basin and talked to some hikers passing by. One gave us a funny look and a harsh comment saying how we'd really need to have boots because of the snow above. He must have seen Denny's trail-runners. We took his second-guessing for awhile and then I slipped into the conversation how we'd been up Little Bear and suddenly the tables were turned and they started asking the questions on that and were impressed with our previous hikes.

We made our way back to camp filtering water near the river on the way. Cooked us some dinner, freeze-dried beef stew and lasagna. We were surprised how well the temps held that evening and sat on a log at camp til about 9p when we finally hit the tents. 4am was the intended wakeup time in the morning to go for Sunlight and Windom.

Our July 21st hiking began with an early morning ascent of Mt. Eolus. You can read all about that in the Eolus/North Eolus Trip Report:


When we returned from the Eolus climb it was around 10:30am. We were surprisingly ahead of schedule and had time to spare while breaking camp and hiking out. When we were summiting Eolus aruond 7:30 or so we were worried that the hike to North Eolus and the descent would have us at camp around noon. Arriving early at camp gave us the better part of an hour plus to pack up gear, rest a bit, and enjoy our last moments in Chicago Basin

We shared our climbing stories with Matt and Denny as we broke down camp. Denny was kind enough to have already started working on sleeping bags and mattress pads for us. We had our big packs and all ready just after 11:30 and were on the trail to Needleton by 11:40. Not much of a break after the Eolus hike but we were glad to keep the legs a-going.

The hike down to Needleton was about as gruesome as we anticipated. After several full days of hiking, and with 40 lbs on the back, it was a long 6 miles down to the bottom. As we watched the clock go by we were surprised to find we really weren't making much better time than we had on the ascent. 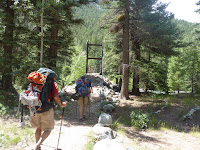 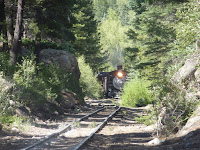 We arrived at Needleton about 2:50pm. We thought of catching a supposed 3:15p train but apparently we read the schedule wrong. A train went by at 3:05p and did not stop. We ended up having to wait for the 4p train as we were ticketed for. We were intrigued as we waited by watching a rafting group stop at Needleton and packed up their rafts to be put on a later train.


See video of the 400p to Durango Approaching at Needleton

See video of the train shooting steam off a bridge

The train was just a few minutes late and we boarded, glad to have a nice seat to sit down on. We spent much of the return ride on the train enjoying the hot dogs and a good drink. We tried several of the Durango micro-brew beers on the way back. As we exited the canyon area of the trip and neared the return to Rockwood we were especially taken with the scenery (and the sheer drop-offs off the side of the track!)
We were back to Durango around 6:30pm. David went inside to inquire about military discount and was blessed by the train folk to have been given a wonderfully substantial discount. We made our way back to the car and decided to head for Frisco. The long hiking days in Chicago Basin were enough for us and the planned ascent of Mt. Sneffels the next day would have to wait til another year. 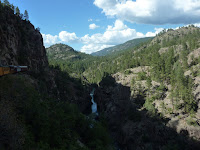 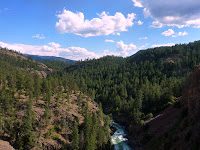 My track for the ascent to Chicago Basin was taken on my Moto Droid with BackCountry Navigator, however, the app had a glitch and did not properly record the track so it was lost. On the descent I used my Nokia N800 with a bluetooth GPS and this took a good track which I have for download here. I've also included several waypoints including Needleton, our camp, and several peaks in the KML file:

If you would like to see all of our Chicago Basin photos you can click the photo below and it links to my Google Photos Album: 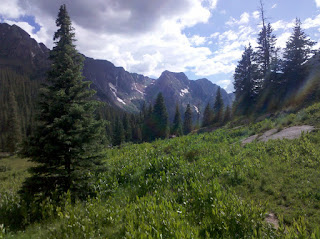