We arrived at Glacier Point around noon and the lots were already filling up and we were lucky to find a good spot in the row by the bathrooms. We hopped out and went for photos right away. The legs were still pretty tight and downhills on steps was painful still. There was a bride and wedding party also heading up towards Glacier Point as we arrived. We got some amazing shots out at the Point and then headed to the car to situate our gear for hiking. We had originally contemplated doing the GP > Sentinel Dome > Taft Point loop today but I wasn't too keen anymore on more snow hiking and navigation. So we decided to start with Sentinel Dome and see what we felt like. There was good signage from the parking lots for the main trailhead that serves the Pohono Trail and Panorama Trail. We started on the Pohono towards Sentinel Dome. 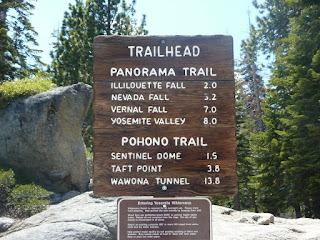 The first bit of the Pohono actually crosses the road twice as it climbs and then heads for the west. There were patches of snow to cross but a good 80-90% of the trail was drying out. We made quick work of the trail towards the Sentinel Dome junction and my legs were starting to feel much better. I realized my head just wasn't into it all morning but as we got out hiking everything came around. The junction for Sentinel Dome was somewhat clear as we could also see the radio tower at this point.
From this point on it was all snow on the Sentinel Dome trail. I put on microspikes though I would find these weren't necessary. The snow was already getting soft and slushy on the top. There were a ton of foot trails in the snow and as we neared the summit of Sentinel Dome it looked like a sledding hill with foot prints everywhere. We had about 20 people on top with us and the views were some of the best of the trip next to those from Clouds Rest. There were a few gentleman on top trying to debate whether Half Dome or Sentinel Dome was higher. They were trying to eye-ball this and one was trying to text Google 411 for the answer. I pulled out the topo map and settled that question. 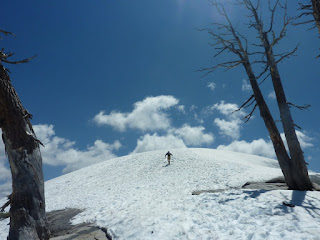 We opted on the Sentinel Dome summit not to purse Taft Point in the snow and rather to hit the Panorama Trail and at least hike down to Illilouette Falls. We knew that was snow free and the views would likely be better as well. The hike down Sentinel Dome back to Glacier Point went quickly. We actually had a great run step-sliding down the snow off Sentinel Dome. A little harder and it would have made an awesome glissade. We made it back to the parking lot and spent 10 minutes changing some gear out for the next hike.

To start on the Panorama Trail we went back to the same trailhead we had just started at, only this time, we made the left turn from Glacier Point. The sign said 2 miles to Illilouette Falls and that was our destination. I had also done some research on the topo and concluded that to continue to Panorama Point was only another half mile and if time allowed we would shoot for that as well. 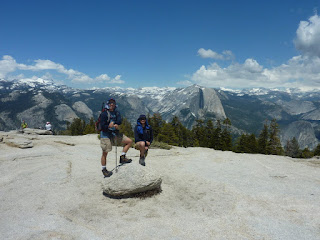 The Panorama Trail begins with a switchback or two to drop the trail from Glacier Point. The forest was beautiful at this point as it consisted of some very large pines (with a great smell) and very little underbrush keeping the views somewhat open. After the initial descent the trail becomes one big panoramic traverse heading down towards Illilouette Creek. Along the way we saw Half Dome turning before our eyes and the view went from seeing the vertical sheer north face to the more rounded south side. As we neared Illilouette Creek the trail began several switchbacks to help us on the descent to the creek. We figured we had gone at least a mile at this point though the sign said 1.3 miles to go to the creek. We concluded that the mileage on their signs isn't always 100% accurate. 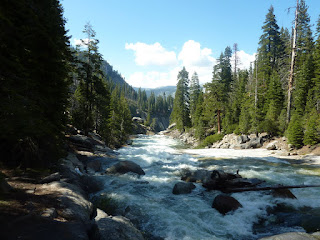 At Illilouette Creek we hit the footbridge taking you over the rushing waters. The trail never actually took us to the top of the falls and our best view of the falls happened along the switchbacks previously. We moved on to Panorama Point and then involved several more climbing switchbacks which easily took us another half mile past the creek. At one bend in the switchback there was an obvious trail breaking off through the willows and we took this out to the point. As required at Panorama Point, we took some great panoramic photos. Good views of Glacier Point, North Dome, and Half Dome as well as part of the valley altogether. 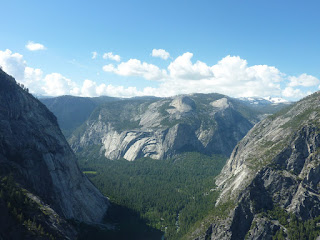 We decided to really push it on the ascent back up to Glacier Point. The thought of catching the snack shop open still was enticing to get some more drinks. We pushed it as quick an ascent speed as we could keep up with. Had only one stop to handle some drinks and otherwise made a fantastic pace back up to Glacier Point. We made it with time to spare and headed into the snack shop for Gatorade and an ice cream sandwich. We let the legs cool some and headed out to the end of Glacier Point one more time. We figured we still had some good time before we had to hit Inspiration Point. It was nice to have 15 minutes to cool down and chug the Gatorade.
The drive out from Glacier Point went smoothly and before we knew it we were at the end of the Wawona Tunnel. We allowed for some short debate as to whether we had the energy left for this hike and whether the legs would tighten up too much after Glacier Point, but when we hit the Tunnel View parking there was no debate, we were juiced to go. Matt noted that it took him about 45 minutes to get to Inspiration Point the other day so we counted the minutes we had before dark and felt pretty good about this.

We hit the trail cruising. There were a few great views of Yosemite Valley from the lower parts of the trail. It was otherwise an ascent through thick trees with the earlier parts of the trail being relatively steep. As we hit Inspiration Point we were surprised at the lack of view. There was an open flat area with trees blocking any decent view of Yosemite Valley. As I read later on, I hear there may have been a great viewpoint on a short walk out of the trees in this area but we never saw it. We hit the descent hard and by now I was completely out of liquids. It took us 29 minutes on the ascent and we moved so quickly on the descent we did the 1.3 miles in 21 minutes and our hiking was done. 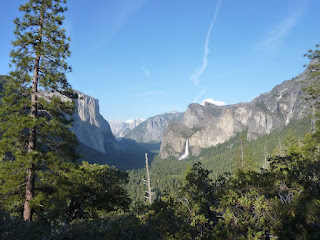 The track and a handful of waypoints from these three hikes are available for download in the following KML file:

If you would like to see all of my photos from this hike you can click the photo below and it links to my Google Photos Album: 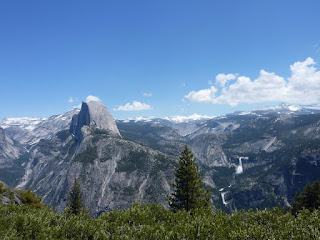