We were up pretty early this morning for the hike and pleased to see the weather was good and the skies clear. We made it up around 5am and got the stove going to boil water. Had a nice breakfast of oatmeal and hot chocolate. After getting our gear together we were on the trail at 5:48am. It was relatively easy to trek out of the campground in Little Yosemite Valley and to pick up the John Muir Trail heading north. The first several hundred feet on the trail were fairly wet and muddy still with the water draining right on the trail instead of off it. We headed up about a mile and a good 800 feet until we hit the junction with the Half Dome trail. At this junction its basically a left turn to Half Dome and a right turn to stay on the John Muir Trail and head for the Clouds Rest Trail. 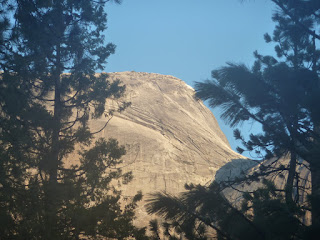 It was another quarter mile walk, much less wooded, to the junction with the Clouds Rest Trail where we headed up. Thus far, we hadn't seen anyone on the trail and we were pretty sure to be the first out this morning. The Clouds Rest trail ascended pretty rapidly for the first 800 feet of elevation. Past 8000 feet it starts switchbacking up to the base of a 9400 foot point that marks the southern tip of Clouds Rests summit ridge. Along the way we started to see small patches of snow, a few even we'd take a step or two to get through on the trail. When the trail hit the base of the point at 8700 feet, it makes one long traverse to gain the bowl marking the southern approach to Clouds Rest.
As we were about to clear to the east side of the 9400 ft point, we were at elevation 8900 now, the snow finally kicked in full force. We were stopped at a section where the snow completely covered trail for all the foreseeable future. It was also on a pretty good slope and, being quite early still, it was hard and icy. I started to traverse about 50 feet on just my trail-runners until I got to a point where it didn't feel comfortable anymore. I had a dirt landing about 10 feet below me on the slope so I tried to do a slow, controlled slide. Well that was nearly a mistake as I slid fast and almost out of control, luckily I caught enough of the willow bush that was on the dirt landing and stopped myself. It was here that we decided we needed traction. I put on my microspikes for the first time and Matt went for his yaktrax. I hopped on the icy snow again with the microspikes and I was instantly in love. I felt perfect comfortable traction suddenly and began to work my way up and across the snowy slope.
The track we were on flattened out in an open area where we could start to take in the views. It was here was also got the confirmation that we were in snow the rest of the way. We picked up the sun here and the snow above us was already softening some. We were pleased to find out though that only the top 2-3 inches was softening and whatever was below it remained firm. 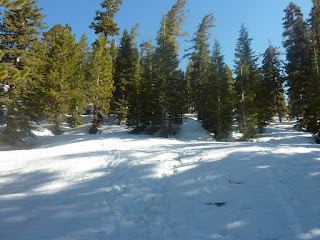 Past this point there was no longer any trail, it was just us and the snow heading ever upwards. I started checking my GPS for a spot locations and then pulled out the compass to make sure we kept bearing towards the summit. It was actually difficult to spot the summit and when we looked up we were only seeing portions of the southern summit ridge. We were tracking just above where the actual trail was supposed to be located. The snow conditions proved to be great for hiking through. It was never so steep we were unsafe and the traction was good enough to keep us moving. And there was no postholing to be had. We eventually topped out at the summit ridge about 600 feet from the true summit. It was here there was a notch in the rocks on the ridge that when we walked up to it provided amazing views of Tenaya Canyon. We were also shocked to look to the northeast and see what the snowy high-country looked like. 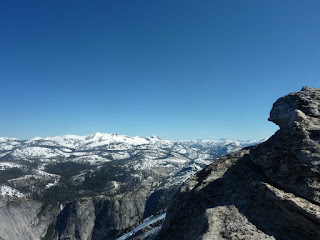 From that view we hiked another 200 feet or so to the base of the steps leading up to the summit. The first 20 steps or so were clear of snow, but then a large snow patch covered the next section of steps as they rounded the corner. We hugged the bushes on the side of the trail in an attempt to make it around the snow. This got us up another 20 feet. We were then able to cut across the top of the snow patch to get to the remaining steps which were snow-free. This led us to the summit which was snow free for the most part. There was a large snow patch at the actual highest elevation but plenty of rocks below it to drop packs on and sit. The views ... were just incredible. Jaw-dropping! So many great pictures to be had we didn't even know where to begin. We took summit panoramas and used a mini-tripod to shoot some of ourselves. After we'd been up there 20 minutes another guy joined us up there. He had been backpacking somewhere near the Clouds Rest-John Muir Trail junction. We enjoyed a good 30 mins up top and even a phone conversation back home before beginning the trek down. 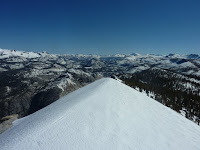 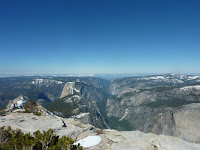 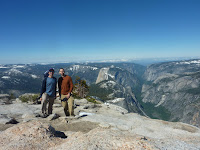 As we descended the steps from Clouds Rest I decided to try the microspikes again on the snow that covered the mid-section of the steps. Once again, I was in love, I used the spikes and some support from my trekking poles to walk straight down the snowfield to the flatter snow below. Once we reached the snow at the summit ridge and below it was smooth sailing. We were kick-sliding and almost jogging at points down sections of the snow. We were making great time and were navigating a straight bee-line to the corner we had to turn around 8900 feet to get us to the south side of the 9400 ft. Point. We did indeed end up shortcutting some of the final traverse on the descent and ended up dropping in right where the icy snow had started this morning. We stashed our snowgear and were on trail the rest of the way down. We were treated to occasional views on the switchbacks of Half Dome and the other peaks in the area such as Mt. Starr King and Clark Peak. At about 8700 feet we were at a switchback and decided to follow it out onto the rocks to the west. If we followed this out it would lead to the Quarter Domes on the connecting ridge to Half Dome. We only explored a hundred feet out or so and then continued on the descent. We were taking a look at time to see if we'd have minutes left in the day to complete the full agenda, and so far we were doing good. 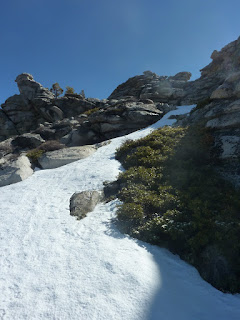 The descent down the Clouds Rest Trail went smoothly and after we hit the John Muir Trail we started seeing other hikers. We ran into a group of guys on the JMT that were heading for Clouds Rest. We had them quite surprised to be already on our way down and it was only about 11:15am. We gave them updates on the snow conditions and a little encouragement. After passing the Half Dome junction we ran into a lot more hikers on their way up. We knew many of them were heading to Half Dome even with the cables down. This had been a contemplation of ours as there was reason to think it was reasonably safe with cables down.
We made it back to Little Yosemite valley right around noon with sunny skies and hopefully a dry tent. We spent 45 minutes tearing down the tent and re-packing our gear for the hike out. It was also a good time for a little snack to re-fuel with. We bid our farewell to Little Yosemite at 12:45pm and headed back down the John Muir Trail. We made quick work to Nevada Falls where we found quite a large number of people this time. And from that point on we would be constantly surrounded by day-hikers and tourists and the like. Just before the JMT junction with the Panorama Trail we crossed over a small stream and as we did so we spotted a deer no more than 15 feet away also standing in the stream watching us. He gave us enough time to snap a few shots and then finally scampered off.
The John Muir Trail past the Panorama junction is quite exciting for the first several hundred feet. It is like a shelf on the side of the mountain with a nice rock railing on the side to make you feel safe. It was also like a shower walking through parts of this as water was streaming off the side of the mountain above us and on us for 50 feet or so. We were able to hug the face of the rock and avoid most of the falling water. 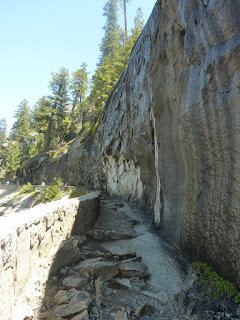 Past this initial shelf section the JMT continues with many many switchbacks as it descends and the views remained quite good. The JMT offered the best views of Nevada Falls that we had seen as of yet. We were intrigued by all the groups of kids we past on the descent which were being led by rangers. At 2:20pm we finally hit the rest area by the bridge below Vernal Falls. This is where the John Muir Trail meets up with the Mist Trail and they have some toilets as well as water fountains to enjoy there. We re-filled all our water here as planned and then continued on. As we hiked out on the paved sections of the Mist Trail we were starting to miss the softer dirt trail. It was a pleasant sight when we finally hit the Happy Isles Bridge and we knew it wasn't much further to the car. We hit the Trailhead Parking lot at 3pm, right on schedule.
We both started to rest there at the car and fiddled with our gear some. Because of a few blisters starting and the long hikes both past us and ahead of us we opted not to head to the Snow Creek Falls trail this evening. It would mean losing a night in the backcountry but would also mean doing all the mileage tomorrow with much lighter packs on (a decision we would be praising tomorrow!).

My track for this hike was taken with my Nokia N800 tablet using a Nokia bluetooth GPS. The GPS tracked well the entire hike this day. You can see the variations near Clouds Rest summit of our ascent and descent routes. My downloadable KML contains our Ascent of Clouds Rest, Descent of Clouds Rest, and the descent of the John Muir Trail to Nevada Falls and then Yosemite Valley. 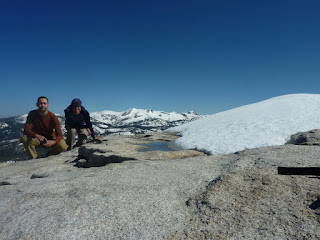