My hiking trek for Yosemite began from This was the viewpoint I remembered from last time that gives you a great look at Bridalveil Falls and beyond. The drive into the valley was fantastic and I was trying to lean out the window for the looks at El Capitan and other sights. 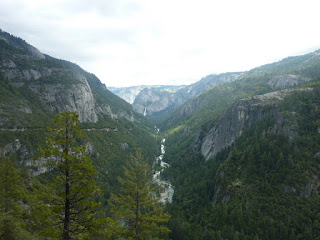 Hodgdon Meadows which was "basecamp" for the week. I had just made it in to camp from a flight into Oakland and worked quickly to get my gear ready for the hike. We headed out just after 3p for the valley and I was stoked for my first views of Yosemite in 3 years. Matt offered to drive so I could take in all the views and so when we hit the first viewpoint near the tunnels on CA-120 we made a stop for photos and driver swap.

We made it to Curry Village and then on to the turn-off for the overnight hiker's parking lot. This area is somewhat confusing in that it says no entry on this road which is true as there is no thru driving to Happy Isles and beyond in this loop. However, cars heading for the hiker's parking lot can proceed on to that which we did.

In the lot we grabbed the food from the car and threw it in the public bear lockers at the lot (which is required by law) and got the gear ready for the hike up the Mist Trail to Little Yosemite. We were packing for a night leaving the remaining gear to grab as needed for the next night in the car.

We were on the "trail" just after 4pm heading for Happy Isles. It was about 1/2 to 3/4 of a mile from the lot to the Happy Isles trailhead for the Mist Trail. Its clearly marked and easy walking along the road to get there. It is also an option to grab the shuttle bus at stop #15 which is the Upper Pines Campground and only a brief walk from the Trailhead Parking. 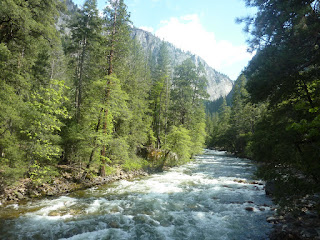 The excitement was now all there to have been waiting for this hiking for nearly seven months and finally be ready to dive into it. Hitting the Happy Isles bridge and then the trail which is like a highway for a few hundred feet after the trailhead. The ascent up to the footbridge below Vernal Falls was all paved with some great views towards Glacier Point and Ilillouette Falls. We ran into quite a handful of people coming down and passed just a few heading up. At the footbridge below Vernal Falls we grabbed some water from the fountains and continued on where the trail is no longer paved but in great condition. The trail climbed progressively up towards the falls and as you round the corner below the Falls the mist finally picked up. 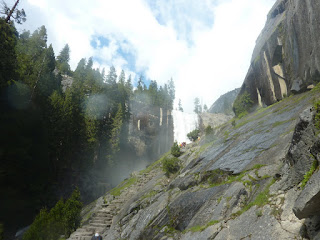 We donned our rain gear and we learned just how aptly named this trail is as the mist got us quite wet. The trail here was rock steps and it swings around the southeast side of the falls. There is even a section which is a narrow ledge walk with railings installed for safety that take you up to the top of Vernal Falls. At the falls there are great rock slabs to walk on towards the falls where there are more railings to keep people away from the dangerous waters.

Above the Falls the trail swung around Emerald Pool and another footbridge takes you to the north side of the Merced River and winds around towards Nevada Falls. The ascent to Nevada Falls takes place in a narrow gully on the north side of the falls where some amazing trailwork winds up through several small switchbacks made purely out of rock to the top of the falls. It was literally a rock staircase climbing its way gently through the elevation. At the top of the ascent we weren't actually at the falls. You actually find yourself at a major trail junction with the John Muir Trail heading north toward Little Yosemite Valley and the John Muir Trail heading south toward Nevada Falls and beyond. We headed several hundred feet down trail to the top of the Falls as we had some time to give. The views from here were not surprisingly wonderful though we did take note of the darker clouds starting to roll in strong around us.

We headed on towards Little Yosemite Valley and found this hiking to be quite pleasant with little elevation change. As we neared the Valley we had a surprise waiting for us along the trail. We suddenly spotted a relatively small-sized deer trotting along at a little over half speed across the trail and through the fairly thin tree cover to our south. Not more than 4 seconds after we spotted a coyote trotting along after him. I was startled at first thinking "That isn't a wolf, is it? Nah, there are no wolves in Yosemite, right? And its small. Must be a coyote." About 30 seconds later we spotted another coyote running along at half speed across the trail in front of us. Tried to get the camera out in time to snap him but he didn't stick around near us for long.

The backpacker's camp came along not after our fun with the wildlife. It was a quick right turn off the trail to the bathrooms and then the stroll past the large logs into the camp. 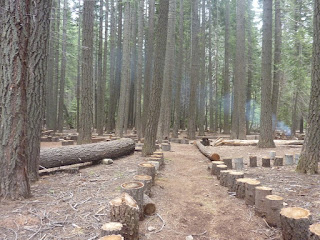 We walked around in there for awhile getting our bearings and checking out the "sites" until settling upon one near the north end which would be closer to our morning hike. It was right then that the sprinkles from above began and we started working quickly to get the tent up. Luckily I had set that model of tent up several times before and we knew pretty well what we were doing. We got the tent going but got fairly wet and cold in the process. We also were wanting some supper but decided to see if the rain would stop or we could dry and warm before having to cook.

By 8pm I got tired of waiting on the rain, not to mention, being in the midst of this tall grove of trees it was near impossible to tell if it had stopped raining because of the drip from the trees themselves. We got the stove going and boiled our water with the sprinkles still coming down. The freeze-dried chicken teriyaki was fantastic. It may have been what they call "camper's syndrome" that the food tasted so good, or maybe it was just that sweet, but we were satisfied. After supper we made the walk down to the river for water and found that with all the various social trails running around there it was actually a challenge to find the right one to the river. We bushwhacked our way to a fine spot to fill up water and then headed back to camp. On our return we found a group around the community fire ring chatting and staying warm so we stopped in to enjoy the warmth. Had some great talks and sharing of trail and cooking information while we got sensitivity and feeling back in our fingers. Several of the folks there were going to give, or had given, Half Dome a try with the cables down. We were the only group headed for Clouds Rest.

We spent a nice 45 minutes at the fire with our fellow campers before heading to our camp, without flashlights, oops. It was quite dark trying to find the tent but we made it. Were probably asleep by 10pm this night to get ready for Clouds Rest in the morning.

My track for this hike was taken with my Nokia N800 tablet using a Nokia bluetooth GPS. In the lower sections of the trail the GPS did not track well. 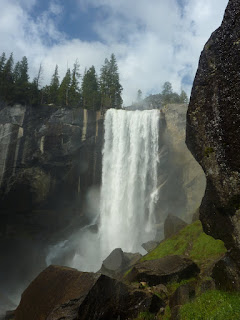