Our ascent of North Star began as a simple family hike up the road west from Hoosier Pass. My brother David and I had packed just in case we'd go for the summit but weren't necessarily guaranteeing it. When we hit the saddle at the top of the loop hike the others were planning for lunch and the conditions were right for us to go for the summit so we set off. 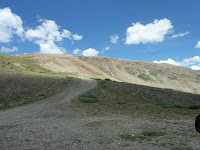 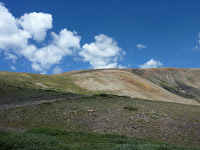 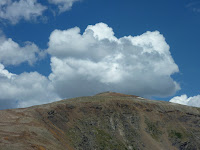 We started up the road by the gate above the saddle. Immediately we noticed 4x4 tracks heading straight up the slope and we decided this would be a good place to start. As we went up the first few hundred feet there was some semblance of trail. As we ascended further we found it difficult to stay on any given trail. There were meandering road tracks from mining activity of old. It was moderately-time consuming trying to scout out good paths up the long slope. As we began to near the top of the slope and the first main point on the ridge was within reach we were quickly thinking it would be great to swing around the side of that point and not have to summit it. Sure enough a great trail appeared that did just that. It took us around the side of the first main point, and it was a great trail, and brought us to a saddle on the west side of that point.
From the saddle on it was all ridge running. We also noticed there were some dark clouds out in the west that were forming so from this point we kept a very close eye on the weather. At first we did some of the ridge running just onto the south side of the ridge crest. As we proceeded further along the ridge we kept getting amazed at how long this ridge was. David had been hopeful at first that the first main hump on the ridge was the true summit, as many topo maps will falsely claim, but I pointed out to him the taller hump almost a mile down the ridge that was the true summit. The scrambling was through talus with the occasional break of a dirt trail. The clouds were getting larger and darker in the west but they were not coming any closer to us so we decided to proceed. We each had a few moments of wondering in our heads if we ought turn back but the honest truth was we never had a moment on this hike where we weren't standing in the sun.

Finally we made it over the last hump before the summit ridge. There were a few narrow sections along the ridge and a few very brief sections that one could classify as difficult class 2. It was 1:19pm when we finally summited and we had already decided to make it quick. We took enough time for a few photos and video, a quick Powerbar grab, and a change of a phone battery for GPS and we were on our way down. On the return trip we worked to stay on the ridge crest the entire way. This was actually kinda fun and the rock was solid for a handful of good moments of scrambling. There were only 2 or 3 moderate exposure points. When we made it back to the ridge saddle we proceeded to make real quick work of the good trail that traverses around the first great hump on the ridge.


As we descended further we worked to follow the trail closely as we could and indeed it stayed pretty clear to follow. It eventually worked its way over to the old mining road and with a few short switchbacks deposited us onto the road. This worked out as we had been looking for a way to descend to that road anyways instead of hunting for trails on the open slope. The road took us back to the saddle with the gate and this road was the slightly upper road that was gated. At the big saddle we decided to descend to the north on the half of the loop we had not done before. This at first appeared to be a very old, and steep, road. It narrowed as we descended further. Nearing the bottom of that slope we could spot the other road nearing. We saw a shortcut through the willows as we neared the intersection and it put us onto the road. The road hike back out to Hoosier Pass was a little longer than expected and may put this half of the loop slightly longer than the other half. The views of Quandary and the surrounding area made it well worth it.

We made it back to the Explorer which had been left for us at just shy of 3:30pm. The others had been concerned that we'd get rained on because of the imposing storms and we ended up staying dry and in the sun the entire hike. Ironically, it was the others who headed on to Breckenridge that would have the rains find them. Glad to finally have summitted North Star. Have contemplated this on two different winter trips, though I am glad we didn't try it. The narrow summit ridge would be precarious with snow and hidden cornices. Makes for a great summer hike if the weather cooperates.

This track was taken with the BackCountry Navigator app on my Droid Bionic. It follows our entire route up from Hoosier Pass to the summit. You can see some of the variation between our ascent and descent routes.

You can see all of my photos in my Google Photos Album. Just click the photo below: 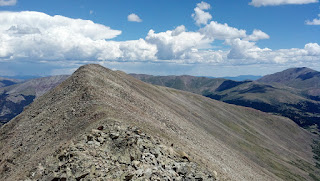