We met Ken, Cindy, Katelyn, Matthew at 5:50am at US285 and County Rd 18 just south of Fairplay. Our hiking group was Luke, myself, Dad, and David. We drove the road into Fourmile Creek which was incredibly bumpy. We made it up to the gate at 12000 ft. which was open for some reason. We were the first car parked up at the gate. Got our entire hiking group ready to roll and it was just past 6:45am to start. We were all winded to start, and I reasoned this must be because of our 12K starting elevation. The kids were all looking good and ready to roll. 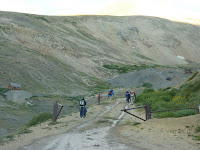 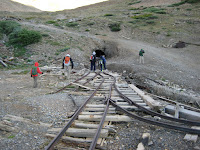 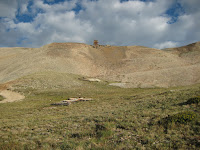 As expected there was a growing number of people showing up and starting on trail after us. We were also concerned with weather as their was a chance of rain forecasted for 9am and beyond. So far so good with the clouds. The road was pretty easy to follow despite the occasional off-shooting road or trail. I was aware from the topos of two alternate routes, one which follows an old mining road to the saddle in the middle between Sheridan and Sherman. The main route follows trail and road up to the saddle near the Sherman side. We followed this. There was the occasional shortcutting trail which seemed to be present from folks who would shortcut the switchbacks in the road. As we travelled most of our group enjoying quick side-ventures to check out the old mining equipment.

When we past the last bits of the Hilltop mine we had a clear shot to the saddle from there. David and I got the go ahead from Denny to make our run for Sheridan at this time while the weather and everyone else were still doing go. So we turned on the jets and made a quick dash up to the saddle making a quick left turn on the first trail we saw to head over to Sheridan. The trail in this very long saddle was good but quickly turned to small talus as we began to ascend Sheridan. There was no perfectly clear trail up Sheridan as we had expected but the segments through the talus rock were just clear enough we mostly figured we had a route. Our high pace, coupled with the big hiking the day before, had us winded a bit and slowing down as we reached Sheridan's summit. The summit we hit first seemed like it was the true summit, and the topos would back us up, but we found no trail register up there. We saw another hump, practically same height and only perhaps 100 feet away with a large rock shelter and so we hopped over there quickly too just to make sure. 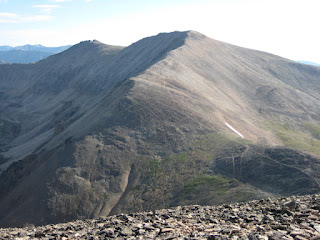 We couldn't tell where the others were at yet, though they tell us they saw us over on Sheridan. So we didn't spend long up there and made our way down. Again on the descent we did our best to find what we could of a trail through the rocks. As we neared the saddle we could see a trail running along the back side of the saddle which made for a quick highway over to the Sherman ridge. From afar we could see a sweeping trail running up to the left side of the ridge, but as we neared we noticed everyone running up a smaller, steeper set of switchbacks which ascended the right side of the ridge. After a couple hundred feet of ascending we here we caught up with the rest of the group finally.

As we ascended further on Sherman's ridge we had memories returning of the awful winds we had up here 20 years ago. We were also reminded of running trail on the crest of the ridge itself. There is now a trail cut into the right side of the ridge as you ascend which makes for fairly easy going. As the ridge began to top out it also began to get thinner. We put an adult next to each of the younger kids here just to make sure they didn't do anything unexpected. I wouldn't call it exposure so much yet through here, but one drastically catastrophic mistake could send a hiker rolling down the sides of the ridge for a good distance. 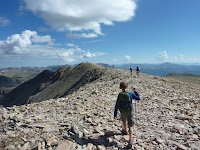 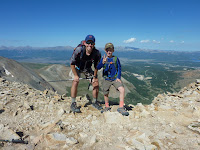 When the trail along the ridge finally levels out you think you've hit the summit but it is actually another 200 feet or so of level hiking on top to get to the true top. I grabbed video of Luke getting to this area and through some of it. David also then grabbed video of Luke as well as the others finally hitting the true summit. There was a large snowpatch just off the summit itself which the others would play in for a few moments. I am told by Denny that Luke actually slipped and slid on it for a few it before stopping himself. David and I stuck around with the others for a few photos and David even got snagged by another group to shoot their photo, and then we set off for a quick run to Gemini Peak. 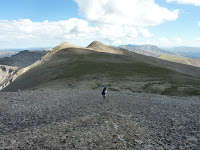 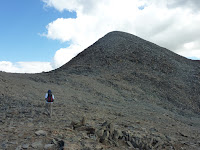 Its a quick and fairly easy descent off Sherman to a long, broad, slightly rocky meadow heading over to Gemini. We ran into another pair of hikers coming back from Gemini as we trotted over. We traversed slightly around the lower Gemini summit to a small saddle between the two. The actual peak seemed like a hundred foot high pile of rock. It was actually somewhat steep running up the short rocky stretch to the summit, something I would actually classify as class 2+ in the direct route we took to the top. Took us about 20 minutes of swift movement to get over there from Sherman. We spent only a minute or so on top and then made a bee-line back to Sherman to join the others. Took another 20 minutes or so to get back and as we did we could see the large dark cloud forming over us to the east. When we re-summitted Sherman we found the others had left so we kept moving at a good pace. We caught up with them a few hundred feet down the ridge and worked with the youngins' again at keeping them safe on the narrow ridge.

The group as a whole did very well on the descent. A few small slips and slides on the steep scree and dirt but no major injury. We enjoyed working with Ken's group and helping them learn about hiking in the mountains, especially at high elevation. After doing this for 21 years now we have found we've learned an awful lot. At age 7 this year Luke is doing far better on hiking these mountains than David and I were doing in our lower teens because of the preparedness and good technique we've learned through the years.

Our exploring of the mining stuff was very little on the descent as most of the group was focused on reaching the vehicles before the big, dark, thundery cloud opened up on us. We were surprised to see a few groups still heading up towards the summit with the approaching storm. Though as we heard more thunder we're pretty sure we could see a few of them bailing up on the summit ridge. 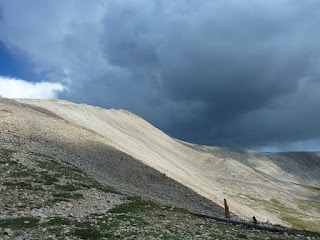 We made it back to the vehicles still dry and feeling great. Ken's group was very excited at this wonderful accomplishment and for still feeling pretty good physically. Luke had a fantastic third 14er and will surely be ready for more next summer. Somehow the drive out on the Fourmile Creek road didn't seem quite so bumpy as the drive in, but we were still glad to hit pavement back in Fairplay.

The photos we took on this hike are in this slideshow or you could click through to see them on Picasa: 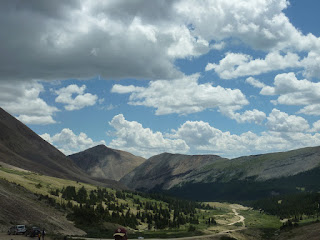