It was the All Pastors Conference again that brought me up to Northern Michigan. Last year it gave me great opportunity to find some hiking at Boyne Mountain as well as a quick afternoon on Mackinac. This year several days were all at Mackinac Island. Conveniently, they gave us Monday morning as free time and encouraged all to take a "prayer walk". So I did. I had a breakfast in my room at Mission Point Resort and then headed out just as sunrise was hitting the island.

From the Straits Lodge of Mission Point I took the first road up the hill and hit Huron Dr heading East. Not long after the road entered the trees a fairly clear signed trail for Manitou Trail appeared. A very steep and rocky portion greeted me before long. With an angling turn at the bottom of this slope it left little runout and would make descending on a bike very difficult. Ascending on a bike looked nearly impossible as well. Hiking was just fun. About a tench of a mile along the trail and you reach an opening (which when seen from below is a rock outcropping). The views of the just risen sun and the straits of Mackinac were fantastic. 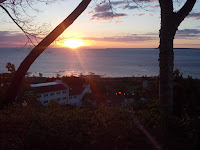 From there the trail pretty much hugs the edge of the bluff. It was beautiful hiking in the woods with a bit of a chill in the air. It wasn't long and I met the trail from the bike path below heading up to Arch Rock. I had hiked this wooden staircase up to the Arch Rock viewing last year. This year it was under construction and no passage up and down the stairs allowed. I had the Arch Rock area to myself. I took a few pictures and hopped on the steel walkway that goes out to the actual arch. This would be a harrowing exposed sort of climb to traverse the arch. For me it brought to mind visions of crawling along the knife edge on Capitol Peak someday.

From the Arch Rock area you have to hike up the wooden stairs to Nicolet Watch Tower. At the Watch Tower you can easily pickup the Tranquil Bluffs Trail and sign. After this I was on the Tranquil Bluffs trail for pretty much its entire length. For the most part this classic trail was easy to follow. What few points the trail nearly lost itself in the woods it was easy to regain by the simple rule "follow the edge of the bluff". There were also two sections through here where the trail joined up next to the road which is called Leslie Ave. At these points you had to be watch for where the trail would again leave the road. Along this length of trail were several overlooks with great views out into Lake Huron. There were also several trail junctions with the intersecting trails marked. The ups and downs through here were fairly minimal and it made for great hiking.

When the Tranquil Bluffs Trail finally intersected the British Landing Nature Center Trail I made the turn onto this new trail so as to have a chance to head down to the water. The nature trail was heavily covered with leaves and may have been hard to follow if not for the occasional sign pointing out the name of a tree. Early on this trail there was a large signed rock called "Friendship Altar." It wasn't long and I was at the beach and taking in the great views of Mackinac Bridge from British Landing. It was quite a bit chillier along the water and out from the cover of the woods. I took what pictures I wanted and found the 3G signal to be solid enough to share a picture on twitter. I worked with the map for a bit to determine where to proceed next. I wanted to hit the Crack-in-the-Island area and I knew that the Partridge Trail would be a good approach for this. The best way to gain that was to run the Lake Shore Rd. Bike Path to gain the Forest Road.

The Forest Road climbs and then turns to the southwest. Its not long and the sign for the Partridge Trail was easily found. The Partridge trail was an easy to follow single track trail that meandered through the woods. It was mostly flat with heavy vegetation on both sides. It intersects a very wide trail, practically a road, at one point just before getting to the Cave in the Woods.
The Cave in the Woods was well named. It was a shallow cave, about 3-4 feet high at its mouth and was no more than 10 feet deep. I took video for the boys back home to see. At the cave there is a sign just around the corner directing the way to Crack in the Island which wasn't more than a hundred feet away. At first the Crack doesn't look like much but it is about a 30 foot long, no more than two foot wide crack. A sign there helps explain how experts think the crack formed. I tried to work my way through the crack. As it narrowed in the middle I had to take my pack off in order to squeeze through the length of it. This happens to be pretty much right next to the airport.


Video exploring Cave in the Woods

Video of my crawl through the Crack in the Island
I hiked the Crack-in-the-Island trail out to the State Road and then followed the road out to the main British Landing Road. This road worked its way past the clubhouse for the golf course as well as heading past the end of the airport. Shortly after this I made a left onto Crooked Tree Rd. The next objective was to find the back way up to Ft. Holmes. The Crooked Tree Rd. would be one for great biking. I found the clear sign for the Juniper Trail and headed off in that direction. I was on the Juniper Trail for about 500 ft. and then made a right onto the Cliffview Trail. This was well named as it worked its way below a "Cliff" which was the northern end of the hill that Fort Holmes sits upon. About 500 feet into that trail I saw the sign for the Morning Snack Trail which quickly climbed 50 feet or so to gain the top of the hill.

The Morning Snack Trail works its way up on the hill and eventually ended at the Fort Holmes Rd. Upon gaining the road it quickly bends and you can either go straight and end up at Point Lookout or follow the bend in the road to Ft. Holmes. I went to Point Lookout and had amazing views of the east side of the island. The fall colors, Lake Huron, even Sugar Loaf Rock. It was all great. I took my one and only panoramic shot of the trip from here.

After checking out Sugar Loaf Rock from above at Point Lookout I took the wooden staircase down to see it up close. It has near vertical sides on almost every side. It would be a rock climber's paradise. As I walked around to the "back" side of the rock I finally spotted what looked like a class 3/4 line that might afford a safe unprotected climb up this amazing rock. After the hike I did some research on this and found another guy who seemingly had done just that line. After checking out Sugar Loaf Rock I headed back up the wooden staircase and followed the road over to Ft. Holmes.

When I was up on Ft. Holmes in 2011 the weather had created near white-out conditions. There really were no views and I had little time. This year the views were great. Wonderful pictures looking out over Lake Huron, to the Mackinac Bridge, as well as the nearby islands of Round Island and Bois Blanc Island.


A quick tour of Ft. Holmes
At this point my time began to run out and I had a lunch deadline to meet. I started down the "Watch-Your Step" trail which is a wooden staircase and made just one more stop at Skull Cave. There I was disappointed to find a fence bars you from actually going in the cave. So there wasn't much to see here. After Skull Cave I fllowed the Garrison Rd. out to Huron Rd. and then back to Mission Point Resort. The horse carries were a-plenty as I finished this enjoyable morning hike.

This track was taken with the BackCountry Navigator app on my Droid Bionic. It follows my entire route around the island.

The photos I took on this hike, as well as others from my stay on Mackinac Island, are in this slideshow or you could click through to see them on Picasa: 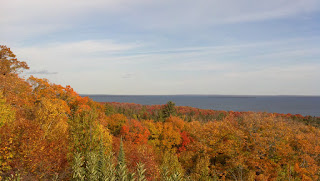