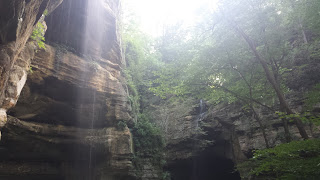 It had been many years since we'd made the trek down to Starved Rock.  The last time I could say I was there was in the fall of 2002 when Sarah and I began dating again.  It was one of our first big dates together.  For this time around, my boys and I happened to be staying with my parents in the Chicago area and were looking for something fun to do on a Saturday.  Being an outdoors family, looking for a good hiking day seemed to be the right choice.

We had some lunch and then made the drive down.  As we arrived we found that the main entrance to the State Park was closed.  The rains have been crazy throughout much of the Midwest as of late and the Visitor Center parking lot was flooded.  We could also tell there were still a lot of people trying to visit the park today and so we decided to head for a trailhead towards the eastern end of the park to avoid some of the crowds.

We parked at the trailhead just east of LaSalle Canyon.  The parking lot was full but there were a number of cars parking in a field lot across the highway.  At the trail start there was a sign warning of flooding on the River Trail which had us concerned of what we would find.  Nonetheless, we pressed on.

There were some muddy spots on the trail descent down to the river, but easy to pass around.  After a staircase heading downwards we made it to Owl Canyon.  The boys were instantly intrigued by exploring this as you can see in some of the following pictures.  What we learned today, was that simple hiking, especially through the woods, would bore them quickly.  But exploring canyons and scrambling rocks holds their interest well.

After playing around at Owl Canyon a bit we finally convinced the boys to head onwards.  It was pretty warm today and plenty humid so we were drinking in the fluids to keep going.  Our next stop on the trail was the foot bridge that is between the trails that head into Tonty and LaSalle Canyons.  We made a note to consider hiking them later in the day.  The trail heading into Tonty Canyon had signage saying people should stay out of there.  No reason why. 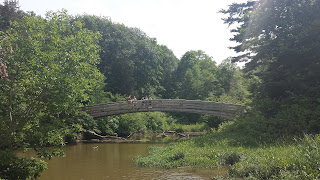 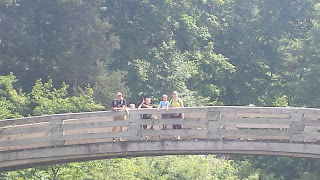 Not long down the trail, we explored another shallow canyon.  I believe it was called Lonetree Canyon.  It was a wet approach to even get into it.  We had to share it with a dozen or more other people who were all going for different pictures. 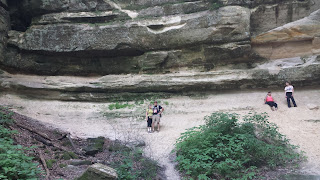 After this canyon we continued course following the trail near the river.  There was no real flooding to be concerned about as the initial sign had warned.  There were several spots that were pretty muddy however, and we had to find ways through or around them.  There were several great views ahead along the river of the dam and locks approaching.
We could also see Eagle cliff. That became our next destination, we followed trail up to the cliff and were treated to some beautiful views. 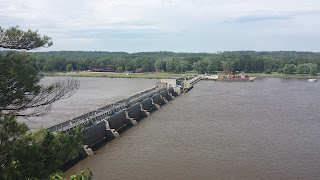 Eagle cliff was completely covered in boardwalks.  No doubt to keep the gawking tourists safe from themselves.  It did provide a chance to get raised up above nearby treetops for better views, but it took away from the natural feel of being in such a nice place.  From there we made the short walk over to the Lover's Leap overlook which gives you a view of Starved Rock.  Not an overwhelmingly impressive view. 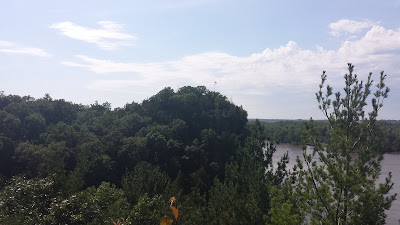 From Lover's Leap we worked to follow the map and head to the Visitor's Center.  Best as we thought we had followed the trails we ended up at the Lodge complex first.  We then made another effort to follow signs from the Lodge to the VC and this just deposited us behind the lodge restaurant.  So we decided to make the best of it.  Found bathrooms, drinks, and ice cream at the lodge to refuel.
On the return trek we followed the trail through French Canyon which was a boardwalk through a large chunk of the forest.  This brought us to Wildcat Canyon and the top of the steps that lead into the Bluff Trail.  We took the Bluff Trail until it heads back down the steps to the River Trail near Lonetree Canyon.

We returned to the bridge between the Tonty and LaSalle Canyon trails and decided to investigate these.  We hiked into LaSalle Canyon and heard loud noises like people playing.  We followed the trail which hugged the side of the LaSalle and eventually it wound into the dead end and we found 20+ people enjoying a waterfall and some pools in the back of the canyon.  We followed the trail as it went behind the waterfall and contoured the back end of LaSalle Canyon and started to head out.

This wrapped around and began on to Tonti Canyon.  This was narrower and we encountered much mud.  Mom finally bailed at a tree where there was a muddy slope to traverse. The rest of us carefully maneuvered it and ended up hopping out into the creek bed which was more firm.  Back in here we found a half dead raccoon.  He was alive and Luke nearly stepped on him.  It looked very sick.  In the back end of Tonti Canyon were another few waterfalls and a beautiful area.  Only a few people back in there. 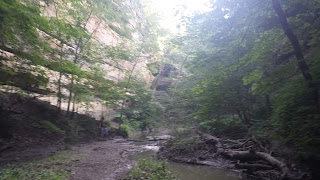 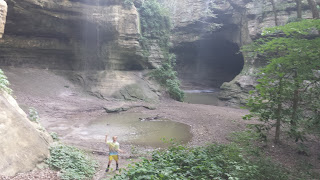 Leaving Tonti Canyon we crossed over a foot bridge and then had trail back out to the main River Trail.  That was our last adventure of the day and we took the River trail back to the trailhead and our parking spot.  A fun 6.5 miles with the family at Starved Rock and the weather held up nicely.  On our drive back to Chicagoland we hit some pretty wild thunderstorms.  We were thankful they held off long enough for us to hike.