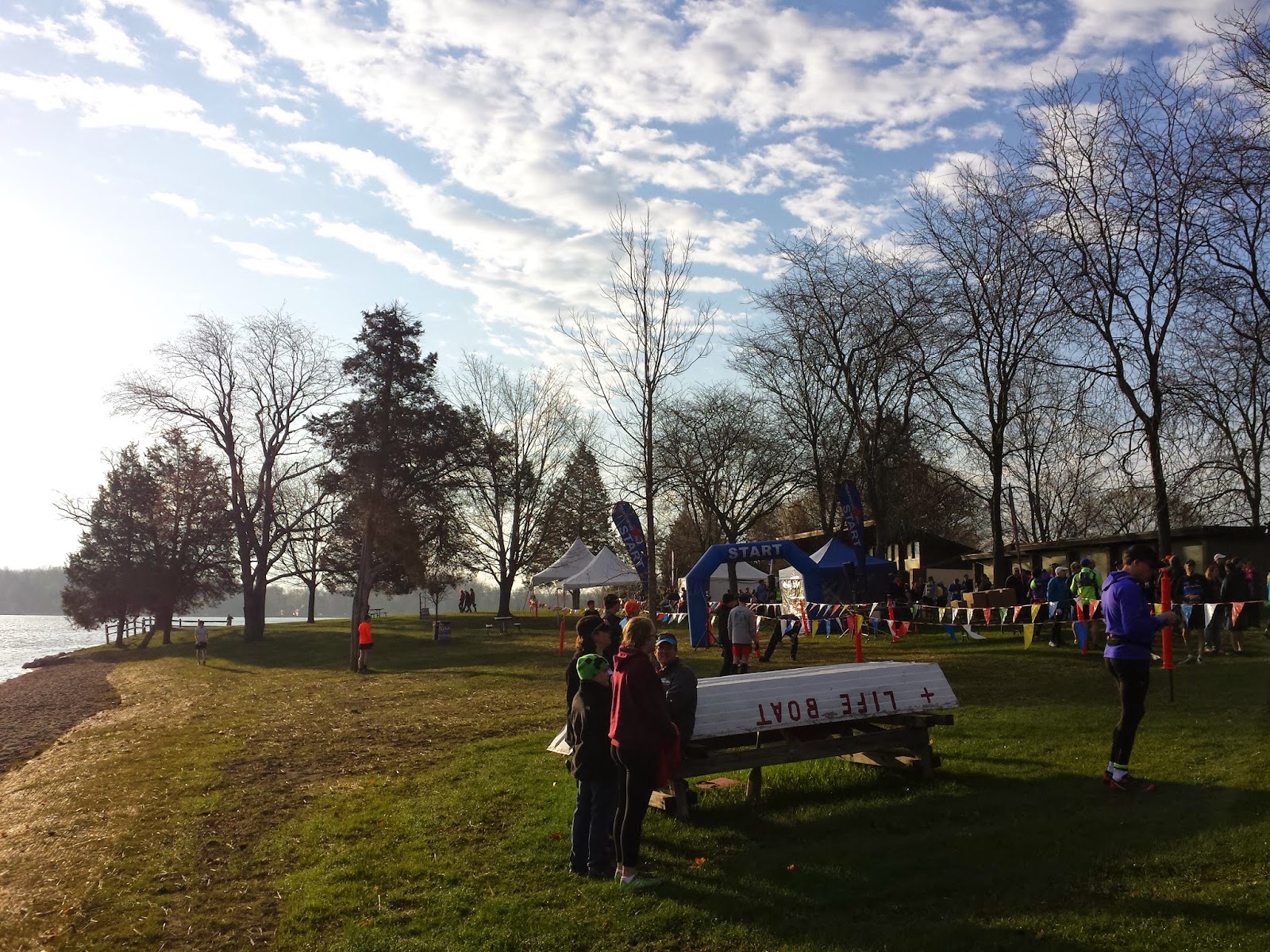 This was a race I had been looking forward to for some time.  Every since I happened to "discover" the Poto trail and Pinckney Recreation Area I've been in love with it as my local wilderness playground.  Though my heart is usually out in the mountains of Colorado, it has helped to have a place like this so accessible and close to home.

Late last August I backpacked into Blind Lake and I ran the Half-M race course from my camp.  I quickly realized what a challenge it was going to be.  The elevation changes are constant with few extended flat stretches.  Some of the hills just take it out of you.  On that initial run, I ended up walking several sections.  Of course, having hiked about 8 miles with a pack the day before probably didn't help this effort.

Heading into 2015 I was watching the website ready for sign-ups as I knew this was one of my highlight races for this year.  I also looked into the Serious Series and decided that would be a great way to turn 2015 into a year of the trail races.  I signed up for all three of those races and to top it all off, I also got into the North Country Trail Marathon.  What a line-up for this year!


Fast forward to today's race.  Rather than trying to put the entire race into a narrative I'm going to break down my experience into useful sections of information.  So here goes:

Pre-race
I arrived at 6:55a.m. amidst a parade of cars heading into the Rec Area.  I got to the registration tents and picked up my t-shirt and bib and was quickly done.  I decided to walk the first half mile of the trail through the Losee Lake trail section to loosen the legs and scout things out.  As I walked back to the parking lots the parade of cars continued and the lots were near full.

I did final bathroom break around 7:30a.m. as the restrooms were beginning to get packed.  I downed some CLIF Shot Bloks starting about 7:45a.m. and hung around the start area.  I had had my race clothes on as well as two sweat-shirts and some pants.  I finally ditched these in the car.  It was just over 40 degrees.

Clothing
On top I wore my long-sleeve black tech shirt as well as my new blue Salomon tech shirt over it.  On the bottom I had my black pair of running shorts.  It was chilly the first 3-4 miles and my fingers were cold.  After that though I rolled up my sleeves and probably could have done without the long sleeve layer.  It never became too much of a bother however so I would have to conclude the clothing setup for today worked just fine.

For breakfast I had an apple and two granola bars as I drove over to Pinckney. I also was sipping on a Gatorade I had in the car.  Pre-race I worked on the margarita-flavored CLIF Shot bloks.  I realize I don't particularly care for that flavor.

During the race I used GU gels at miles 3, 6.5 and 9.5.  The latter two I used near the aid stations.  For all three I ended up pocketing the trash in a zip-lock bag in my pocket.  I was also sipping on the water in my Osprey Rev 6 hydration pack which I think really helped.  I also drank some of the lemon-lime gatorade at the latter 3 of 4 aid stations.  I really think this nutrition plan worked well and though I usually only do 2 Gu's on Half Marathons, with the hills and extra trail work the third probably wasn't overkill.

Casualties
Being a trail run, its worth reporting on what running this technical trail did to me in return.  Through the first 12 miles my only slip-up to note was a nearly rolled ankle.  I must have hit a step wrong and began to roll my right foot over but caught it before any damage was done.  Near mile 12 however, as I was starting to taste the finish line, I tripped up and went down.  I don't even recall it being a root or a rock, I'm pretty sure I just lost balance.  Got a few small scrapes on my left knee and bruise my hand, but otherwise I was good.  A nice runner about 25 yards back saw me go down and hollered out asking if I was okay.  A kind gesture.

Race Results
I hopped into the start corrals with the 8-minute mile pace.  Though they worked to get everyone into pace groups this was done without much organization and so people could really just go where they wanted at the start.  This worked as nobody was too concerned or in a hurry.  I decided to get near the front to avoid getting caught up in the masses.

I took the first few miles pretty conservatively, got passed by a handful of people, and perhaps passed just a few myself.  In part I was getting a feel for my pace and a feel for what it would be liking passing other runners.  The hills are pretty small the first 4 miles or so with some simple ups and downs.

As we neared the bigger hilly section from miles 4 to 6.5 at Blind Lake I picked the pace up a bit and found myself following many of the same guys.  I worked on keeping the strides real small through the hills to not burn out.  Before I knew it we were heading into aid station #3 at Blind Lake and I was feeling pretty good.

The first hill after the road crossing after Blind Lake was a doozy but the course flattened out a bit after that.  I tried to make up some time after catching my breath in the flat section.  The hills leading into the "Short-cut" were also a challenge but the long flat short-cut helped me to regain both breath and speed.  I passed up a handful of guys working along the short-cut leading to the last aid station at mile 9.5

I was feeling great heading into the last section of the race and I was barely seeing anybody.  The only company I had was about 4 different groups of a dozen boy scouts hiking out to the scout camp off to the west.  I knew the last big hill would come soon and around mile 11.5 it did.  I slowed up my pace but I made the hill without having to stop or walk it.  It was on the hill I passed one more runner and the last lady.  I would learn at the finish she was the winning lady finisher.

Post-race
At the finish line they were handing out medals and had water bottles and snacks for all.  Bagels, cookies and bananas were on the menu and I grabbed one of each as I walked around and cooled off.  They had a TV display with the race results coming up in real time showing everyone where they had finished.  This was a great help!  Since I wasn't getting any awards, and had kids playing soccer, I didn't stick around long.  I heard a PR announce that they would start doing awards around 10:30a.