Basic Technical Info
As with any winter ascent, we had done a lot of homework on the snow and weather conditions before today arrived. We were pleased to find a number of recent Conditions Reports and Trip Reports that helped to paint a pretty good picture
of what to expect. The general word was that the trail below treeline was snowy but well packed.  Above treeline it was wind blown in parts.  Little to no avalanche danger.  Our weather report called for slight chance of flurries in the morning and temps just below freezing til afternoon.  Definitely all good news!


In terms of gear we brought snowshoes along to the trailhead with us but we ultimately opted to leave them in the car.  A good decision.  At no point on the trail, even during our descent in the afternoon would they have been needed.  We wore microspikes from roughly 11,000ft and up.  They were greatly helpful on the firm early morning snow and more than sufficient for all the snow higher up on the peak.

Clothing-wise I wore two long-sleeve tech shirts and then a gore-tex jacket over them.  On the bottom I wore my Mountain Hardwear winter pants.  I started the day with a light pair of gloves on.  As we hit heavy winds above 12,600 I put on balaclava and my winter gloves and cinched my hood tight around my head and face.  This was all sufficient to hold off the wind chills.

I also carried a GoPro camera along for the first time on a 14er.  This was a new toy I picked up a few months ago for various reasons.  I didn't use it on the way up until about 13,800 as we prepared to tackle the summit ridge.  I was able to take 31 minutes of footage as we climbed the ridge to the summit.  On the descent I tried out the timelapse feature.  I set the camera to shoot a photo every 60 seconds to get a general look at our entire hike out.  This lasted until my batteries were all dead about half mile from the trailhead.

This is the GoPro video our hiking along the summit ridge.
I have edited the 31 minute original down to 17 minutes.
Pardon the noisy wind.  It really was that bad.

The Hike
We left our place of stay about 4:30am for a relatively easy drive to the Denny Creek trailhead.  We arrived just before 5:30 and were on the trail around 5:35am.  It was pretty chilly and the first 10 minutes of hiking left me pretty cold on the trail.  Once the slope of the trail got the body working hard, however, I warmed up pretty quick.  I learned this lesson on Pikes last year that hiking cold the first 15 minutes is ideal because you're going to warm up eventually.  This saves from having to stop so soon in the hike to change up clothing layers. 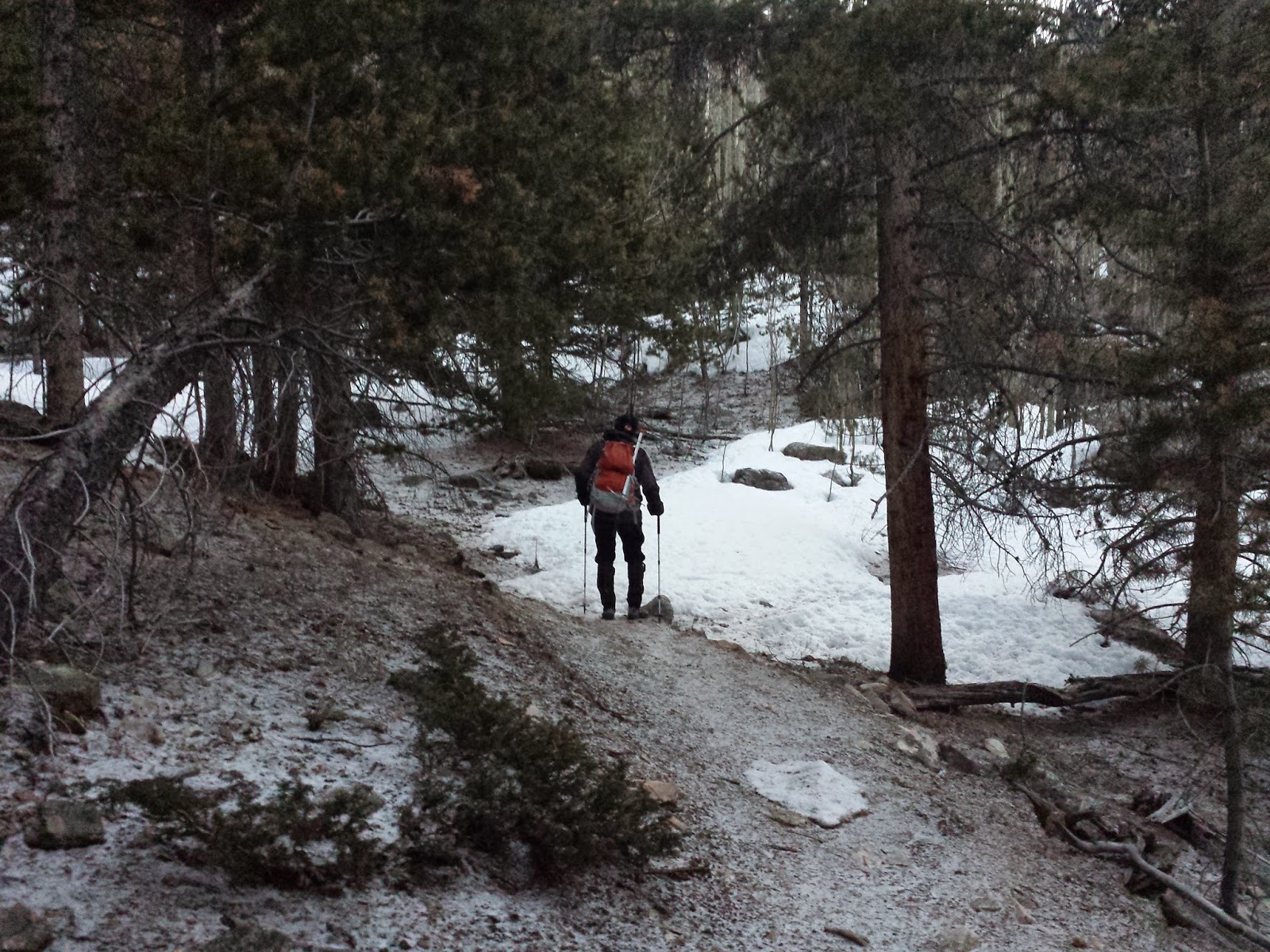 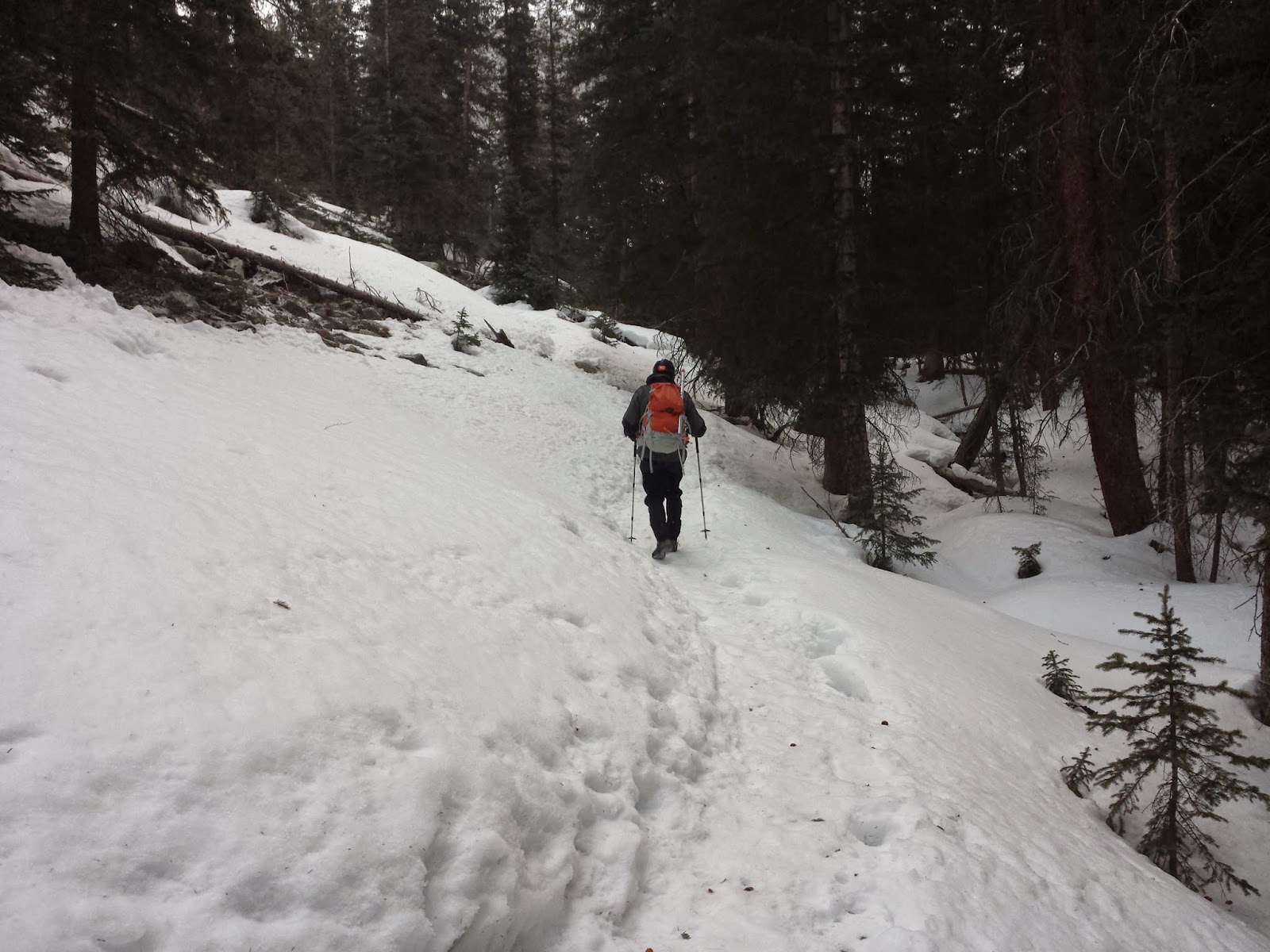 The trenched trail was easy to follow even as we had headlamps on for the first 45 minutes or so.  There were patches of no snow along the way, but in most places it was a heavily compacted snowy trail.  As we progressed the debate slowly began as to when to put on the microspikes.  We hit one or two slightly steeper sections of trail where the extra grip was almost needed, but we held off.  You can see on my map below when we finally put them on.  We happened to hit a 4ft by 4ft patch of pure ice on the trail and decided it was time for the spikes.


The first route-finding challenge was in a meadow area that we recalled from the trail reports of others.  This was about 11,300ft in elevation and I have a waypoint on my map marking it.  We followed the trail which was clear at first.  We found it began to break due west and away from the slope and it was at this point we stopped and did a visual hunt.  I happened to notice some footprints in the snow near where the slope went up and we decided that must be it.  We were right.  This slope led us into a bit of a gully ascent in which we attempted to follow the switch backs of the trail.  Some had just trudged straight up the middle in the snow. At the top of this slope the trail mellows out and heads east through the woods.  We noticed massive postholes all throughout this area and were glad for the firm morning snow.  The trench was still easy enough to follow through hear and at just below 11,800 we finally hit the edge of treeline. 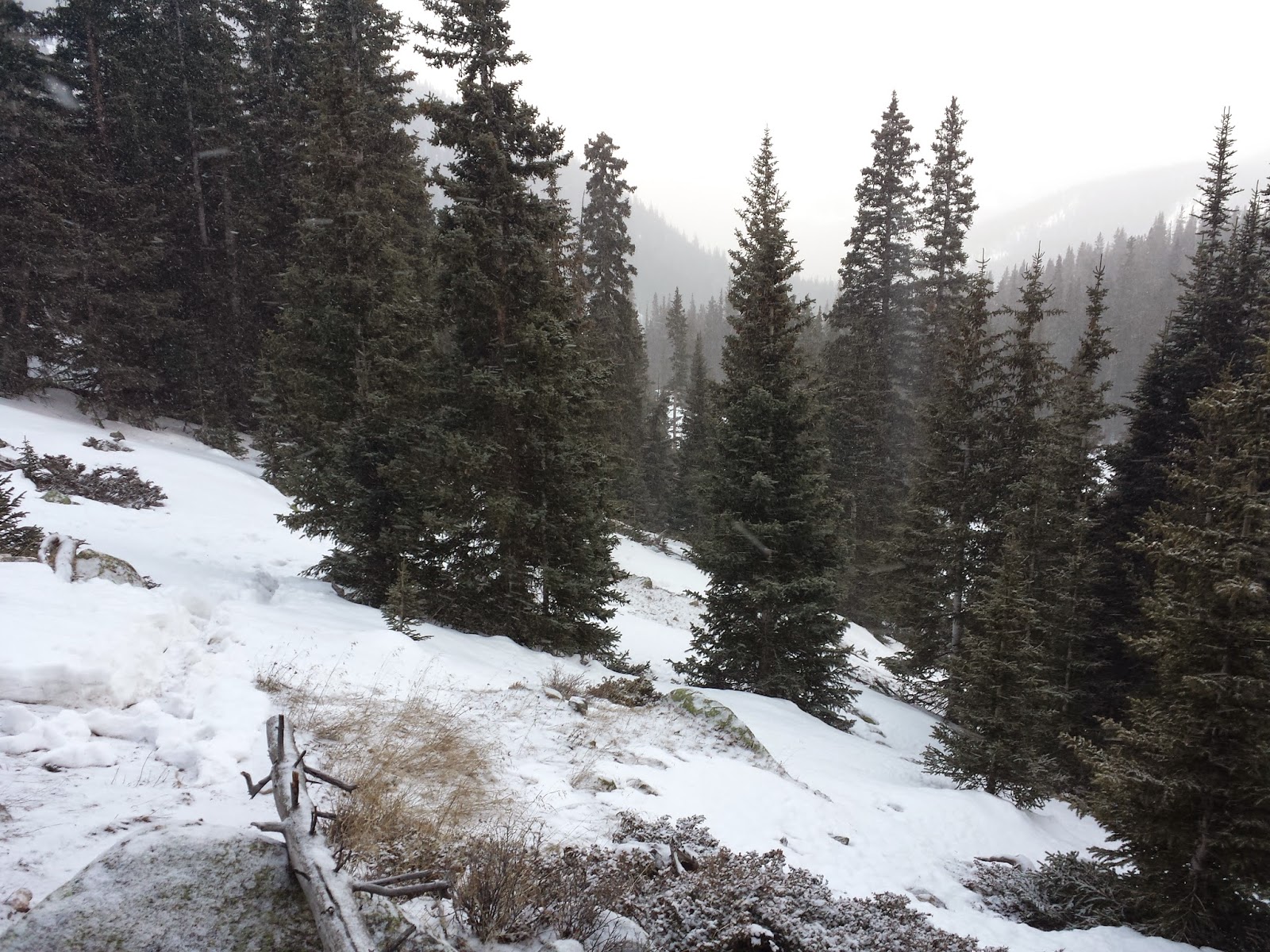 From here on out we could see no further trail. To mark where we left the trees we used our poles to make a big "W" in the snow, hoping to spot it from above on the way down.  We ascended the slope ahead of us shooting for a series of rocks.  We gained this about 200 feet up.  I checked the GPS and could see the summer route was well to our south. We began to ascend climber's right across an unbroken snowfield.  I finally pulled my ice ax out.  The slope wasn't too extreme but enough to have some protection. We left the snow field as we reached more rocks.  We could see patches of tundra out to our right and we traversed to them.


We could see what appeared to be a ridge line and hoping to have easier terrain and possibly the summer trail and so we headed for that.  Apologetically, we "aerated" some tundra along the way with our microspikes.  We did indeed find some semblance of the summer trail poking out of the snow. We were at about 12,500.  We followed it for awhile.  It was here the wind began to pick up with a ferocity. 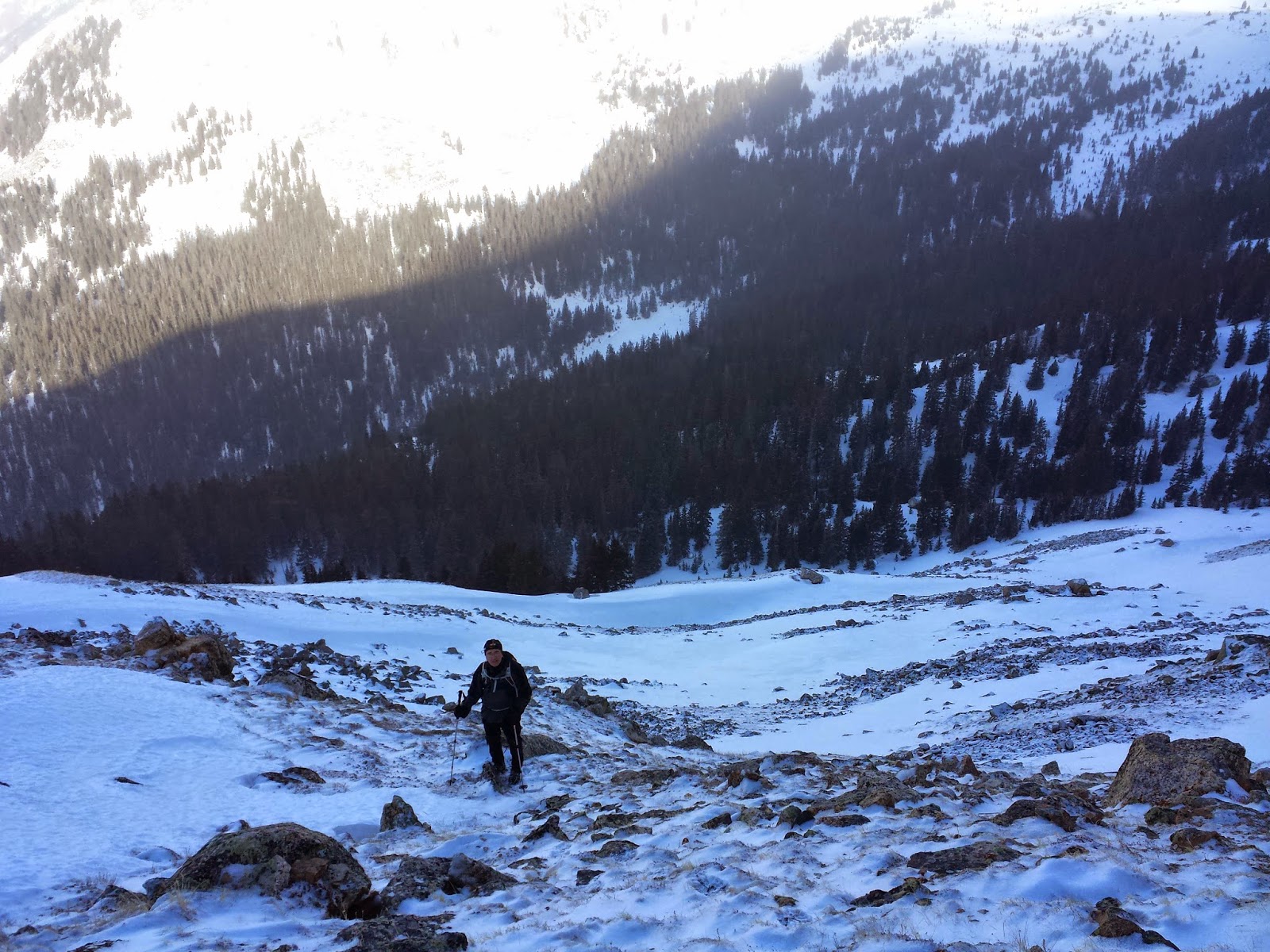 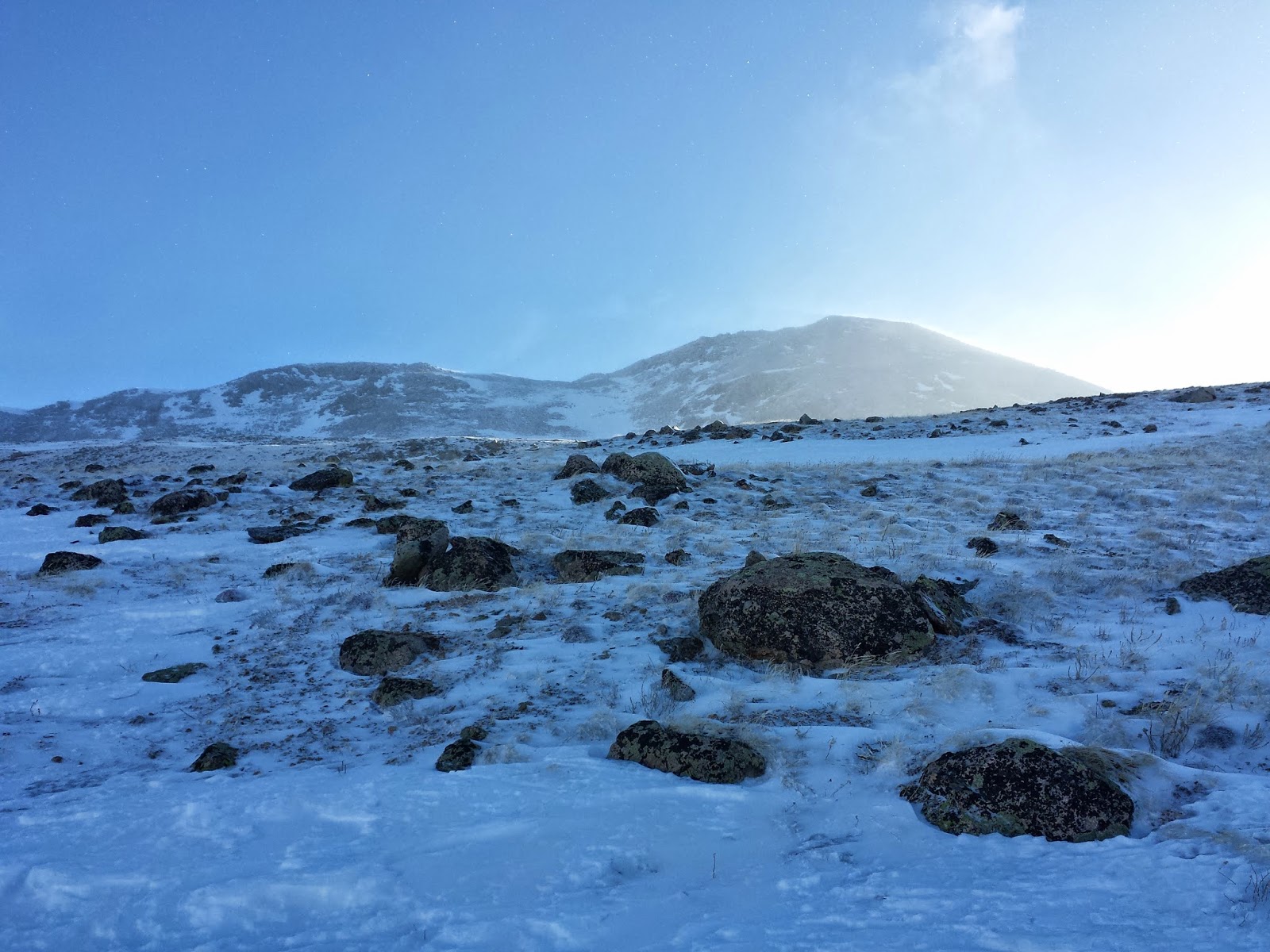 At around 12,700 the terrain nearly flattens out for a bit. The snow was heavily windblown here but also obscured any sign of trail.  Ahead of us we could see the steeper slope heading to the summit ridge. We debated whether to take the steep snowfield on the right, skirt the rocks along the snowfield up the middle, or to follow what we could in the slightly less steep rocks on the left.  We chose left.  We made a bee-line for it and as we neared we began to see trail segments.  We ascended this area and patched together what we could of a trail. 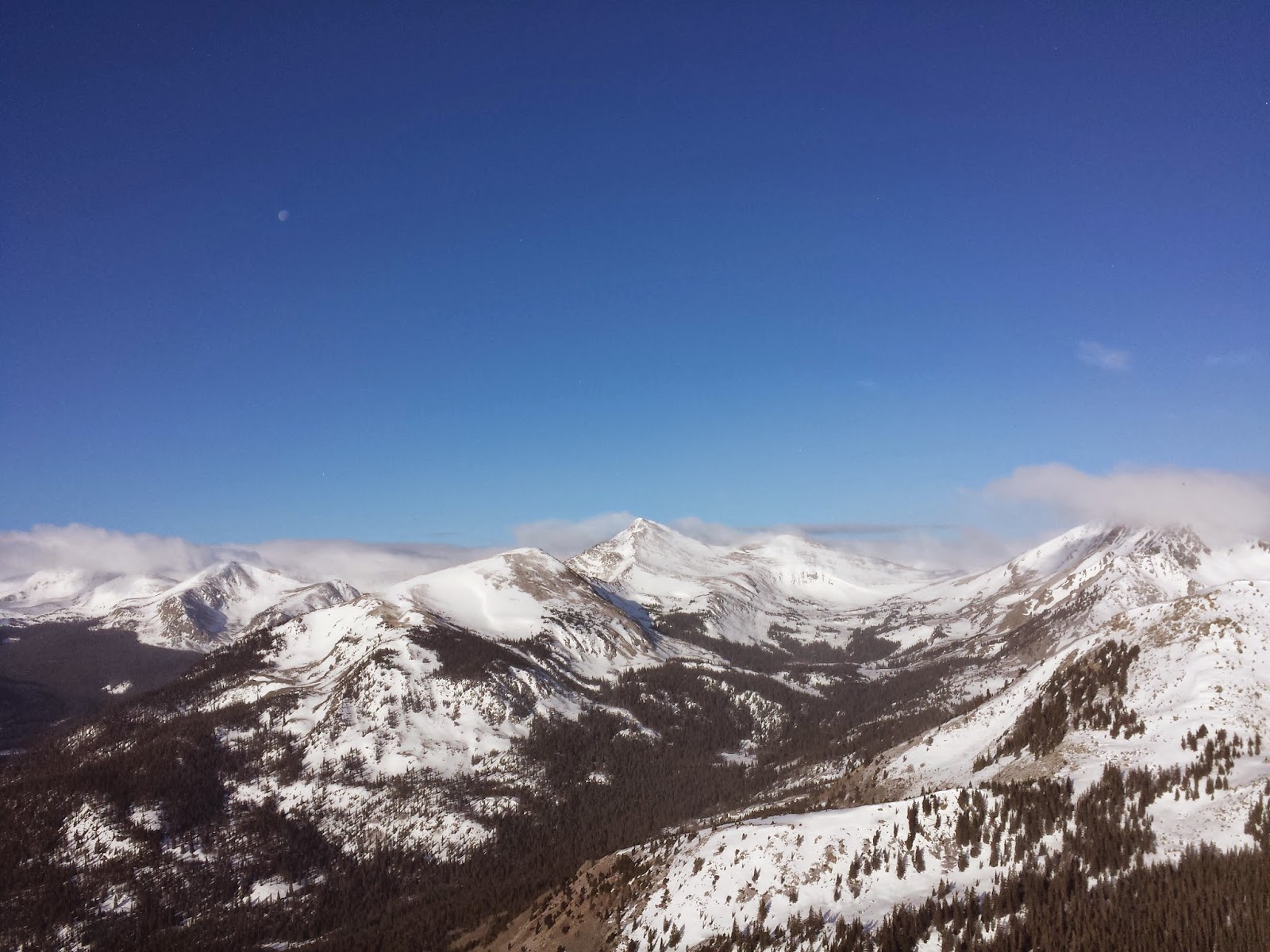 At about 13,900 I put my GoPro camera on and we gained the summit ridge not long after.  There was a flat saddle for a bit and then rock outcroppings that started the ridge traverse to the summit.  As we proceeded we were fascinated to see the rocks coated with hoarfrost, it was a beautiful sight.  I led the way and followed some basic cairns along the ridge.  I reached a point following some footsteps, about halfway across the ridge at a false summit, where things narrowed up and I was surprised at the exposure the steps led into.  Dad thankfully spotted a good cairn that moved around the right side of this section. 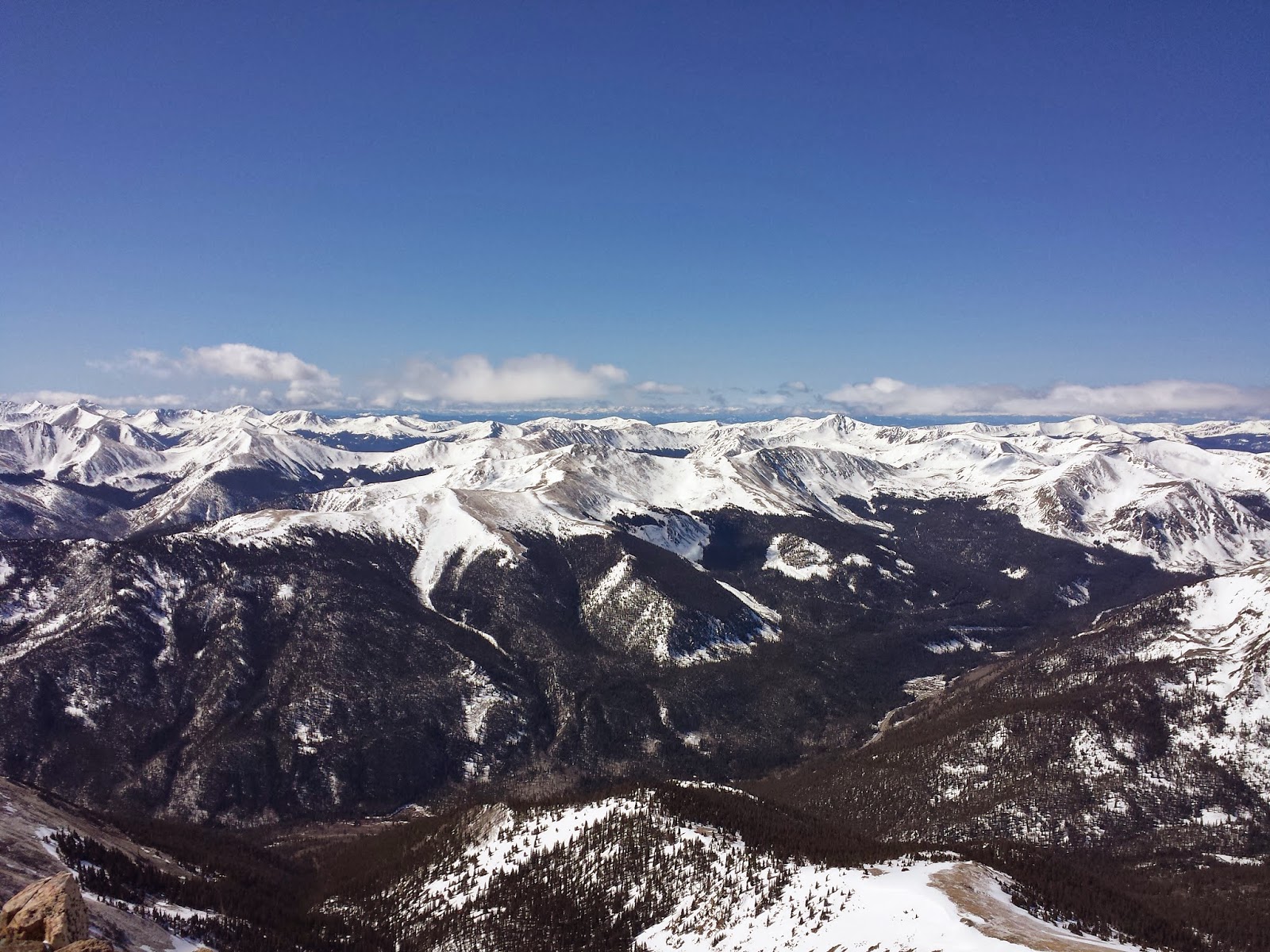 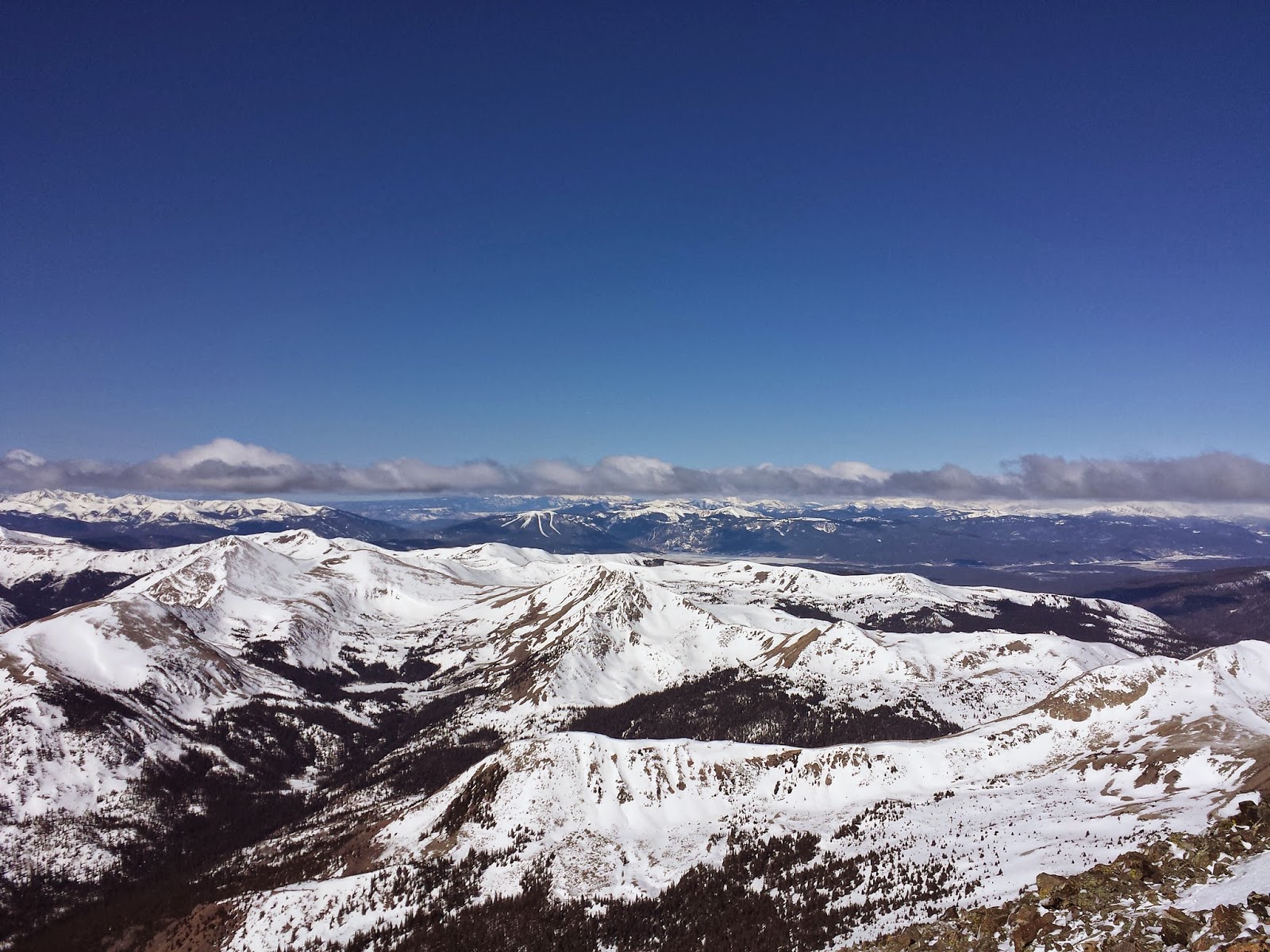 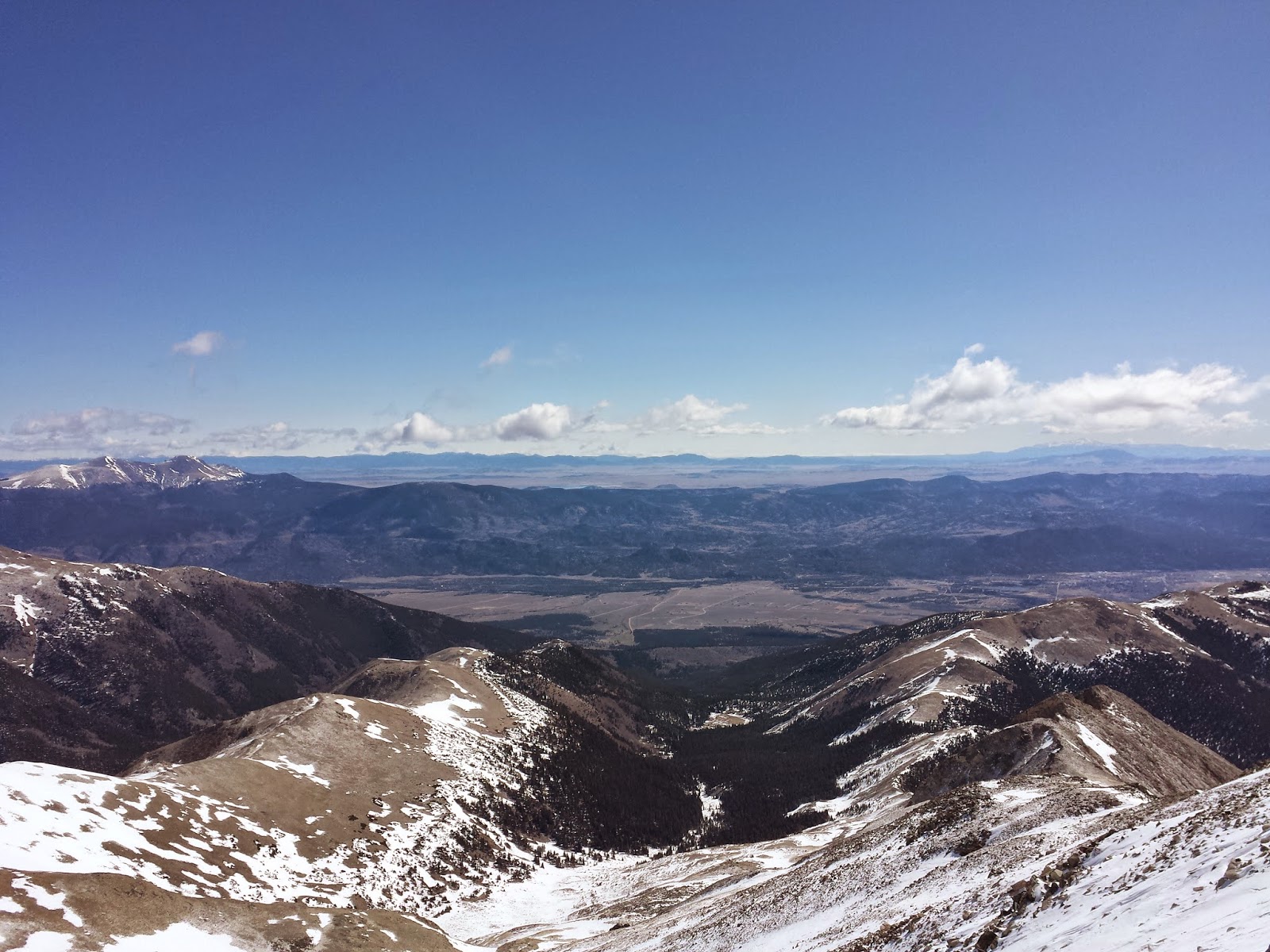 Not long later we gained the summit. It was 10:22am.  Thankfully the winds had lessened up here, though it was quite cold. It was too cold to hang around a long time or to be making phone calls.  We sent out some texts, took some photos, and ate a bit, and then it was time to head down.  We spent perhaps 20 minutes on top.

The descent of the summit ridge went by without concern and we were soon back to the saddle.  Descending the upper gully was fairly easy as well.  With better vision from above we were able to mostly follow the summer switchbacks until we were back down to the flatter snowfields.  From there we mostly made a beeline south through the snow as the trail was mostly obscured. 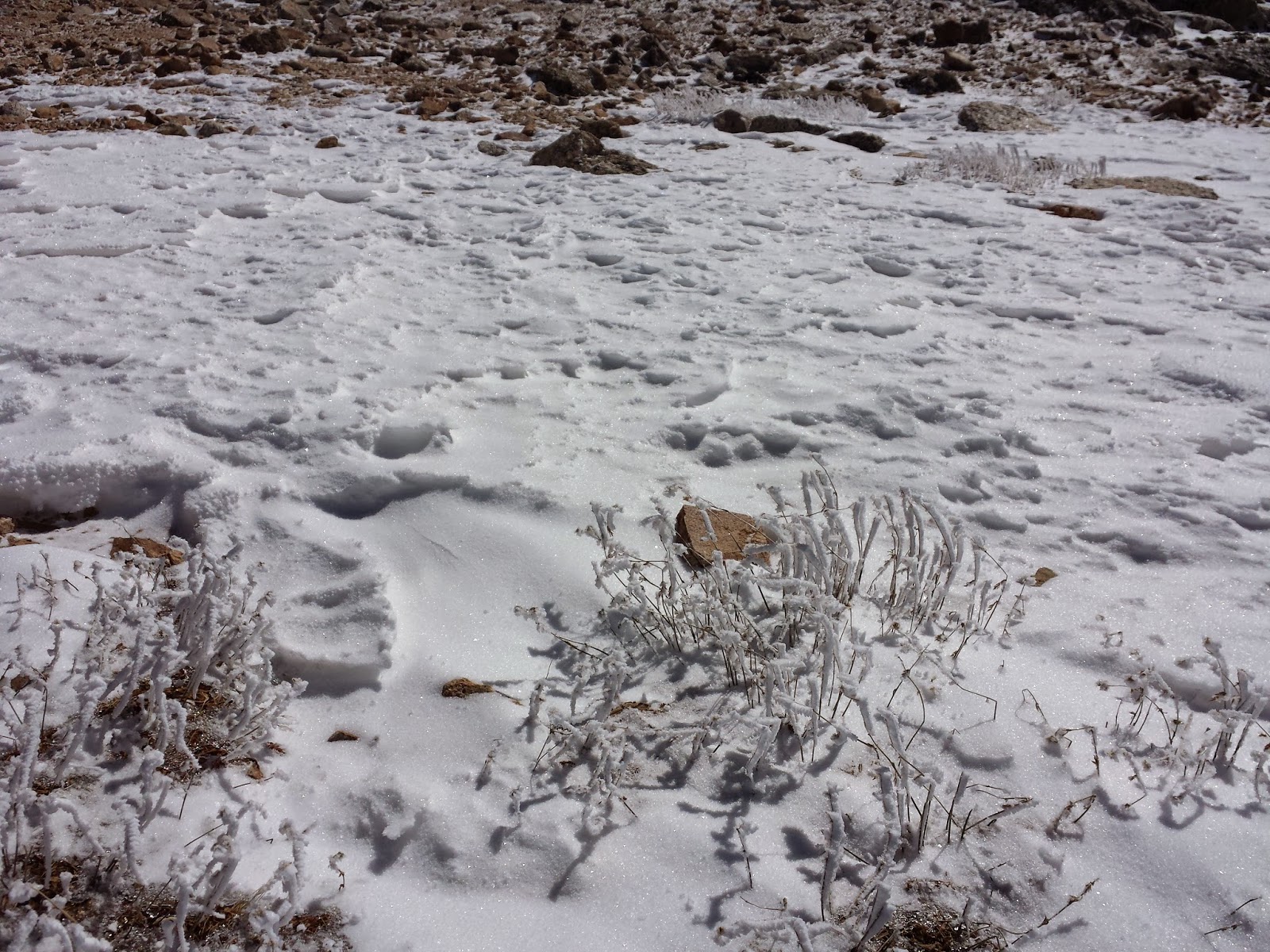 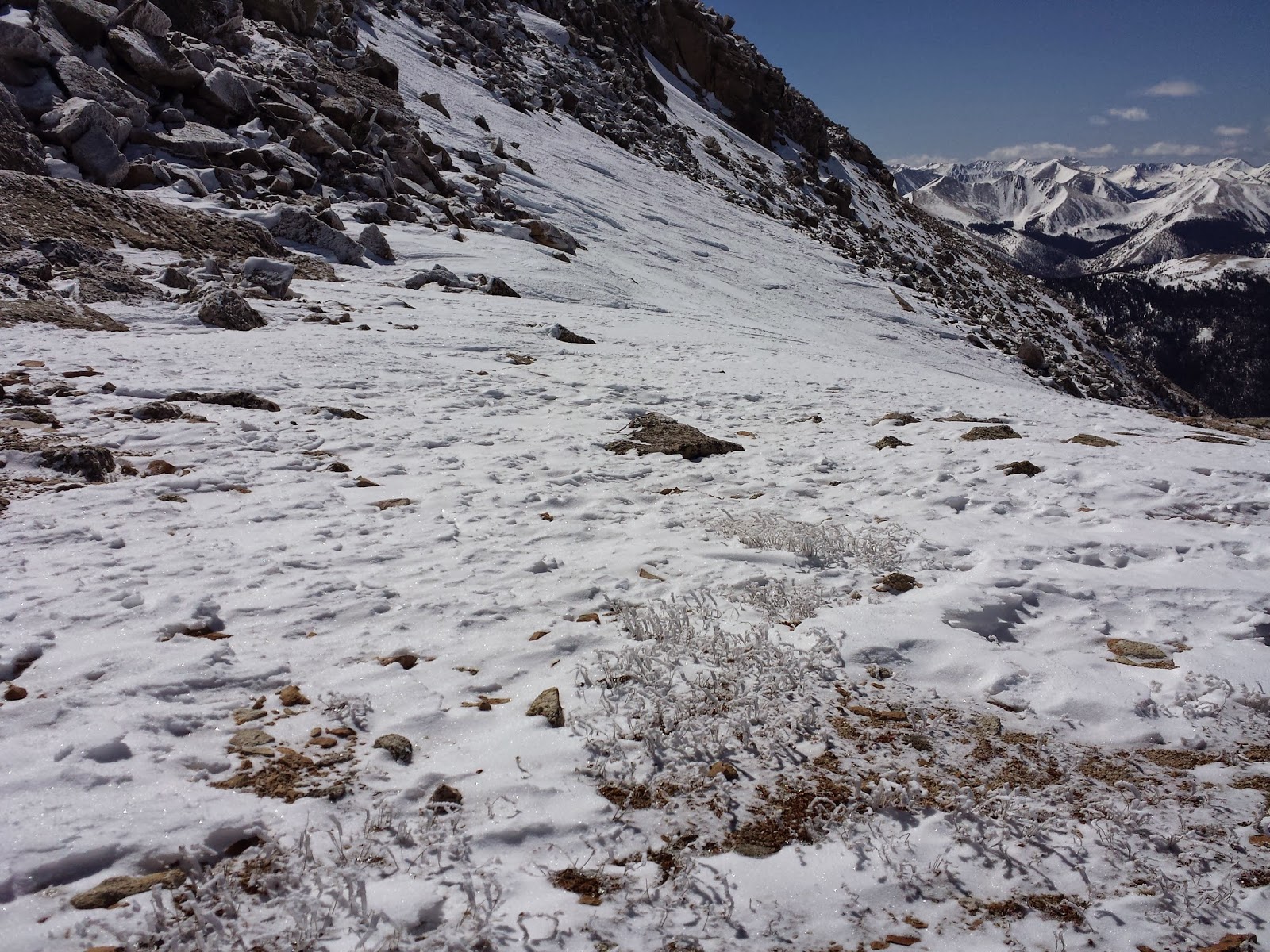 Frost even on the ground plants on the saddle

Around 12,600 we regained the summer trail where the snow was melted out.  We followed it long as we could down the slope.  This worked until we reached a shelf like area at 12,200.  Here the trail disappeared into the snow.  A large amount of footprints headed to the northwest along the shelf.  We spotted the trail moving ahead to the southwest through a snowdrift.  Thinking following the summer trail was a wise move, we pushed the snowdrift and ignored the footprints.  Big mistake. Had we followed the shelf to the northwest we could have eventually regained the snow slopes we had ascended in the morning.


Instead, the trail segment we followed eventually ended up buried under snow in the woods. At first the snow was firm enough to support us.  As we bushwhacked to about 11,900 we started to posthole. We traversed a steep snow slope starting to make a northerly line for the morning's trench.  We started to hit waist deep snow and it was a mad dash to push through it.  I used GPS as best as I could to direct us due north through plenty of moments of postholing until we finally regained the morning's trench and familiar terrain.  After finishing this area of nightmare postholing we did at least resolve we were still pleased, overall, that we had not brought the snowshoes on the hike.  Though they may have helped in this area, it still wouldn't have been worth dragging them up to the summit and back.

The trench had also softened from this morning but it was still very hikeable.  We may have postholed in just a few places on the descent down to the meadow area.  After the meadow area it was smooth sailing on consolidated, but melting snow.  Postholing wasn't the problem anymore, but rather a few softened and muddy spots.  We finally made it back to the trailhead at around 3:30pm.  The detours on the descent chewed up some time, and even so, it took a bit longer than we had anticipated, but in all, a very successful and enjoyable summit day.

The slideshow below is a timelapse taken with my GoPro camera.  It was set to snap a shot every 60 seconds on our descent.  I did this, in part, because I wanted to test and play with this feature on my camera.  It does provide some useful photos however.  On a descent its easy to get the brain into a routine of just making a bee-line for the car and I have found myself often forgetting to snap photos and enjoy the scenery.  This was a way of accomplishing that without having to do anything.  Its also a neat way of getting a regular interval of photos throughout the entire descent to see what the scenery was like, even if I was staring down at my toes, throughout the entire trail.  Its worth noting my battery died about 2 tenths of a mile from the trailhead.  A useful suggestion would be to continuously click the right button to move quickly through the photos.

I have a track and waypoints from the hike all contained in a KML file that you are welcome to download and use (at your own risk).  On the map, the green track is the standard summer route on Yale.  The blue track is our ascent route and the red track is our descent route.