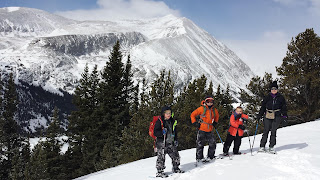 Every year we like to get in a snowshoeing outing to just enjoy the snow as a family at a leisurely pace.  Having done Tennessee Pass last year we opted to head back to familiar territory on Hoosier Pass.  It was around 20 degrees that morning at the pass and so we bundled up pretty warmly.

Despite the cold temps, the sun was out and there was no wind and so we were unzipping and ready to drop layers feeling plenty warm. I never did put on my cold winter gloves and made it with a light pair the whole hike. There probably were several feet of snow on the ground with the main trail area relatively compacted. We found there was about 4-5 inches of powder on top of a thicker icy base.

This trio of photos are examples of the beautifully "frosted" trees

As we left the pass we followed the wide highway of a trail/road through the trees and soon hit the slope where the trail/road begins to head south around the slope. We found our way at the begin pretty easy seeing the faint hints of old tracks. We followed the road along the southside of the ridge. The snow quality remained good our entire hike. The boys however were pretty sluggish. Every 2-3 minutes I was stopping to help one change out gear, or to fix Seth’s snow shoes or to listen to their pleas to just go back to the car because they were tired. We told them we were going at least a mile in and that was non-negotiable.  Not sure why they weren't into the hike mentally today, but the ascent portion was a bit of a grind.


Right around a mile in we hit the steeper slope completely snow-covered that I recall from several years back. The snow was so thick you could not tell where the road was. I remembered this appearing to be a potential avy slope in the past but giving it a good visual inspection today we were pretty confident it wasn’t the kind of slope to slide or present us any danger. Rather, the steepness of it combined with a crusty snow made the crossing of it difficult for the boys. Luke and Seth made it it ¾ of the way across to a point where the slope was its steepest. Luke dropped a glove and it rolled 15 feet down the slope. He was able to retrieve it. We finally decided to have the boys turn back. I came out and helped Seth and then he fell and slid a few feet. It was tough going for them but we got them back to easier terrain. Dad and I went further on to make the saddle. We found sections of the road that were wind blown free of snow. We found the wind increase as we neared the saddle. We stopped up top and grabbed a quick snack and drink and then headed down to catch the others

On the descent we found XC ski tracks and a dog track. That group had apparently gone as far as the steep snow slope and then turned around when the road thinned of snow. We never actually saw them. We made good time heading down. Stopped once to radio with the others who were nearing the trailhead, and then were stopped by 2 skiers and a snowboarder who were heading up to ski down the face of the the ridge. We made it back to the car and loaded up to head to the condo.