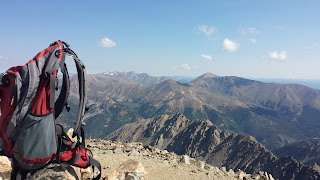 I'm not sure exactly what it is, but in recent years I have found myself compelled to consider La Plata with every hiking opportunity that has come along. I don't know if it is the aesthetics of the route, the convenience of its access, or what. I was on La Plata in April with my Father doing a "winter" ascent and when time came for me to head back to acclimate for the Pikes Peak Marathon La Plata flew to the top of the list of peaks to choose.

I found myself with the exciting opportunity to pick whatever hikes I wanted to prepare for the Pikes Marathon. I flew out to CO with my wife on Tuesday evening and had Wednesday thru Saturday to get myself acclimated. I wanted to pick easy access hikes as we wouldn't have 4WD. I also wanted to pick hikes that wouldn't completely wear me out. I also wanted to pick safe solo hikes which meant something I'd done before and reasonably wouldn't be left out alone. La Plata hit the top of the list, despite the fact that I'd just been there in April. It would become the first 14er I've done twice in a row, even though those attempts were separated by 4 months.

Plans fell into place nicely and my wife and I did arrive in Denver and drove on out to Dillon Tuesday evening. As I've done a number of times now, I made immediate plans for the following morning to hike. I've come to realize that at this point my body can handle the incredibly short turnaround and the altitude will not affect me greatly. I was in bed in our hotel around 1am and up again at 5am to make my way to L.P.


I made the trailhead just after 6:30am and was pleased to find the outdoor temp was around 41 degrees, a perfect wakeup temp. There were already 8 cars in the lot with one couple still in the lot getting ready. I was quickly on the dirt road heading into the trailhead. I tried to pack lightly for today. Clothing-wise I wore zip-off pants, a short sleeve and long-sleeve tech shirts combo and carried a jacket. I had a decent amount of food and about 3 liters of drink.

Once on trail I quickly passed a few people and then ran into a couple heading back towards the TH. At first I thought somehow they had already ascended but they stopped me and asked if we were on the right path. They seemed to be lost. I assured them the trail we were on looked familiar and that I had just been here a few months back. We were on the section heading east, already past the major footbridge. I double checked my GPS for them and we all found ourselves on the right track.

I made quick work of the early flat sections and quickly found myself cross the makeshift log(s) bridge which was then followed by the intersection with the small path heading to Ellingwood Ridge. In winter this cutoff was nonexistent and so I was curious if in summer a foot trail existed and indeed, it did.

The trail from this point on continuously climbs. I had forgotten how relatively steep this trail is and it quickly had me sweating and working, though I kept a brisk pace. About 50 minutes in I popped some Advil to deal with the slight altitude headache. While it felt like my cardio wasn't too affected by the high altitude, I do usually get a slight headache on the first day of exertion.

Several sections I remembered from the April ascent in the snow and was intrigued to now see what they looked like without the snow. I tried to spot where the winter variation cutoff up the slope but it wasn't evident. Soon I found myself on new terrain and this lead into a beautiful and relatively flat meadow section which I thoroughly enjoyed.

The weather reports for today had looked pretty good for the morning with the typical possibility of storms in the afternoon. Thus far they were spot on as the skies were crystal clear and looking beautiful. 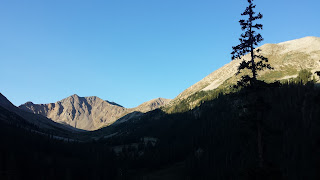 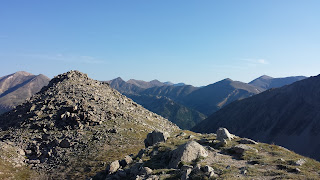 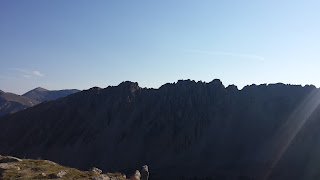 After the meadow area the climb begins again in earnest. There are a couple of sections of major switchbacks that begin the climb up to La Plata's northwest ridge. One of the sections works through a narrow grassy trough-like area. Before the last set of switchbacks is a small plateau area giving one a bit of a breather from all the ascending. The last switchbacks finally put you on the northwest ridge which I made at 8:25am. Here was where I reached familiar terrain once more from the April ascent.

I was hoping to find the trail much easier to follow on the ridge now that things weren't snow covered and to some extent this was true, but not completely. The initial section on the ridge was very straightforward but as it heads to the west side of the major headwall around 13,000 and into much more rocky terrain the trail became harder to follow. If one paid close attention it was quite do-able, but it definitely needed a keen eye to follow the true trail and not get caught on other dirt paths in the rocks.

The trail remained relentlessly rocky (go figure!) though much easier than it was in winter when covered with snow. There were a few very steep sections some of it on loose dirt which made for very careful work. The last bit of work on the summit ridge after the eastward turn at 14,200 went smoothly and I was on top at 9:27am making for a 2:47 ascent. This was about 3 1/2 hours quicker than the April "winter" time.

Weather was still perfect on top with little breeze and I'm guessing temps in the 50s. One of my goals for the day was not only to climb La Plata but get some high altitude time so I tried to be in no rush once on the summit. I also wanted to investigate the "East La Plata" summit and so I set out to do so. I had given myself the impression this was a relatively easy ridge walk over there. Once I began I found the humps and rocks weren't so flat as I had suspected. I made it about halfway over to the sub summit passing through some class 2+ terrain and then had a look at the remaining rock. There was what seemed a small gendarme in the way that was still likely class 2+ to pass and then the terrain climbing up to the peak which could have bordered class 3, at least from my vantage point. Being solo and not needing to do any of this I decided I would forgo it today. Its likely I overestimated and may still have found things less than class 3 but it was a day I just didn't need to take any chances whatsoever. 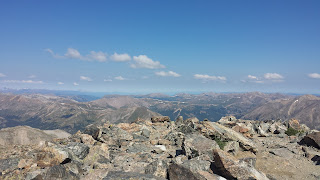 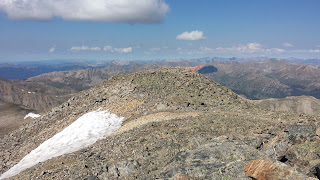 I headed back to the main summit and tried to converse with my wife on the phone while my phone battery gave me fits. As much as I worked to take my time I still ended up only spending 35 minutes on top. Its amazing how slowly time passes up there and how used to being in a rush I usually am on summits. I also had the place to myself which means I should have stayed even longer. Nonetheless, just past 10am I started to make my way down as another gal, hiking along with her dog, was starting to reach the top. 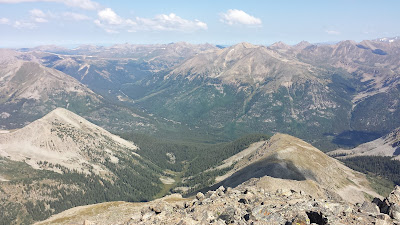 On the ascent I had passed 15 different people in numerous groups with only 2 people having summitted before me. On the way down I re-passed pretty much everyone I had seen with 2 of the couples having turned down and bailed on the summit as the weather started to deteriorate. I was honestly pleased to see folks like this who were cautious and respectful enough of the dangers of the mountain to not be afraid to say it just wasn't their day.

I made real good time on the descent, likely too good a time. I wasn't trying to run nor push the pace too much, and I had it in mind I didn't want to mess up my quads for the Pikes Marathon in a few days. Nevertheless, La Plata's trail and its steepness was more than I had initially bargained for. Not wanting to work at a snail's pace, and also getting caught up in a competitive moment where I wanted to roar down the mountain passed everyone I probably made a huge mistake in terms of pace. 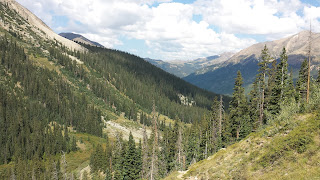 As I worked my way down I noticed I might be able to finish by noon and so foolishly made this my goal. It was 12:06pm when I made the car making for a 2:04 descent after the 35 or so minutes on top. The legs were feeling pretty good and for the moment at least I was really pleased with myself. The temp was still a very comfortable 53 degrees at the car. 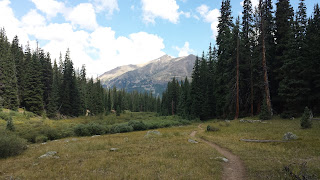 I did notice the clouds were really starting to fill in and to my amazement, when I was finally ready to drive away on CO82, I was driving no more than a minute when the shower began. On the plus side, my haste in the descent kept me dry and I beat the shower. On the down side, I would find out the next morning I had done some damage to my quads in the hasty descent and I would be sore for the next several days. This would give me great anxiety as to exactly how I would be able to perform on Pikes. In hindsight I was terribly regretting my decision with La Plata and underestimating what its steep trail would do to me. I knew my quads were perhaps more prone than others to this kind of soreness and yet I still let it happen at a most inopportune time.

This section in the trees intrigued me. April "winter" version
is on the right and it was a difficult passage at that time. The
summer August version is on the left.

Nevertheless, the La Plata climb was a success and a most enjoyable one at that. I do love this mountain and this hike. It is still a bucket list item to get my brother out here to look into an ascent of the classic Ellingwood Ridge.