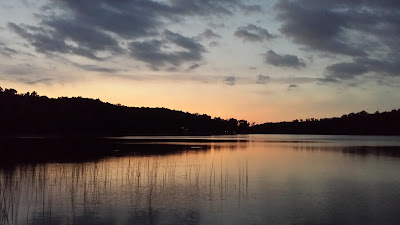 This trip report combines a trail-run of the Crooked Lake and Silver Lake trails along with a backpacking hike on the trails into Blind Lake for an over night camp.  I've been on all of these trails previously and today was just more fun on some of my most favorite local trails.

As many of my trail runs lately have been, this was a part of my training for the Pikes Peak Marathon in just around a month. I had done 18 miles yesterday between the trails at Indiana Dunes and the Waterloo DTE trail, and today called for a follow-up of 10 miles. I resolved to run the first 5 at home on my elliptical and treadmill to help avoid some of the miles in the heat. I had run into a problem yesterday because of excessive sweat and heat of leg chafing and so I was concerned how that would affect today's mileage. As I often do when driving over to Pinckney I stopped at Ann Arbor's REI and there I grabbed some BodyGlide to try on my troubled skin. Before this run on the Crooked Lake Trail I applied it and hoped for the best.

It was warm in the mid 80's today and sunny so that wasn't going to help the run either. I drove into the Silver Lake Parking Lot and found all of the lots were packed with beach-goers, and perhaps a few trail folk. As I had found at Indiana Dunes the day before, I was glad to be on the trails and not the beach given the crowds. I took a few swigs of Gatorade and then hit the trailhead near the beach.

It took a little while for the legs to loosen up and I also had to slowly make my way around a few slow but large hiking groups. The initial boardwalk was heavily grown over and I hadn't recalled ever seeing it like this, then again, I'm usually here hiking and running over the winter and early spring months. As I made my way around the Crooked Lake loop I found the legs feeling better and better, though of course, not 100% fresh.

Before having left the TH I also put on some bug spray. After yesterday's debacle over in Waterloo with flies hovering over me for 5 miles I wanted to avoid it today. Though I did have the occasional fly check me out, I think the bug spray combined with the warmer temps did keep them away for the most part.

As I neared Trail Junction 3 I had a decision. My GPS was just over 3 miles which meant I wouldn't get near my 5-mile goal if I simply followed Crooked Lake Loop. My legs were also tiring a bit and this also had me wanting to take that shorter way out. However when I hit the junction I got a burst of second wind and decided to just do the longer route and get the 5 miles in on the trail as opposed to potentially running 3/4 of a mile in the parking lots.

I headed south to junction 4 to take the Silver Lake finish. During this running I think I had about 14 bikes pass me, 2 runners, and half a dozen hikers. Honestly, at this later hour and with the temps I was surprised I saw that many people. Two of the hikers had large backpacks on and I asked them if they were headed to Blind Lake, and they were. I thought about them as I hiked in later and was amazed to find that they didn't arrive into camp until dark at about 9pm. I know they went the slightly longer approach than I did. I'm not sure if they did the Shortcut Trail or the entire northern part of the Poto Trail, but either way, they weren't moving all that quickly.

I finished my trail-run at the parking lot and quickly sought out a way to dry off. I didn't want to be drenched and sweaty to start my backpacking hike. I brought a simple change of clothes and a towel and hit the bathrooms at Silver Lake to change up. This helped cool me a bit and I took the time to apply some more BodyGlide. So far so good on that front. This was also the first time I found the concessions open there and so I took advantage of it to get a cold gatorade to replenish the electrolytes.

I was pretty quick in getting ready for the hike after my trail-run and hoping I hadn't forgotten anything in my car as I moved on to the trailhead. I was going really light this time around given the warm temperatures. I did still carry almost 2 liters of water as I didn't want to deal with the possibility of a nasty well-water taste at the Blind Lake pump.

For gear this time around I used my REI Quarter Dome 2 ultralight tent, instead of a sleeping bag I tried out for the first time my Thermolite Fleece Liner which shed much weight and space in my pack. I brought a change of clothes to sleep in (that wasn't wet and sweaty) and something dry to hike out in the next morning. The major item I realized I forgot was my mattress pad. I believe I realized that somewhere on the hike in and just had to chuckle. I would improvise somehow. For food I brought a spaghetti MRE which relieved the need to bring any cooking gear and also had some small snacks for the trails.

I worked the short southern route taking the clockwise direction on the Poto. Usually I got the slightly longer Shortcut route on the hikes in to Blind Lake but given the later hour and having run 10 miles I was ready to get in there to camp. I made quick work of the first 2 miles doing it in just under 20 minutes. This brought me to junction 4.

I knew it was a hilly 2 more miles from there. I was now sweaty pretty hard again because of the heat and the work and so any thoughts of staying dry were out the window. I could also feel the legs seeking some relief during those last 2 miles. I tried to keep drinking much as I could and put in a few snacks. Those last 2 miles were miles 31 and 32 over the last 36 hours. That is a lot of work. Nevertheless I kept up close to a 3 mile an hour pace. I did have about half a dozen bikers come by but saw no one else on the way in.

Before my trail run and the hike in I had stopped at the park office to reserve my Blind Lake site. They commented that most of the sites were taken, much to my surprise. This was the first time I had to reserve and choose one in the office upon arrival. I believe they said 6 or 7 of the 10 sites were already reserved. I looked at the map and decide #9 near the lake was best. I believe I have used that one before.

So upon arrival at camp I headed for #9 and decided I'd made a good choice. I never want the two sites, #7 and #8 I believe, near the outhouse and back from the lake. And all of the others were taken. I actually do prefer #9 as it is off the trail a bit as well.

I took my time setting up camp as the legs were really at their end. I left the rainfly off at first hoping to keep the tent inside as ventilated as possible. I setup my backpacking chair and enjoyed a rest. I heated up my MRE and enjoyed ever last bit of it that I could and it was nice to get some hot food in the empty tanks.

After supper I spent time reading and occasionally walking to the lake edge for a picture. I got a few wonderful sunset shots. At nightfall my neighbors (the slow hikers from earlier) at site #10 arrived and setup tent via headlamp in the dark. I knew there was a good chance of storm overnight so I put the rainfly on and proceed to read a bit more before heading to bed.

Around 2:30am I was woken up by the storm with thunder and lightning coming around me. It did rain, hard for a little while, but didn't seem to last terribly long. When it all had seemed to pass I got the feeling it could have been much worse. Never heard much in the way of strong winds.

I finally awoke around 7:30am and felt pretty good. Despite the absence of my mattress pad, I had found a pretty good bed of leaves to set my tent over and this really did add a little something at least. For breakfast I tried an organic CLIF apples and cinnamon snack. It had a terribly nasty texture and I resolved never to try those again. I also downed a granola bar and some water.

It was just after 8am when I hit the trail out. I was wanting to get back home by 11am so I could still work a full day today. I made quick timing on the hike out except for a 10 minute stop to look for a trekking pole tip I had lost. When I hit junction 4 I decided to take the Crooked Lake finish which I hadn't done yet and enjoyed the nice trail in that direction.

Another successful Blind Lake backpacking trip. I really need to get my oldest son along with me next time, who I think would really enjoy it.