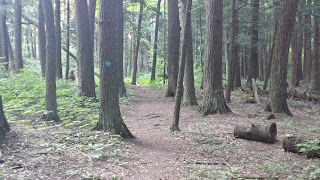 In my preparations to visit the Porcupines I had heard the Overlook Trail mentioned in a few places as having wonderful views. It also fit the bill length-wise as a good morning trail-run that was also close to our camp at Union Bay. I made the short drive from camp over to the Government Peak trailhead where one can pickup the Overlook Trail. 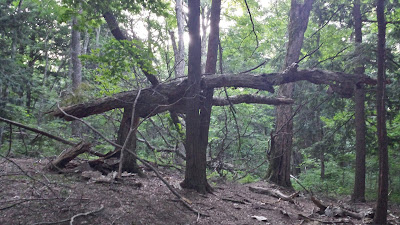 The beginning trail heading up from the trailhead is incredibly rocky, so much so that running is almost hazardous with the risks of turning an ankle. Not long after the junction with the Escarpment trail's end the trail improves quickly becoming a standard dirt trail in the forest. I noticed early on the ending point for the Overlook trail which came quickly and wasn't signed. I decided to play it safe and wait for the more prominent junction which, by my GPS watch, came about 6/10s of a mile in.

There was only one muddy section early on which was fairly easily avoidable and then the trail began several hill climbs through beautiful sections of forest. The blue blazes were in good spots everywhere to make things easy to follow. There were a few downed trees that had to be skirted which, when combined with the hills, made for a very slow running pace.
I didn't realize until after I had looked at my track in hindsight how much the trail had climbed and what directions it had taken me. When I made it to the Overlook it did offer a pretty decent view of the Porcupines. There was a bench there I hopped up onto for a better picture. That was about the only place on this entire trail where the views opened up through the forest. What's also interesting is that the Overlook area is actually the summit area of the hill that is the ski hill here at the Porcupines. Of course the ski area is still a ways east of where I made it and I didn't see it, I believe there was a faint dirt trail heading off in the woods in that direction. 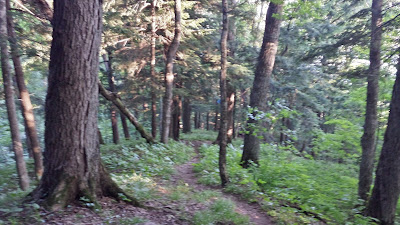 After the Overlook the trail wound around on the top of the hill there and then worked its way to the backside of the slope for the descent. One thing I noticed on the "backside" is that the trail quality progressively declined. As I neared the bottom of the descent and into the last 3/4 of a mile heading west to the main trail there were downed trees everywhere. It was really slow going and in one spot I really had to hunt to figure out where the trail had gone. This is a rare area where I would recommend against doing the whole Overlook Trail loop and instead do the climb to the Overlook and descend the same route. I found this trail to also be longer than listed on the signage. Where the hike as a whole seemed to list at about 2.75-3 miles my GPS came out and said 3.41 miles. And it is rare, if ever, for the GPS to give a longer distance reading in such forest running.


Track:
I have a track and waypoints from the hike all contained in a KML file that you are welcome to download and use (at your own risk).