Porcupine Mountains: Summit Peak to Lake of the Clouds Overlook via Mirror Lake 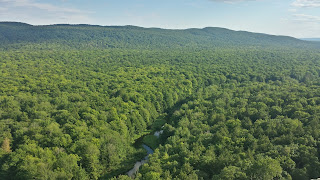 With two days at our disposal at the Porcupines we decided a good first day hike would be the Summit Peak hike. For my 3 young boys they were almost all hiked-out from 3 days on Isle Royale and the Summit Peak hike would be a short one. When my father and I looked at this we decided we could do that and perhaps then a little extra.
We had looked at the possibility of doing the Summit Peak loop which involved hiking Summit then north to Mirror Lake and then back south along the Little Carp River Trail. Then we realized it would be an instant classic to hike point-to-point north to Mirror Lake and then on to Lake of the Clouds. To make this happen we would need a pickup at LOTC. We worked this out by sending the boys, my mother and Sarah back to the car from Summit Peak and then on to the LOTC overlook to grab us. We estimated 2 hours for this hike from the moment we separated atop Summit Peak and so set a 6:45p pickup.

The hike up Summit Peak was on a fantastic trail. A nice wide highway of a trail with some brisk elevation gain at the start. It then hits an overlook with some of the best views, and from that point onward it is on a boardwalk to the wooden tower at the Summit. The tower is helpful as the summit area is all wooded and it gives you a bird's eye view from the tops of the trees, literally.

We departed from the others and started down the north side of Summit Peak on good trail that progressively narrowed as we descended. We didn't carry much as we set out on our own. I had my light Osprey Rev6 pack with a liter and half of water, Dad had some Gatorade of his own. We also carried a two-way radio so that when we got close to the LOTC overlook we could talk with the rest of the group and make connections or changes as necessary. The one thing we didn't carry but in hindsight wish we had was some food. 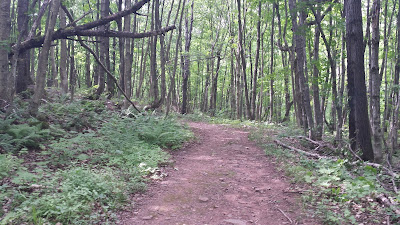 When the north Summit Peak trail ended with the South Mirror Lake Trail it turned into an old mining road for about half a mile. There were some muddy areas in this section with plenty of mosquitos so we kept up the pace. The trail then turned northward towards the lake and in here we were really impressed with the changing tones of the forest and the beauty of it. We passed a few backcountry camping areas and remarked how interesting it would be to come back in here again. 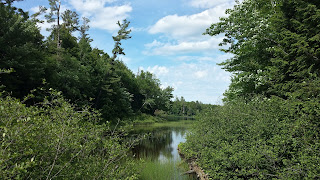 Mirror Lake offered a number of beautiful views as we worked our way around it. The signage was good to make it easy for us to pickup and follow the North Mirror Lake trail. We ran into a nice family at one of the cabins on the north side of Mirror Lake and it appeared to be a neat activity to hike in there as a family.

A little over half mile north of Mirror Lake we hit a marshy area where a boardwalk helped carry us over the muck. We were pretty sure that boardwalk was longer than any even we encountered on Isle Royale, may have been a 1/10 of a mile long.

About a mile after the marsh and intersection with the Government Peak trail began the downward descent. We actually had to slow up in here a bit as my partner has older knees that don't like steep hills. Towards the bottom I snapped a few pictures of an area where a stream had seemingly cut a mini canyon in its descent. 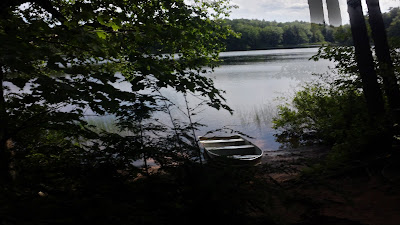 When we bottomed out at about 5 miles in we were in mud for awhile having to take our time moving through one messy section after another. I realized that we were not going to make our time schedule at the pace we were moving. As we neared Lake of the Clouds we passed a group at one of the backcountry sites and then we reached the foot bridge which heads over the drained of the lake. There were three guys sitting precariously on sides of the bridge trying to filter water here. All throughout this lower section the mosquitos were just terrible. 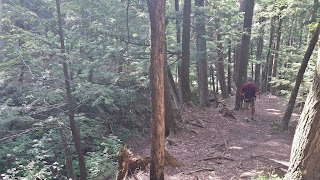 After the foot bridge the trail begins a swift climb over good trail to gain the Escarpment trail, and then over a quarter mile heads over to the Lake of the Clouds overlook. In here we made radio contact with the others to let them know we were running late. Conveniently they had also arrived late for the pickup and my mother and middle son were on their way to meet us at the overlook from the parking lot. Upon arrival we spent some time grabbing pictures of the beautiful Lake of the Clouds and then headed out. 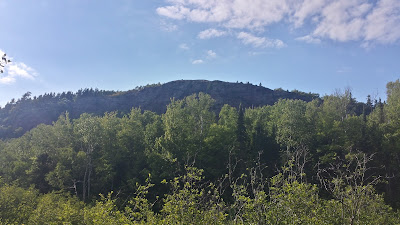 This would be a fantastic hike at a less buggy time of year and it had enough views and beautiful changes in scenery to be worthwhile. 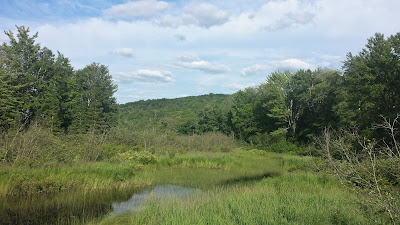 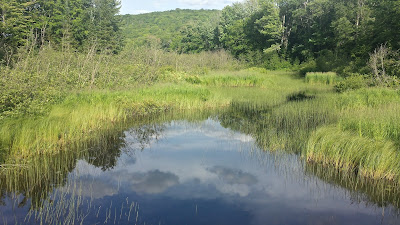 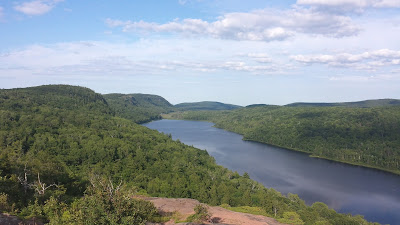