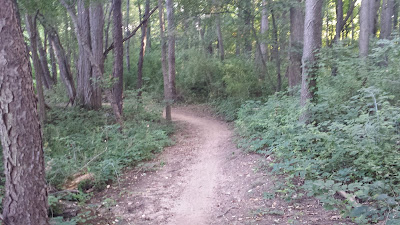 This report is in part a continuation of the Indiana Dunes trip report of July 16. As mentioned in that report I was seeking to get in 18 miles on trails today as part of my training for the Pikes Peak Marathon. I got just over 12 miles in at the Indiana Dunes and then it was time to hit I-94 and continue my drive to southeast Michigan. I had heard previously about the new trail in Waterloo Rec Area and decided this might be the perfect time to stop in to check it out. 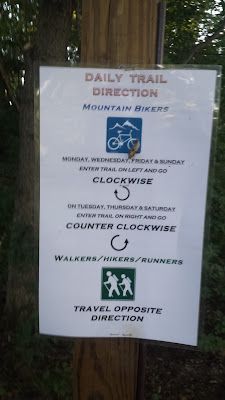 This trail has been funded by the DTE Energy Foundation and is the first in a series of four mountain bike trail loops to be installed in this area. This one has been completed in just the last year. The trailhead was even marked on Google Maps already which made this an easy find to get started.

When I pulled in the parking lot I found there were emergency vehicles with lights on. Apparently a biker (possibly runner?) got in an accident and injured and they were called in to help. It seemed they were just wrapping things up when I arrived.

The trail is a 5-mile loop as it stands right now. Given its design primarily for mountain bikers it is a trail that winds around on itself a lot which means the GPS has a very difficult time giving a true reading of distance. Oh well. I saw signage at the trail start with prescribed directions for both bikers and hikers and interestingly, it would change depending on day of the week. Today I was in the clockwise category as a runner. 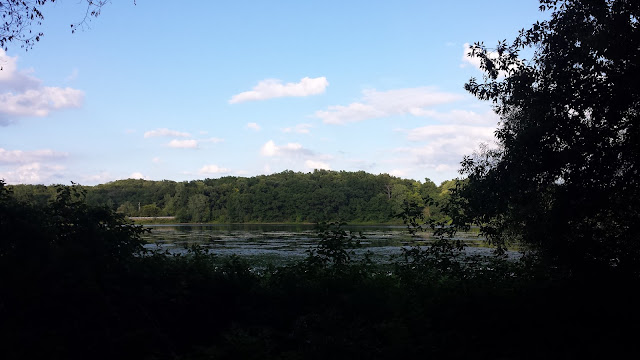 It was evident most of the way this was a new trail as everything was still in pristene condition. The mountain bikers had even worn a nicely compacted path in the dust of the trail. I was probably passed by a dozen or more bikers one of the groups passed me twice doing the loop a second time. It was nice running with frequent and small ups and downs and winding corners. This is a good trail to not wear headphones on and to be alert constantly for the oncoming bikes which were going pretty fast. I would always move out of their way upon seeing them.

The only big downside on this trail was the bugs. I was constantly inundated with flies hovering around my head. I had taken my shirt off, primarily because of sweat, and felt like a propellor plane constantly swinging it around to keep the bugs at bay. With this constant nuisance I didn't stop much and tried to keep moving. The trail offers the occasional view of lake and meadow but is primarily in the woods. If I lived nearby this would certainly be on my list for a regular 5-mile training run center. I look forward to the newer mountain bike loops opening in the years to come.