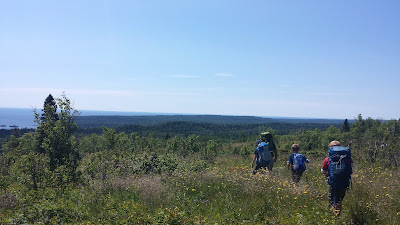 One of the nice things about staying in the shelters on Isle Royale is you don't have to pack up a tent in the morning. Though it didn't rain on us the previous night, we still enjoyed an easy morning today not having to be in any hurry and not having to worry about gear at all. The morning sun had us going shortly after 7a but we were able to really take it easy. It was about 8:15a by the time I got the boys going for some breakfast. Of course breakfast was quite simple on this trip. Since we were doing the MRE's for our bigger evening meals we opted to not bring along the camp stove or pots. This worked well for weight but it did remove our ability to do hot water for chocolate or oatmeal. With the warm weather we had on Isle Royale that really turned out for the best.

We brought along fruit bars and cereal bars as well as a Oatmeal Walnut Clif bar for breakfast along with eating up whatever other snacks we felt like in our packs. Dad also had to spend some time taking apart the fishing lines from last night but otherwise our morning packing was quite simple in the shelter.

It was 9:40am when we finally hit the trail with our initial goal being Mt. Franklin on the Greenstone Ridge. For the first 6/10s of a mile or so we were retracing our final steps from yesterday in getting back to the Mt. Franklin trail and then taking it to and then past the junction with the Tobin Harbor trail. Our real big goal for the day wasn't just the hiking but to see a moose. We were told upon arriving on the island that there were only 2 wolves left but over 1300 moose. We thought our chances of a moose would be pretty good. Heading away from the coast, past ponds, and up to the ridge seemed to present our best chance of wildlife. 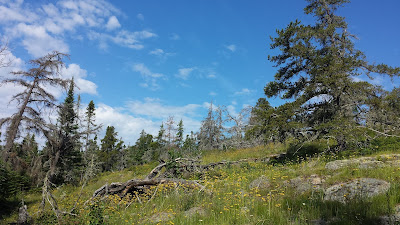 Before and after the Tobin junction the trail heads through a marshy area with extended boardwalks. These of course are also by far the worst mosquito areas where for the most part, you just keep your arms and legs moving and don't stop for anything. There is also an interesting fall danger on a number of the boardwalks where if you go off you're like to land into 3-4 feet of marsh water. We didn't want to test that estimate.

After the marshes the trail climbs a bit up onto an open area with some rock slabs. We were so thankful as the bug volume diminished quite well. This provided a great place for us to take off our zip-off pant legs to account for our getting plenty warmed up. We actually had to be somewhat careful in route-finding here to look for a few cairns and not lose the trail. 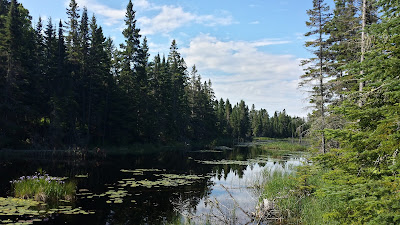 At about 1.5 miles in from the morning camp we worked past a beautiful pond where we *really* hoped to see a moose, but no success. Jonah was able to spot a beaver lodge in this area however which proved to be one of our better nature sightings on the trip. After the nice pond is where the trail really begins the climb to the ridge. In 7/10s of a mile it climbs about 350 feet, definitely steep enough to offer a workout for hikers carrying backpacks. Through all of the hiking the mosquitos reminded us of their presence so we usually had motivation to keep moving. The workout was hard enough it really had the boys challenged and hoping and asking for when we'd be hitting Mt. Franklin. 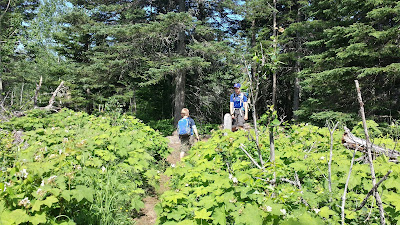 Much to their dismay, when we hit the ridge around 11:20a we found the signage that Mt. Franklin was actually another 2/10s of a mile to the southwest on the ridge. I knew this ahead of time but didn't have the heart to tell them. At least we had gained most of the elevation already, right? At the trail junction upon gaining the ridge I walk about 40 yards onto the Lane Cove trail to see if any good views would pop up.

I was so very curious to see what hiking on the Greenstone Ridge would be like. I was hoping for plenty of wide open expansive views and not quite so dense foliage. We would end up getting both. Our first stretch on the ridge from the junction was fairly thick brush, we even joked about the need for a machete. Then we hit an open section though no views yet. Finally, about 18 minutes after having left the junction we hit Mt. Franklin. 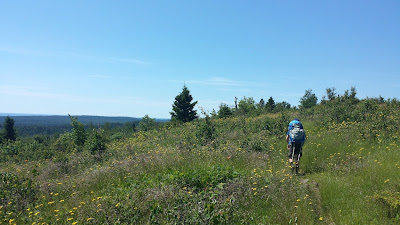 This area provided some of the best views of the entire trek on Isle Royale. We could see Canada and the vast area of inland lakes and ridges that are the northeast side of Isle Royale. We spent a good 35 minutes up there and ended up eating lunch. One of the highlights of lunch was I carried a log of summer sausage to give us a taste of fresh, non-bar food. I've found on past backpacking trips that certain summer sausages will keep for a few days in the backcountry, though with this one I think we were beginning to push its limit. I think my planning didn't take into account the much warmer night we encountered on Isle Royale compared to the cooler mountain nights in Colorado. 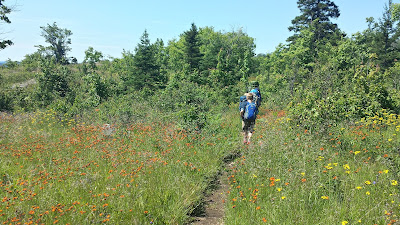 From Mt. Franklin we would get a 2.3 mile taste of the Greenstone Ridge and it really was enjoyable. The mosquitos were much less up there although the black flies then made their first appearance. The ridge did begin to provide some more open expansive views mostly to the south of the greater Rock Harbor area and the south side of the island. We did run into a few different hikers, mostly dayhikers on the ridge. We even passed two areas of matted down grass where it seemed evident that some backpackers had hunkered down in tents for the nice. This did leave us wondering what folks did do when hiking the entirety of the Greenstone Ridge. In looking at IR maps it seems there are places where campgrounds are within a mile of the ridge. But depending on one's itinerary it would also seem reasonable an evening come with no clear place to camp. 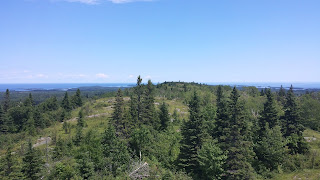 As we neared Mt. Ojibway the watchtower came into view. This proved helpful as a visual goal for the boys to shoot for in motivating them to continue forward. I think the boys did some of their best hiking on the Greenstone Ridge because of some of the more open views and sights to see ahead. Jonah and then Seth especially had their mental struggles when the hiking was trudging through thick forest and brush. 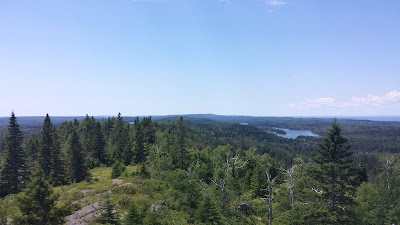 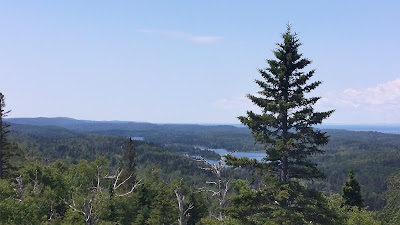 At Ojibway we ran into half a dozen people who were either sitting in the shade under the tower or climbing it for views. You were able to climb most of the way to the top of the tower but the actual top, which appeared to have various instruments, was closed off to the public. It was worth the easy stair climb up for the views. It also didn't hurt to have a nice cooler breeze up higher as the ridge hiking in the sun had become quite warm for us. On Ojibway I treated the boys each to a GU energy gel that I had also promised as motivation to them. They really enjoyed this extra boost. 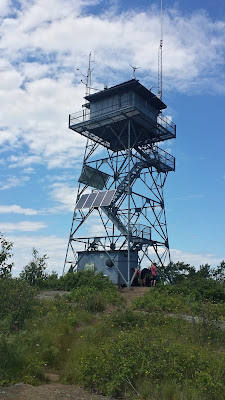 The hike down from Ojibway on the Mt. Ojibway trail was a surprisingly nice trail. The descent never got all that steep and the bugs weren't too bad except in an initial marshy area which extends from the east end of Lake Ojibway. We found a brief climb heading up from the marshy area and then another descent to a bridge over Tobin Creek. We were again hoping to catch a view of a moose in these parts but it just didn't happen. Another 120 foot climb greeted us to gain the ridge near Ransom Hill and then finally it was all downhill to the camp. The final half mile was a nice trail with mostly thin but dense forest which provided some views through the trees. 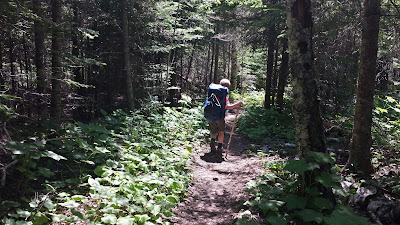 It was 2:52p when we finally hit Daisy Farm camp. The trail brought us into the northeast side of camp near some shelters a little deeper into the woods. We worked our way through camp to the shore trail where we dropped our packs at shelter 11. We walked over into Daisy Farm proper and I loved the look of it with thin dirt trails amidst the thick daisy field. We scouted out the other shelters as almost all of them were empty. Luke really liked shelter 1 as it was situated on a beautiful section of trail but it was a bit further back from the lake. The rest of us liked shelter 12 and we ended up moving packs to it. It had a nice view into the lake and was just off the main trail. 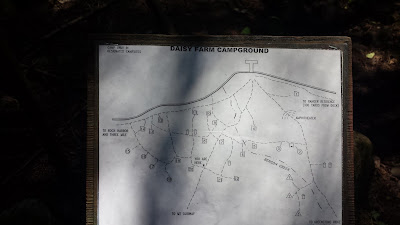 Having arrived at a nice hour in the afternoon we were really able to take it easy for the rest of the day. I spent time reading while the boys fell in love with a small section of beach by the Daisy Farm dock where they spent a number of hours building sandcastles. We did more MRE's for supper and spent time on the docks pumping water and reading away from the bugs. 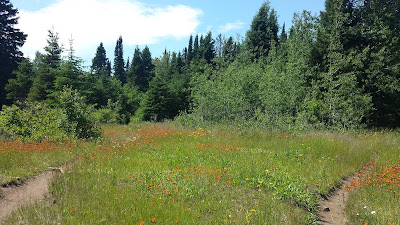 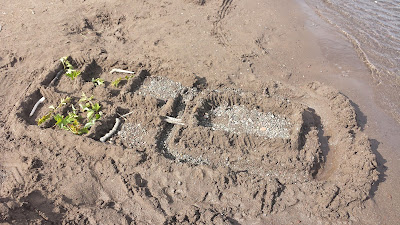 When we were reading signage at Daisy Farm we noticed that that evening at 8pm Candace Peterson would be talking at the dock about the wolves and moose of Isle Royale. We decided to attend. She and her husband Rolf are the experts on the wolves and moose here and have written books and done research via Michigan Tech for a number of decades. They had bones of each animal to share and describe how they can use the bones to understand the health and other developments of the animals. They were big proponents of importing new bloodlines of wolves to Isle Royale and pointed out the NPS is still hesitant to take on such an involvement. They spoke for about 45 minutes. 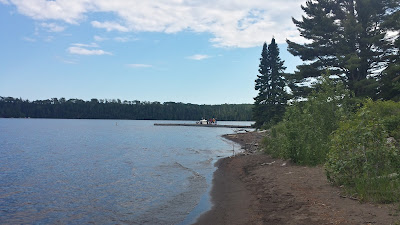 One more interesting note from our last night on Isle Royale was to point out how interesting it was to have sunset happening right around 10pm. It really gave us long days to have so much daylight for so long. Of course compared to time we spent in Alaska and the Yukon a number of years back where sunset was more like 2am this is nothing, but compared to home it was a big change.


Track:
I have a track and waypoints from the hike all contained in a KML file that you are welcome to download and use (at your own risk).