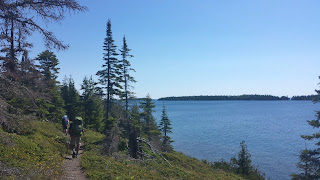 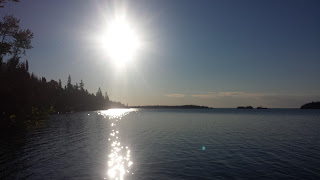 This day was our final one on Isle Royale. It was also a rare early wakeup for our extended U.P. vacation. We knew the gameplan for today was hike 7-8 miles out to Rock Harbor and we had to arrive by 2:15pm. Actually, we really wanted to get in between 12 and 1p to give us time to grab lunch and relax.

We were up at 6:45a to get some breakfast and our packs loaded up. It was a beautiful clear blue skies morning and the temps were already quite nice. We moved pretty quickly in getting ready for the trail. We wanted to be gone by 8am with the hopes of a 5 hour hike. It ended up being 7:37a when we hit the trail. 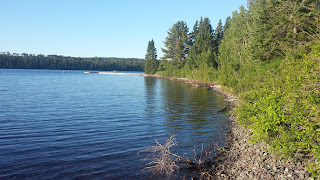 The mosquitos seemed to find us right away as we got rolling along. We were also hampered by large sections of muddy trail. When we were hiking Tobin Harbor on Friday we had heard someone in passing mention mud near Daisy Farm so we were wondering just how bad it would be. Well it really slowed us down and we would hit sections of mud that would seem to be endless. It was a real struggle to find ways to work around it without getting our shoes completely wrecked. I think everyone though had one step or two that put the shoes right into the muck. 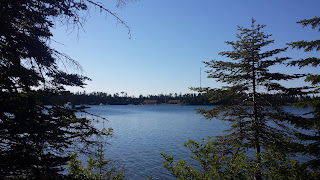 By about 2 miles in as we neared the halfway point to Three Mile it started to lessen a bit. Around 2.5 miles in the trail breaks NW for a bit at a jagged point on the coast and it moves inland slightly through a dense forested section. The bugs were nuts in here and so we had another "just keep moving" sort of section. One boy had to go to the bathroom here and we really made an urge to hold and keep moving out of there. 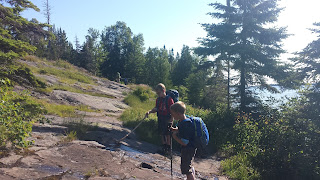 With today being one big long day we had to find ways to break it up mentally for the boys and ourselves. Yesterday was easy with highlights on Mt. Franklin, the Ridge, and Mt. Ojibway. Today didn't quite have the same appeals with 7 miles of similar looking coast to hike. We used Three Mile camp as a nice halfway point and when we did arrive there about 10:17a we stopped on the docks for a good snack. We spent about 15 minutes there trying to cool off a bit and get a reprieve.

We had some debate about whether to take Tobin Harbor trail back or to try the Rock Harbor trail having considered the advice of the local on Friday. I really wanted to try the Rock Harbor trail just since it was new for us. We did opt for that and in the end I think we were glad we did. It certainly did have more ups and downs than the Tobin Harbor trail, and even some rocky sections which slowed us up a bit. It was also a bit more in the open at times which on the down side brought on more heat and sun, but on the plus side less bugs and better views. 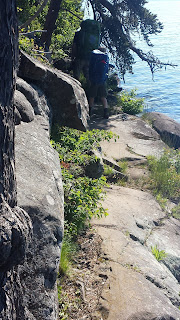 We did get to see some wildlife this morning, some of our best sightings on the trip. No moose though. I believe it was Seth who spotted a very tiny young snake which we snagged a picture of before he could slither away. And then it was Jonah, who was our resident wildlife expert who spotted a snowshoe hare ahead of us on the trail. We spent a number of moments watching him and grabbed a picture as well.

In the hiking after Three Mile we used the Suzy's Cave trail as another halfway point. When we reached that stop at 11:15am Dad, Luke and Jonah hiked up the short hill trail to get to the cave. I was occupied with Seth who decided he had to go to the bathroom, and not the easy way. I was a little perturbed as we had just had the outhouses at Three Mile just 45 minutes ago, but never the less, while the others hit the cave, Seth and I found a secluded place to dig a 6-inch hole to take care of business. While I was helping Seth we could hear several small birds chirping their little heads off and we looked up and saw at the top of a dead tree a nest with the little birds in it. 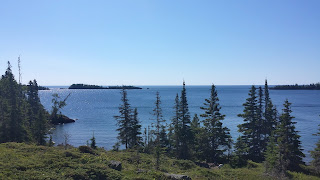 After Suzy's Cave we really worked it to get the rest of the way out. I think we went nearly non-stop for the last mile and 3 quarters with a strong desire to get out and get some real food. Its always interesting on the hike out, no matter where it is, or how long you've been out. There is something psychological about knowing you're near the end and the mind just gets into this mode of wanting to be done. We passed through the Rock Harbor campground and then, just like that, we were back at the harbor at 12:20pm. We were most pleased to be left with a fair amount of time to relax before the ferry. 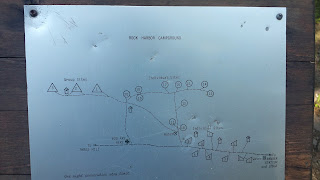 So, as it always is at the end of a backpacking trip, the first order of business upon departing was to find food and beer. We dropped our packs in the dock area again and made the walk around the harbor to the Greenstone Grille. We grabbed a table there and commended with ordering some beer. They had a number of brews on tap from Keweenaw Brewing Co so I tried the Widow Maker Black Ale and Dad tried the Red Jacket Amber Ale. Both were great, the black ale was especially smooth and a good tasting dark beer. Foodwise, the young boys tried pizza (which was pretty average) while I had a very tasty Greenstone burger. It felt good to sit back and carb-load. 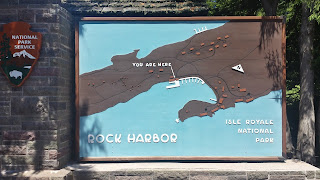 After our lunch we went back to the Visitor Center area and grabbed some more ice cream and Mountain Dew for dessert to sit out and wait for the ferry to depart. In our free time I browsed around in the ranger's office and the ranger gal watching the desk noticed my North Country Run shirt which I had gotten from running their marathon in 2015. She said she was there volunteering in 2014 and was supposed to run in 2015 but then got the NPS job on Isle Royale. It was interesting to talk trail-running for a bit with a nice park ranger.

Come 2:30p they got us loaded on the ferry, which was not full, and we bid our good byes to Isle Royale. While the mosquito-filled thick vegetation style of hiking on Isle Royale isn't quite our first love as is the hiking of Colorado, we would certainly still enjoy a return to the many unexplored wonders of the island. If for no other reason, we still need to find us a moose.