When I first gave a look at McLain State Park and possible trails to run I really didn't find anything at all. I did some searching around and didn't see anything nearby. I let it go until we had arrived at the park itself. Upon arriving I was looking through some of their literature and came across the Bear Lake Loop. This sounded promising. It wasn't long and I even noticed the trailhead signage which was across the road from the main entrance to McLain. With a short plan in mind to check out Bear Lake I decided to give it a go this morning before we moved on to the next park. 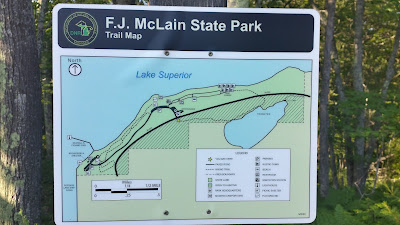 I jogged the camp road from our site out to the main entrance and the Bear Lake trailhead. I snagged a photo of the map and noticed there were some basic trails running through the west side of McLain as well heading out to a beach and the lighthouse. The trail heading into Bear Lake was nice and wide and for the most part flat and smooth. It made for great and easy running. It was only a few minutes and the lake came into view. At 2 or 3 locations there were small use trails breaking off from the main trail to get to the lake. I stopped when I arrived at the fishing pier where there was a bench and a dock extending into the lake. The Bear Lake trail continued on to the main highway again, M203 and I noticed where it continued on the north side of the road.


That trail segment was short and ended at the dirt roads on the east end of McLain State Park. From there it wasn't evident that the trail really continued and instead it just became the camp roads of McLain. I followed them through camp again to the day use area of McLain where I began looking for the next set of trails. The map showed two parallel trails that worked from the day use area out to the west end of the park near the Portage Lake Canal.

I found some boardwalks heading up to a pavilion on the west side of the day use area and from there a clear trail into the woods. This appeared to be the northerly of the two parallel trails. It was easy to followed and I had noted that there were a number of cutoffs heading to the southerly trail and to the beach, but for the most part it was fairly straightforward following the main trail. The only challenge in here were several sections of trail that became very sandy and slowed the pace down. I followed this out to the parking lot at the west end of the parking exiting near a basketball court.


From there I found another basic trail heading out to the beach with beautiful darker sand, though it was very loose and difficult to run. I spent some time exploring the beach and then hiked/jogged to the end of the beach for a view of the canal entrance. 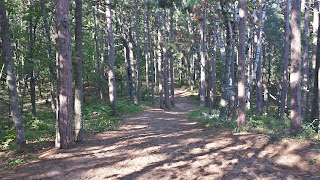 There were some basic dirt trails in the woods here at the end and I followed them back to the parking lot. I carefully searched out the southerly of the two parallel trails and followed it pretty easily back to the campground.

For a small park as this I ended up getting just over 5 miles of pretty decent running. Each of the trails themselves would make for a nice short family hike or an easy trail run for sure. 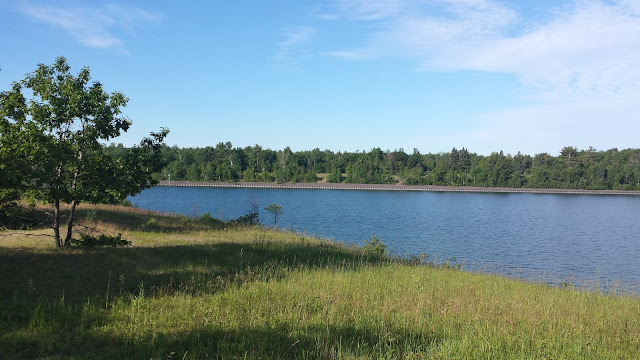