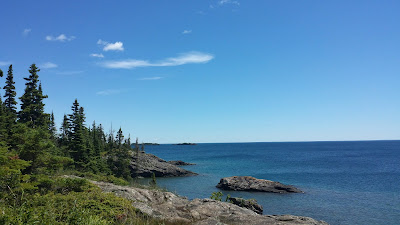 We decided to take the Queen Royale IV as our vessel to Isle Royale largely due to scheduling. The Ranger III out of Houghton is cheaper, but it only runs on certain days and they didn't fit our itinerary. The QR IV is more expensive but runs more days and we really had a great experience with them as a largely family run business. The Queen Royale leaves Copper Harbor at 8am and is scheduled to get in about 11:30am on Isle Royale. Ours arrived about 15 minutes late. Mom and Sarah came along to daytrip along with Dad, myself and my three boys. The return ferry leaves at 2:45p, and while coupling the need to be 30 minutes early for it, plus the orientation upon arriving on the island, Sarah and Mom really had about 2 hours to work with on the island. 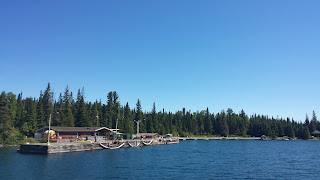 When we arrived at Rock Harbor they took all of the backpackers aside, while their packs were being unloaded, and a Park Ranger gave an orientation on Leave No Trace principles and a few specifics about the island. After that a leader from each party was to go into the permits office to make sure everything was taken care of. We also asked the Ranger if there was something we could do with our large packs while we tried the Stoll Trail and were told, nothing official, but we could take our chances leaving our packs there on the docks. She did mention that most people would likely leave the packs alone, it would just be little critters we may have to worry about We decided to take our chances and drop the big packs. By the time all of that was taken care of it was past quarter after twelve. 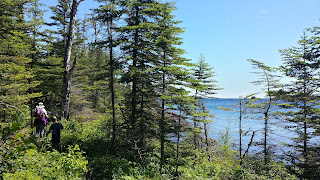 In the weeks leading up to our Isle Royale trip it was merely by coincidence that I came across an article from Backpacker Mag that was describing the 100 best miles in the National Park system. It just so happened that 4 of those miles were the Scoville Point trail on Isle Royale. This left us excited to give this a go on our short trip to I.R.

We had also debated in our planning whether it would be worthwhile for me to hike quickly down to Three Mile Camp to reserve us a shelter/tent site. We had surmised that I could quick hike it and then trail run back to rejoin the group on the Stoll Trail. We're glad we didn't opt to do this as there ended up being plenty of availability at Three Mile, that, and the Rock Harbor trail was much more time consuming than we would have originally guessed.

Now, on to the Stoll Trail. We had all of the pertinent Isle Royale trails mapped out on the BackCountry Navigator app on our phones so we knew starting wouldn't be difficult. To start we followed the pavement around the harbor and then followed a sign to the northeast from the harbor into the trees a bit. We followed the pavement past short trails to many of the lodge buildings til it eventually became a dirt trail. 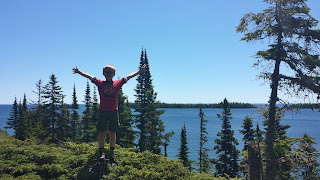 Here we would get our first taste of Isle Royale trails. We were surprised by the thick vegetation on the sides as well as the boardwalk sections working over marshy terrain. The mosquitos were definitely out so we quickly went to the bug spray. Occasionally we would be treated to views in openings to the straits between the island proper and the surrounding small islands. 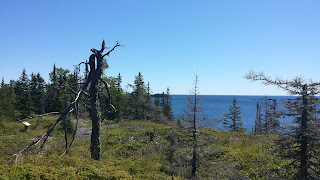 We were fairly slow going but enjoying the progress. About a mile in we hit an opening with some slabs to walk across. There were also a few signs explaining bits of the flora around us. At the end of this slab area the shortcut trail broke off at a signed junction. The group made it about a half mile further along the trail when the clock dictated a turnaround. I wanted to see Scoville Point either way and so I ran ahead and jogged the remaining trail all the way out to the Point. Along the entire trail there were very few ups and downs and no real hills to speak of. Nearing Scoville Point the last 2/10s of a mile were all in the open and working on slabs so it was important to watch your path for the return trip. I took a Photosphere out at the point and a short video to savor it for the others in the group.

I worked running the trail back seeking to catch up to the others passing a handful of groups that were still heading out to the end of the Stoll Trail or the Point. I caught up with them about a half mile from the Harbor. We were certainly pleased with this trail, and if we had a chance again we'd hope for more time to have done the northern half of the loop. Upon returning to the harbor we had time to raid the snack shop for ice cream and Mountain Dew while Mom and Sarah waited for their ferry to return. 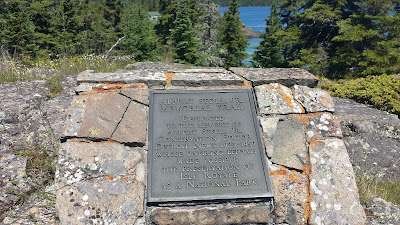 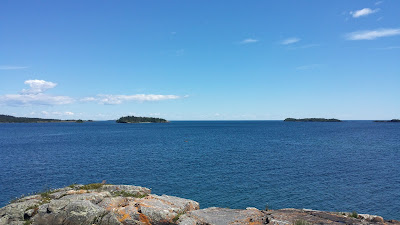