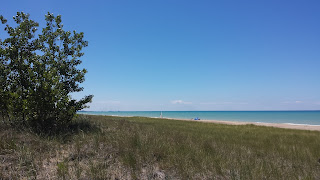 This Trip Report includes details from three separate trail runs all on the same day in Indiana Dunes National Lakeshore/State Park.  With a plethora of trails to choose from I think I was fortunate, after having done some research to settle in on some of the more quality trail choices available at Indiana Dunes.  I was able to hit these trails while driving home from Chicago to southeast Michigan and Indiana Dunes was right on the way.  I hadn't been there since my college days when I came camping with some friends.  It also seems I had picked a great day to come out.  The crowds were building fast upon my arrival, though I would hardly notice during my time in the Park.  While the beaches were jam packed with people the trails were sparsely populated. Yay!  When I left the park around 3pm the line of cars to get in was astounding! 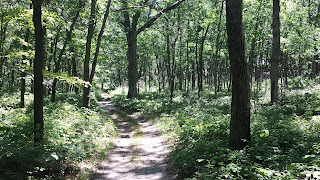 In doing some reading on the internet I had found that Trail 9 is described by some as one of the best trails in all of northwest Indiana. The route is a loop that heads out from the Dunes Nature Center that runs along the backside of a ridge on the way out and then hits the front side running past a number of Dune Blow Outs on the return. 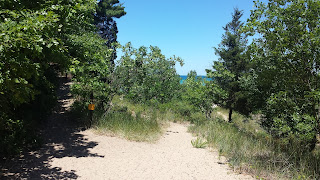 Most all of this trail was very runnable. The trail was sandy most of the way and alternated between good hard compacted sand and dirt and loose fill-up-your-shoes type sand. The first 0.85 miles of the trail gets repeated as there is a junction that begins the actual loop at this point. I chose to run it counter-clockwise heading into the woods first. The section in the woods on the way out was beautiful. Ran by a number of people trying not to startle them as I came up behind. When the trail makes the northwest turn to head towards the lake a small spur trail heads off with beach access. 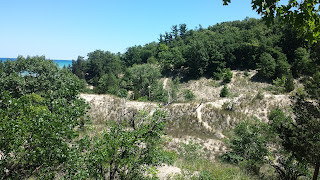 This begins a section of sporadically wonderful views peaking through openings in the trees to see Lake Michigan. I would stop at a few spots to snag pictures. When the trail hits the Beach House Blowout area it makes a hard left to attempt to hug the upper ridge of the Blowout. The trail winds around in here with notable spurs heading down into the Blowout. It passes through a beautiful tall grass area which was the (altitude-wise) high point of the entire trail and then hugs a sandy section to the south side of the Blowout. From there it was a hard left turn down hill to leave the blowout. Very quickly the trail hit the junction and then it was a return on the initial trail back to the nature center.

One of my goals at Indiana Dunes today was to get in 18 miles of training. I am still in progress for training for the Pikes Peak Marathon in August. I didn't plan to get all 18 at Indiana Dunes but with the trail choices I did make I had a goal of 11-12 miles. Choosing Trail 10 served primarily the purpose of distance. It appeared to be more flat and also had a 2+ mile beach component to finish. Little did I know that would be the most grueling section. 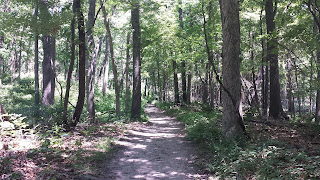 The trail, like Trail 9 began at the Nature Center. I started the same and had to follow the signage to ultimate get going on Trail 10. It was nice and wide to start and easy to run. I passed a few people early and then it would be awhile before I saw another soul. Just under a mile in I found the Bird Observation Tower which was on the maps but found it to be in disrepair. In fact the stairs leading up to it were boarded up. It was an otherwise beautiful area with varying types of trees and I imagine the tower would have provided views into the expansive nature preserve. 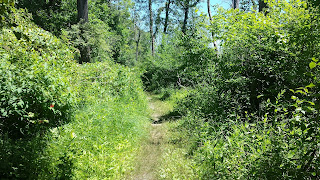 The bulk of Trail 10 hugs the back side of the Dunes and remains off their slopes so it remains a fairly flat trail. Towards its northeastern end the trail heads along a couple of boardwalks, one very lengthy, to attempt to avoid any muddy, marshy areas. There was a few trail sections in here where grass on the trail was starting to thicken up almost obscuring the trail. In here I saw a sign along the side labeled Paradise Valley and this was a flat forested area with thin shorter brush and plenty of beautiful hardwood forest. You could see further in here than in most places giving it a nicer view.

After Paradise Valley the trail makes a hard left to head northwest towards the beach. It climbs up and over the only main hill on this trail and then opens up into a beautiful view of the beach. There were a number of people down at the beach just in this area, I was curious if they had walked several miles to get here or if there was a closer access.

Here I captured a Photosphere/360 Photo of the area. It was pretty sweet. 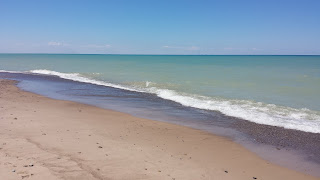 Running along the beach proved to be a real challenge. It was hot and sunny and so I was downing my water constantly. It was also impossible to find consistent footing in the sand. I had really hoped to find compacted sand near where the tidelines were and for sections at a time I would, but they didn't seem to last long. Otherwise I was constantly fighting small slopes of sand, loose sand, rocky sand, and other obstacles including an increased amount of people. It proved impossible to keep up much of a pace through here and so I just slogged on whether running or walking. On the plus side, it is a beautiful endeavor and I could even see the Chicago Skyline over Lake Michigan. It was also an eye-opening thought to think that this summer I've now seen Lake Michigan from near its very southernmost point and its northernmost point. A few weeks back we took a family trip to the Upper Peninsula and on the day we drove home we were on highway 2 heading for St. Ignace along the northern tip of Lake Michigan, incredibly beautiful up there. 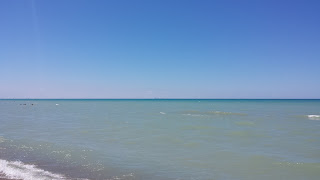 As I neared the main beach area for the State Park the beach became packed. It appeared as though most of Chicago had come over to the Dunes to enjoy a Saturday afternoon. I walked through all of the crowds to regain the parking lot and then headed on to the very nicely boardwalked Beach Trail. This headed through some beautiful terrain back to the campgrounds. I jogged on the camp roads to a tiny connector that then put me back into my starting point in the Nature Center parking lot.

While it was an enjoyable loop, with beautiful moments, the beach section proved to be very difficult running. The first two miles of the forest section would be fun to do again as an out and back. After this run I was drenched in sweat and looking for a change of clothes but I had one more run to do. 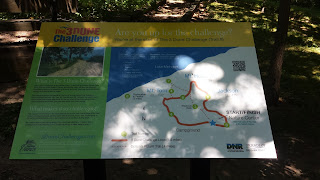 My third trail run at Indiana Dunes got changed up a bit from my original plans. Despite my efforts to get fresh clothes on me, the sweaty, soggy state of my body from the day's exertions and heat had left me with bad chafing. This left me in a state of pain with any running I would do. My previous two runs had me at 10.7 miles for the day and so I decided I would do the recommended "easy" version of the Three Dunes Challenge to complete my time at the Dunes. I had originally hoped to run trail 8 from the Nature Center over all 3 dunes and then to the lake, and back. The sign suggested hitting the 3 dunes for the challenge and then taking the easier trail 4 back. So I did.


The trail again leaves from the Nature Center area and was well signed. Fairly quickly it begins an initial sandy ascent which made for a slow pace. It leveled out for just under a quarter mile until the ascent up Mt. Jackson. Most of the dune ascents were in the 30 degree range and loose which meant a power-hiking pace at best. As I worked my way through here I passed numerous people going both up and down the dune.


From Mt. Jackson it was a quick down and back up over to Mt. Holden for dune #2. I thought it nice the State Park had excellent signage for their "Three Dunes Challenge" which it appeared a number of people were doing. They even offered free stickers and other memorabilia (for purchase) to folks who really wanted to get into it. From Mt. Holden it was a slightly lengthier stretch through the woods until the ascent to Mt. Tom. In this stretch the trail passes a junction with Trail 7 and then just before Mt. Tom Trail 4 joins up with Trail 8 to ascend a staircase up to Mt. Tom's summit. This ascent was so steep I could see why a wooden staircase was used as opposed to people scrambling hand and feet, and eroding like crazy, this last stretch. Mt. Tom's summit was all on boardwalk and even the initial descent on Trail 4 from the summit remained on boardwalk. From there it was an easy, mostly sandy descent back to the campgrounds and then on to the Nature Center. The distance turned out to be a bit shorter than advertised but it was still a fun, albeit, less runnable loop.