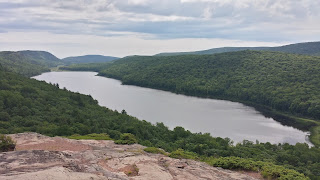 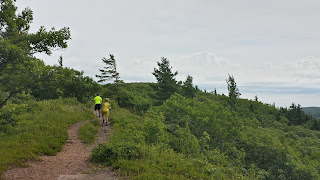 This had been described as one of the, if not *the*, classic hikes in the Porcupines. The Lake of the Clouds area is certainly one of the most recognizable in the Park. The aptly named Escarpment trail runs along the top of the escarpment starting from the LOTC overlook and ending at the Government Peak trailhead along the road. 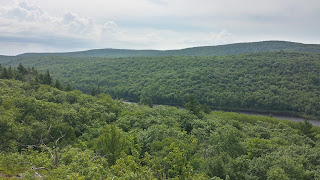 The beginning 2/10s of a mile from the overlook are a nice wide tourist trail to get you started but then it quickly turns into a typical forest dirt trail. Our group of hikers today included myself, my two older sons and my parents. We weren't seeking to set any speed records today. I carried my Rev6 hydration pack with water for myself as well as a nalgene with water for my boys. I didn't carry any food, though in hindsight I realize I should have. 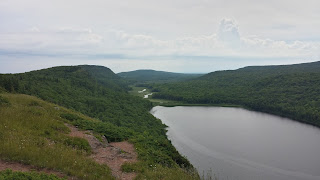 The trail descends at the start down to the junction with the North Mirror Lake trail where we had ascended up yesterday. It then continues on within the first mile to ascend up one of the first humps along the escarpment. Every once in a while a beautiful open vista would come along and we'd snap pictures. We were also stopping frequently for rests and for water as it was quite warm for us. 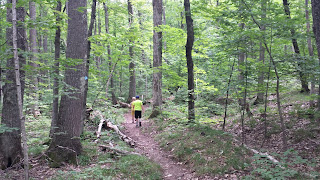 At about the halfway point along the trail you'll have reached the northeast end of Lake of the Clouds and it offers then another beautiful perspective on this scenic lake. It also opens up the views to the northeast of the valley that drains into the lake.


Just after that halfway point which is on the top of the second of the humps the trail descends through thick forest to a junction. There is a shortcut trail that leads out to the highway that someone could use to bail if necessary. Of course you would be needing someone to pick you up along the highway where the trail meets it. I don't recall there being any good signage along the road for the meeting point. 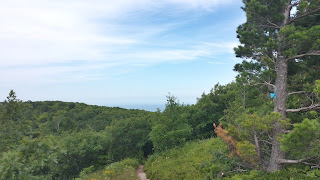 We ran into a trail crew of two guys near this junction working on clearing back a downed treed and other brush near the trail. We didn't stop long to chat though as the bugs were pretty bad in these parts. Not long after the junction the trail began its final but also biggest climb to gain Cuyahoga Peak. In this area my two older sons and I got ahead of my parents and remained so for the rest of the hike. My two boys were really something. On one hand they were nearly brought to tears by the constant flies and mosquitos. On the other hand, they were sure motivated to hike and they even trail ran for a bit with some a desire to get out of there. On this hike was my first time the entire trip in the U.P., including Isle Royale, that I came out with a few bug bites. I'm pretty sure it was the flies. 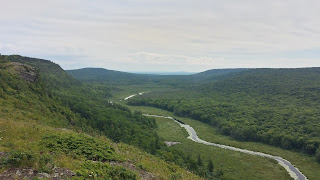 I was disappointed as we neared the top of Cuyahoga Peak, at least according to my GPS, that there was no marker or mention of it, though technically we didn't gain the summit proper there on the trail. My boys and I moved quickly on and then began the descent. That was my boys fastest bit of hiking yet as we made the mile long descent of nearly 600 feet of vertical in only 20 minutes. They were ready to be done with the bugs. We made it out to my parents truck at the trailhead and prayed the bugs would leave us alone in the parking lot, and largely they did. We waited out my parents who were still behind on the trail so that we could all drive back to the LOTC overlook together to get our shuttle vehicle. I had originally planned to re-hike or trail run the whole Escarpment to get the shuttle vehicle but this is where bringing no food did me in. It was 2 in the afternoon, I'd had a small breakfast and I was hungry. Trail-running another 4 miles with elevation on an empty stomach seemed to be a bad idea, and so I bailed. 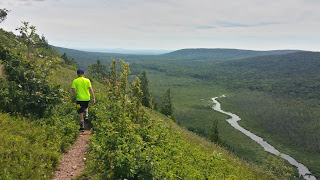 For our last U.P. hike of this summer this was a good one. It was a great trail all the way and easy to follow and seems to be well taken care of given its popularity. Its well worth a try and easy for most hiking parties to do, especially if you can shuttle hike it.