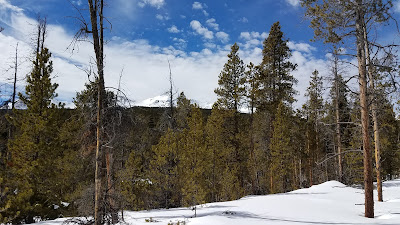 Having just completed wonderful days on our winter trip to Colorado with a summit of Mt. Bierstadt and a great day of skiing at Copper, we were looking for one last enjoyable mountain activity before we flew out of town.  In fact, we had flights leaving around 8pm this evening so we needed something without complications.  Snowshoeing fit the bill.


For a number of years I have been looking at the Highline Trail near the Leadville Fish Hatchery as a great snowshoeing option.  Given the amount of snow in the Leadville area we figured the trail in the trees would be full of it this year.  I had a basic track of the track and maps on my BackCountry Nav app like Accuterra and the Open Cycle Map showed the basic outlines of the trail.  So we set our sights on it.  We arrived at the parking lot at the Fish Hatchery and followed the signs that pointed towards "Hiking".  There at our parking spot we encountered the following maps which really helped us make our plans for the day: 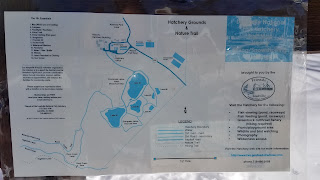 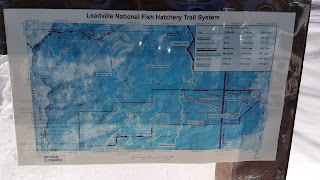 We weren't looking to do anything terribly strenuous today and so decided that the Kearney Park Loop at 5.5 miles and 1300 elevation looked perfect.  We weren't sure how easy things would be to follow once we were back in there but we decided to give it a go.  We did some basic packing and each had a light pack on with water and started up the road seen in the next picture: 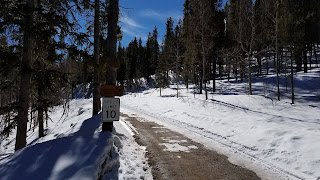 This quickly led us to a parking and picnic area that was mostly snow covered. We were also near the edge of the first of the Evergreen Lakes.  It was here we first donned our snowshoes and then followed the clear packed trail and the well-marked signs into the woods.  The following photo shows this first bit of trail and also Evergreen Lake in the background.  The tracks on the trail from XC skis and snowshoes were quite evident. In fact the traffic had been so much things were compacted enough that snowshoes weren't even necessary yet. 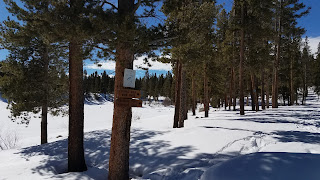 It wasn't long and the trail made an obvious right turn.  We were at this point following the signs that said "Rock Creek" and "Highline" as those two trails held together at first.  The Rock Creek/Highline trails are part of the southern leg of the Kearney Park Loop.  The following two pics are a look at the next of the Evergreen Lakes we passed during the aforementioned "right turn". 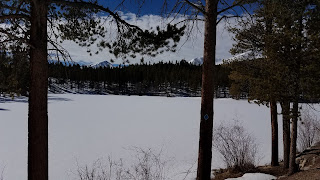 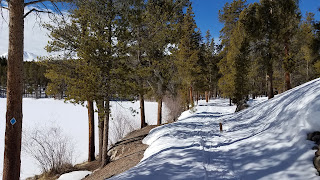 The trail had some small hills with a bit of climbing at first and was otherwise just beautiful walking in the woods.  The temps must have been in the lower 40's and with the sun out things felt really good.  We would pass two more junction signs that pointed us either to Rock Creek or Highline, the next photo shows the first of them.  The signage at all the junctions made navigation much easier. 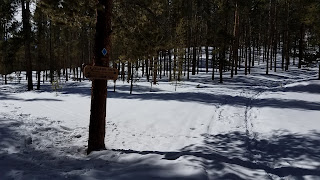 We encountered a section with even steeper climbing though it didn't last long.  We probably gained 100-200 feet in under a quarter mile.  The next photo is a typical shot of some of the early trail.  The track was great.  We noticed a number of signs encouraging snowshoers to hold to the right side of the trail so XC skiiers could have a good track on the left.  That didn't happen much. 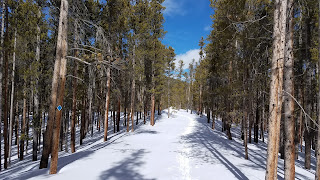 We encountered a second junction for Rock Creek and Highline.  What we were concluding is the first was pictured above was the main break where the Highline trail heads south.  The second one pictured below is a shortcut trail heading down to the Highline allowing for a small loop.  Another day we might be interested in following the Highline though we noticed today it has a lot more elevation climb involved to reach the Colorado Trail, more than we wanted to tackle today. 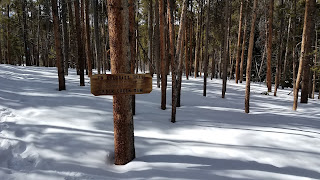 At this second junction sign for the Highline we had a good stop and dropped some layers of clothing.  I tossed my gore-tex jacket and just had two long-sleeve tech layers on.  Probably could have taken one of them off as well.  I also took of my winter knit hat and gloves.  Between the physical work and the sun we were feeling great.  The next section of hiking had us on the north side of what would be a marshy area in the summer.  Much of this reminded me of the trails I hike in Michigan where the trees surrounded us with their own grandeur and occasionally a view opens up to something in the distance.

We occasionally were given beautiful views of Mount Massive in the distance.  We have not been to its summit since 1996 and it seems like an eternity into our past.  Its on my list to try again probably in a summer in the next few years.  We had a nice stop in this beautiful area and snapped a few pics including the 360 photo that is below:

We had kept our eyes on time to some extent as we wanted to be back to the car by 2pm if possible.  We were planning in plenty of time to make our drive to Denver, have time to repack and possibly hit REI Flagship, and then be at the airport.  It was just before noon when we hit the Colorado Trail which was one of our goals for the day.  We had been out an hour and 45 mins.  We knew from the maps there was a solid several hundred foot gain to continue on the Colorado Trail to the other part of the Kearney Loop.  We also didn't know if there would be tracks on that section or if we would be breaking trail.  Up to this point we had been following the tracks of an XC skiier and some old snowshoe tracks that made navigation a cinch.  We debated a few minutes while grabbing a snack and decided to go for it.   In hindsight: good choice.


During our initial ascent on the Colorado Trail we did have good track to follow and we were intrigued by the rocks we found that had more than 2 inches of snow still on them while the sides had melted out from the sun. In the next two photos I tried to capture these odd sights.  They looked like rocks with hats or as I finally jokingly remarked "they look like smurf rocks". 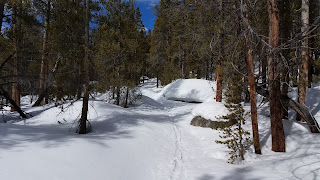 The ascent on the Colorado Trail was about 300-400 feet of gain over just a half mile so we had a bit of hard work on the snowshoes.  It did finally level out once again.  In this back area of the loop where the traffic had died out we were very glad to have the snowshoes as they became necessary.  We never postholed badly on trail but were easily sinking in 6-8 inches.  There was still a lot of snow in there!  We reached the junction for the Swamp Lakes extension and proceeded past it.   Not long after to our left we saw a beautiful meadow with perfectly pristine snow still over it.  Would have been so fun to run around out there making virgin tracks.

Not long after the meadow we encountered the sign junction for the Kearney Park Trail which was simply labeled as "Fish Hatchery".  We were most pleased to see that the basic track was still ahead of us leaving no real need to worry about breaking trail or navigating. 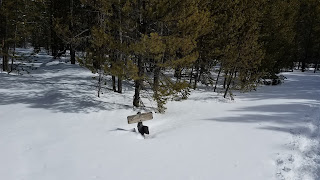 The snow in this area was just beautiful true.  For me, there is something calming and satisfying about following simple tracks in the snow and seeing a well-laid snowshoe trench.  In fact, I often find myself looking back at the trench that I've laid just to marvel in it for a moment passing. 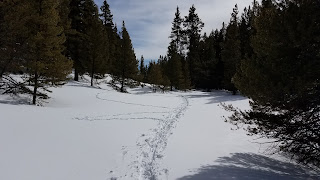 This part of the loop was thankfully all downhill and it didn't waste any time doing so.  We found this downhill part to have some of the steepest trail we had encountered.  We could only imagine the cardio workout it would have been trying to ascend this first.  In some parts the trail was squeezed rather narrowly and just packed full of powdery snow as the trail was following a small creek drainage. 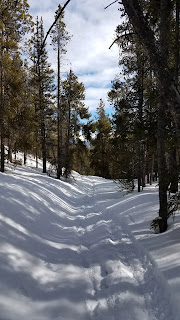 There were only just a few opening views to the Arkansas River Valley and the beautiful terrain south of Leadville.  This trail had a few moments where it wound around in the woods but was always easy to follow.  We also noted all throughout there were blue diamond placards on trees at certain intervals to help in the winter.  There were even a few in this section noting sharp turns in the trail at a point where it crossed over the creek.  As we began to finally approach the end of the loop where the trail dropped out to CO 300 we were glad we had done this loop as it was.  It is much easier to start on the side we did as this trail pops out onto the 300 road just north of the fish hatchery and actually we're not sure exactly what that looks like or if it is easy to find.  As we neared the road the ski track we followed made a southerly shortcut in the trees and snow to avoid the road and drop right into the Fish Hatchery complex.  We did the same. 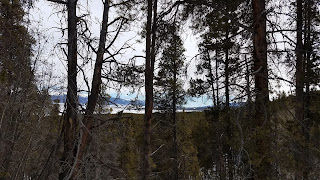 We look forward to returning to the trail system at the Fish Hatchery.  There are quite a number of great opportunities summer or winter for great hiking and snowshoeing (XC skis as well!).