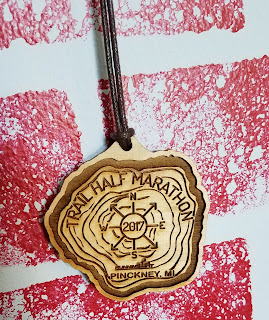 This was my third go-around racing the Trail Half and I was excited as ever.  This year's training has been some of my best ever.  I was finally approaching this race with preparation that had me at about 100%.  With that came higher personal expectations so I felt a little bit of the self-imposed pressure.

This was the warmest morning I've experienced at the Trail Weekend.  The temp was around 50° which meant I could do my pre race routines without having to huddle in my car with the heat running.  I left my place about 5:40a this time and made a stop at Panera in Ann Arbor for a bagel.  I also ate an apple and an oatmeal square along the way.  I kept a banana in the car which I ate about 10 minutes pre-race.  Upon arrival I found that this year they were checking for the Michigan State Park Pass at the booth as folks drove by, a change from previous years.  Thankfully they had that streamline and it didn't slow up traffic.  I pulled into the lots just before 7am and had very good parking as usual.  I went to registration where they had folks filling out waivers and then grabbed by shirt and bib.  I did a bunch of walking around, ran into a few people I knew and ran about a half mile warmup on the trails.  I hit the bathrooms once about 7:15a and found the desire to do so again about 7:45a.  I hit the bathroom by the bike trailhead and the line didn't free me up until about 7:52am.  This left me 8 minutes to change clothes, get my bib on, and hop on over to the race start.  I made it with about 90 seconds to spare.

I wore my blue Salomon shirt and my 2-in-1 compression shorts.  I had on my relatively new Salomon Speedcross Vario trail-runners and that was about it.  No extra layers, no gloves, no cap this year and clothing worked to perfection.  I had given consideration to foregoing my Rev6 pack but in the end decided for it.  The race is trying to phase out paper cups and this may require the pack in future years.  Mid-race I was also glad to have the hydration as its always nice to drink when Iwant and nice to have the water for taking GU or Endurolytes.

Pre-race I just had a banana.  Mid-race I popped a salted caramel Gu just before the mile 4.5 aid station and a blackberry Gu right before the 9 mile station.  I also popped endurolytes about 30 minutes in and I was going to take 2 more about mile 10 but I ran out of water with the first one and so I tossed the second one.  I did hit up each aid station for a quick swig of gatorade and that was about it.  The only gaffe I had was I did run out of water in my pack just after the 9-mile aid station.  I had brought about 0.6 liters knowing it was slightly warmer than previous years and I could have used a bit more.  Last year I didn't hardly drink any so finding the right balance without carrying to much remains a slight mystery.

This race perhaps more than any I've done previously illustrated how overall results and age group results leave one at the mercy of the luck of the draw.  I've really desired to place my age group at this race with it being one of my favorites.  In 2015 I was 6th, in 2016 I was 7th.  Expecting an improved time I was hopeful of getting it this year.  When the race ended and I had PR'ed by almost 2 minutes I was hopeful.  I was floored when I finally saw race results.  10th in my age group.  Us 35-39's must have owned this year as I think 5 of the top 10 runners were all this age group.   If I had run this time in 2016 I would have made 5th place by 5 seconds. Oh well.

As aforementioned, I had great training for this race.  I felt about as prepared as I have ever been for a race.  In my strategy I wanted to make sure I didn't start out too fast so I hopped in the second group to leave the start.  So they sent out the first group from the start and had the second group wait almost 2 minutes.  I tried to be close to the front of this group.  I even allowed a handful of people to pass me once we got going.  I kept an eye on my GPS watch and kept the pace reasonable.  In fact I did this the first 3-4 miles targeting about an 8:30 pace.  I should have done my homework more on my previous years and realized this was slightly slower than necessary.  In hindsight I should have pushed more like 8:20 and with my training, which I should have trusted more, I probably could have held it.   I was also hampered at points, as usual, by slower runners in front of me.  I found that from about mile 2 onward I passed at least 2 dozen or more runners and only had 1 pass me.  I was feeling really good on this.

I ran the whole first half feeling good and made it to Blind Lake pretty high on things.  I was expecting to be a minute or two ahead of previous years which were both around 54 minutes.  I was surprised to find I was right there at the same time.  This had me a little worked up thinking after all the work put in I might not PR.  So this motivated me well and I cranked things up a bit.  I had to work that hill after the road crossing beyond Blind Lake but after that is a nice straight slightly downhill stretch in which I really began to push the pace.  I was targeting 7:45 miles the rest of the way.  The Poto shortcut always provides a place to really burn it and I felt great blasting through there dropping more good splits.  I was feeling good still when I hit the Glenbrook Road crossing but shocked again to find I was still at exactly the same overall split as my previous two years.  I did some quick math in my head and knew if I could average under 8 minute miles over the last 4 miles I could still PR.  In past years miles 11-12 always slowed me down particularly with the big hill.  So I really pushed it putting in a lot of what I had left which to my surprise still felt like plenty.  I've had races, particularly in Trail Halfs, where at this point in the race if I were to push a sub-8 pace I just don't have the gas to do it.  Today I did.  I made my way to the last big hill, a doozy, I was out of water but I gave that hill everything I had and made it without walking.  My split pace before it was about 7:40, after it only rose to 8:40, so I hit it pretty well.  From that point out it was mostly all downhill and I really went for it.  In the end my last mile was a 7:15 and my split pace for the last 10th of a mile was almost an even 6 so I was really flying.  I was very pleased with the 1:48 finish.

It also left me thinking I could even beat it next year.  If my pre-race training is similar I think i can attack this course and drop another minute or so.  Dropping about 10 seconds a mile over the first 6 seems reasonable and finding even more time off overall makes is possible.  I've debated whether my slower early miles (which were actually even slower than 2016's early pace) were part of what helped me to have so much at the end of the race, or whether I still could have finished that strong and saved more time early.  Either way, this was my first Trail Race where I had strong negative splits and that was a really good feeling.

Upon finishing I got my medal, grabbed some pretzels and water.  I went to the car to drop off a bunch of things and then walked back up to the finish area to get a cookie.  The outdoor temp was still around 50 but I was starting to cool off.  Knowing i didn't have an age group award and seeing how low key things were at the finish this year I decided to head out and make it to the kids soccer game back home.
Labels: Michigan Running Trip Report
Location: Dexter Township, MI, USA