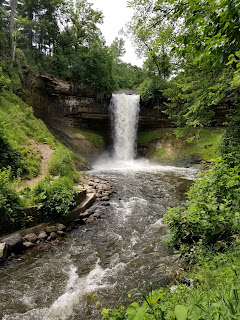 Trip Report:
Minnehaha Falls Regional Park is a treasure right in the heart of Minneapolis. While you're hiking on its trails you would never know you're in the midst of the city just a few miles from the airport. The views give wonderful seclusion from the city and the only interruptions are the nearby sounds of traffic. While on a 3 day stay in town with my wife Sarah enjoying a conference I took my boys on a hike here after looking for just the right hike without having to drive far. I put in just a little prep figuring out just how many different paths were available and how to access the falls themselves, and I researched the best places to park and that did it. I settled on an easy to access lot that would give us some reasonable distance to enjoy before reaching the falls. There are certainly places one can park that are much closer if the falls are the only destination. The parking lots are all pay lots but it was only for $1/hour which seemed reasonable for our simple hike today.

We parked and started walking northwest on the paved path that paralleled the regional bike path. We didn't have views of the creek and instead of was mostly like walking through a simple grassy park. We passed by a driving bridge that was closed that led into the Veterans Home. We followed the pathway as it wrapped around towards the top of a staircase that we followed downwards. There was a stop along the stairs leading to the first views of the Falls where we grabbed photos, and then followed the steps down to the creek where there was a bridge. I'll let our pictures of the falls do all the describing of their beauty. 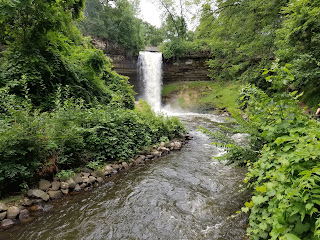 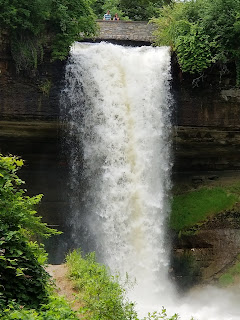 On the north side of the creek we followed another set of stairs back up out of the creek canyon. Here we saw the Sea Salt restaurant and we decided to follow some of the paved paths over to a Dairy Queen, just outside of the park, for a snack.

After our stop we headed back to the top of the falls and descended again the same stairs we had first descended on the south side of the creek. Here we made our best decision of the day. Instead of following the paved paths back to our car I wanted to try a trail at creek level for our return. This turned out to be a beautiful single track dirt trail.

It was simply beautiful trail to follow and very peaceful to be near the water and further from the surrounding city. Along the path we passed a few rock slopes that the boys tried to do some basic scrambling upon.

One section of trail was all boardwalk as it went through a very marshy area along the creek. We found a spot with a tiny island to stop and play around a bit and to put our feet into the water. It was cool but comfortable on the feet.


As we got to the second to last bridge heading east we went to the north side of the creek and followed it east to the Mississippi River. There was a nice beach there with a handful of people swimming in the water. Several kids were in and we hoped they didn't get too far out into the current.


On the south side trail near the Mississippi we have this mini cave on the canyon wall and checked it out. The rock was very soft, so much so, many people had worked graffiti carvings into it with initials and other drawings. It was a beautiful area but unfortunate so many people had taken to marking it up for their own selfish purposes. From there we followed the south side trail west a bit til we found a staircase trail leading back up to the edge of the canyon and the paved paths. It was then a short walk back to the car.

I wanted to get a hike in and I wanted the kids to get exercise with some good entertainment. This hike really checked all the boxes and we were thankful to have found it. 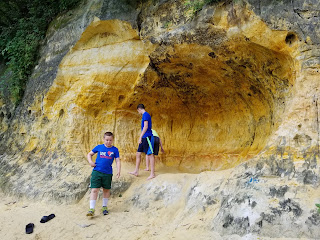