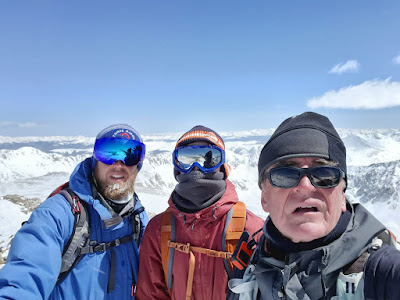 
Trip Report:
We picked a beautiful, ultimately blue-bird day to seek the summit of Quandary. During our drive through South Park and up to Hoosier Pass though we weren't so sure if would turn out like this. Clouds had the Mosquito Range and southern Tenmiles socked in as we drove on approach. Over Hoosier Pass there was a fresh half inch of snow on the roadway and we saw multiple cars losing traction. We were just glad to safely make the trailhead to start our day. 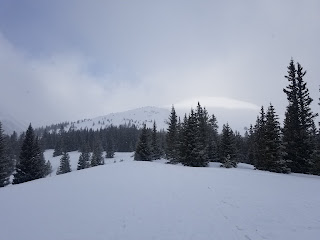 Today's crew would be myself, my father, and my oldest son Luke. For Luke this would be his second winter summit attempt and his first 14er repeat. [Disclaimer: I acknowledge this ascent took place in April outside of calendar winter. Our working definition of a winter ascent is one done in winter conditions] We had just completed three straight days of skiing and were looking forward to the chance to hit the trails and be on the feet all day. The weather for today was predicting a high of mid-teens for the summit area with 30-40mph winds. Nearby Breckenridge was slated for highs in the low 40s. For the most part this sounded like a good forecast for a summit. We hoped the winds wouldn't be too bad. 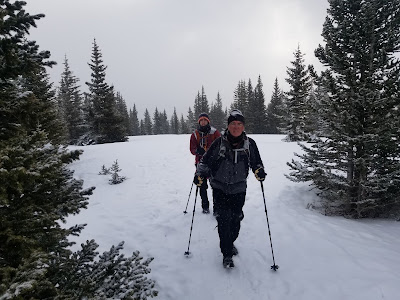 With Quandary, finding recent beta is never an issue, even in winter. We knew there would be a solid trench through treeline and we knew many parties were considering snowshoes so we planned to bring ours. At the trailhead we did find temps in the 20s and decided to start with microspikes figuring the snow surface would be firm to start. This was the right move. We had a great start working through the forested start having no issues staying on trail. We saw one other party in the lot as we started.
The beginning of route-finding for us took place at about 1 mile in. From there to about mile 1.5 the trees thin and there are several different tracks people have made trying to find a route. It takes careful paying of attention in here to pick a good path. Then from about mile 1.5 onward the route really disappeared today. There was no clear trench as the route diverged from the summer trail and left treeline. Building on that thought, the summer trail is really only followed through the thick tree cover in the first mile. After that the winter route (it probably does vary slightly from year to year) takes more of a direct bee-line up the East ridge to the summit.
At 1.75 miles in and just over 12,000 ft elevation we hit a nice flat area on the ridge. Being out of treeline we began to think we'd drop snowshoes here and use the crusty snow to climb the rest of the way. We had heard of other recent groups making this choice. We made it about 2 minutes from our drop point and began to break into the snow about 3-6 inches with each step. Couple this with a view of unbroken snow and a hefty slope to climb and we made a quick executive decision to not only bring the snowshoes but to begin to wear them. We are so glad we did. We believe the weight of wearing the shoes was offset by the energy saved with the perfect flotation and perfect traction we gained.
Over the next mile we really got our money's worth. The climb from 12100 to 13100 was a real grunt today. We made regular short stops in here to let the legs and the lungs recover. It was a firm reminder was a difficulty any winter summit can be in snow conditions. When we finally hit the flat saddle around 13100 we now made the decision to drop snowshoes. The snow was windblown and there was ample walking over rocky sections where the snowshoes would be a hindrance. We could also see a few groups above us on the summit climb and it appeared the snow would not require any more flotation. In hindsight this would prove to have been the right choice. We dropped the snowshoes and put on the microspikes again.
In the last 1000 foot climb we ran into a pair of guys skinning with their AT skies to the summit. Some of the slope was just steep enough combined with firm enough snow that he ditched his skis to climb in boots for awhile. We were absolutely glad to have the microspikes. There was a two or three hundred foot section where the snow had filled in the rock of the summer route so much, it created a snow climb that got your attention. It wasn't a crampon-ready slope but it was enough to wake your attention from what is otherwise a class 1-type trail with no exposure. Traction was a good thing here.
The winds were howling off and on during the summit approach but they never reached a level that hampered us or threatened to knock us over. As we neared the summit we could see perhaps 10 people or so up there and some were already preparing to leave. There was one group of 3 ahead of us coming down on foot. The others all appeared to be ready to ski down. The pair we met earlier were headed for the couloir on the northeast side and would take McCullough Gulch out.
We summited right around noon. My tempe sensor said 12 degrees and the blowing wind probably made for a sub-zero wind chill. The sun was out though and with our layers and gloves we were keeping reasonably warm. We only spent ten minutes on top as the cold and the wind would not allow for much of any comfortable sitting or rest. I even saved my favorite summit snacks for the descent. 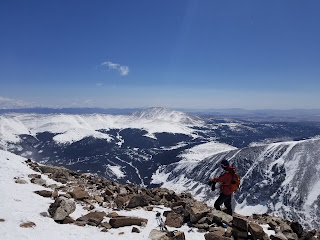 The steep snow area was giving the group of three ahead of us some troubles on the descent. We actually caught up to them and passed them for a bit. The microspikes were offering near perfect traction while they were either using naked boots or we think one was trying yaktrax. They were clearly struggling for traction and uncomfortably trying to descend. Seeing this and considering our other past experiences, we're pretty sure we'd never attempt a winter summit without bringing along microspikes. 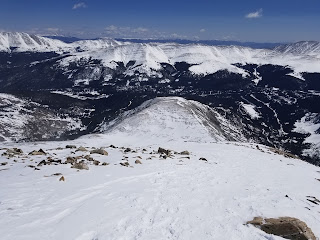 We donned our snowshoes from our stash at 13100 and would end up wearing them almost all the way back to the trailhead. In the afternoon sun the snow above treeline was mostly still holding firm. The temps were just cool enough. We trudged down the long slope to 12000 step by step. The snow was just soft enough to make a glissade impossible. Heading back into treeline we had to do a small bit of route-finding on the various tracks to make sure we hit the summer trail. Once back in treeline it felt like things really warmed up and we were shedding layers as much as we could. My tempe sensor was low 40s as we neared the trailhead. Parts of the last quarter mile heading to the McCullough Gulch road were starting to melt out entirely forcing us to carry the snowshoes the last little bit.
We felt our gear choices pretty much hit right on today. The snowshoes were effective for the parts we wore them. We were glad to have stashed them at 13100 and not carried to the summit. We had the right thermal layers and gloves for the rest of the body and stayed mostly comfortable. Just a few moments with fingers that got cold for a time. We never wore balaclavas today and relied upon regular winter knit hats and I wore a buff as a neck warmer which served well. 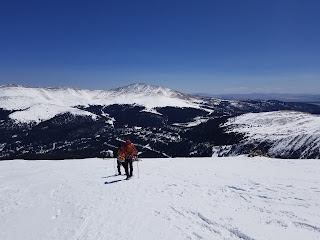 This marked my 7th time up Quandary with two being in winter and five in the summer. For Luke this was his first repeat. He's up to 10 unique 14er summits but the short list of safe, avalanche-free options in winter has now necessitated the start of repeats. But we are reminded that we enjoy the time spent together and the fun of any summit over another checkbox on a list.
Track:
I have a track and waypoints from the hike all contained in the embedded Google Map. Check it out and use at your own risk.
Labels: 14ers Colorado Hiking Trip Report Winter
Location: Quandary Peak, Colorado 80424, USA